If there’s anything Democrats have learned during the stimulus debate, it’s that a tremendous amount of power rests within the hands of a relatively few individuals. These individuals are a group of perhaps a dozen moderate Senators — on the Republican side, Olympia Snowe and Susan Collins of Maine, Arlen Specter of Pennsylvania, George Voinovich of Ohio, Dick Lugar of Indiana, Lisa Murkowski of Alaska, and Bonnie Newman of New Hampshire, and on the Democratic side, Ben Nelson of Nebraska, Evan Bayh of Indiana, Claire McCaskill of Missouri, Joe Lieberman of Connecticut, Blanche Lincoln and Mark Pryor of Arkansas, and Mary Landrieu of Louisiana. The success — or failure — of the Obama administration will probably be determined by these Senators and a few others like them.

Having just one more reliable Democratic vote — instead of having to play Bipartisan Boggle with the group of moderates — would make a tremendous difference to the Obama administration in areas like health care and energy security. Likewise, having one fewer would give Mitch McConnell much more leverage in blocking Obama’s agenda.

And yet, the Obama Administration still seems to be considering cabinet appointees that would deplete their own ranks in the Senate. For instance, Ron Wyden of Oregon is reportedly under consideration to be Obama’s Health and Human Services nominee. But if Wyden is appointed, the Democrats would be out a seat at least temporarily, since Oregon is one of those states that requires all Senators to be replaced by special election, and possibly permanently — special elections are unpredictable things, and they may be especially so at a time when Republicans in Oregon might be more motivated to turn out than potentially complacent Democrats.

Likewise, Kathleen Sebelius of Kansas, also under consideration for HHS, might require the Democrats to pay quite a deep price in terms of future legislation. Sebelius is the favorite if she decides to run for Senate in Kansas in 2010, a possibility that is presumably mutually exclusive with her becoming head of HHS. Without Sebelius, however, the party has no chance to win the seat in Kansas.

This is not to say that Wyden or Sebelius wouldn’t otherwise be strong choices to head HHS. Wyden’s domain knowledge in the health care sector and Sebelius’ ability to appeal to bipartisan constituencies would both be rather valuable assets. But I don’t know if they’re as valuable as the possibility of giving up a Senate seat — particularly in the case of Wyden, whose loss would be felt by the Democrats immediately.

Nor is it as though there aren’t other viable alternatives, most notably this guy, who combines domain knowledge and salesmanship ability, and — by the way — is out of a job for the time being. 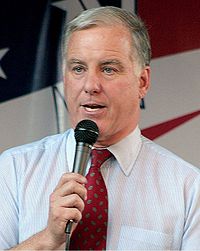 I don’t know what the administration’s issues with Howard Dean are. But whatever they might be, it’s hard to imagine that they’re worth losing a Senate seat over.