Sunday’s bombing in Kampala, Uganda, dubbed the “World Cup” blasts by much of the media, killed at least 60 Ugandans and perhaps a dozen foreigners, including people from India, Ireland, Eritrea and the US. The incident has thrust the nation into an uncomfortable spotlight, with the international community quickly identifying links to Al Qaeda, militant radical Islam in the east Africa region in general, and alleged connections to the Somali rebel group Harakat al-Shabab al-Mujahideen or “Al Shabab.”

Ugandan police have suggested that the actual attack maybe have been perpetrated by members of a Ugandan group, called the ADF (Allied Democratic Forces), who are based from nearby D.R. Congo. 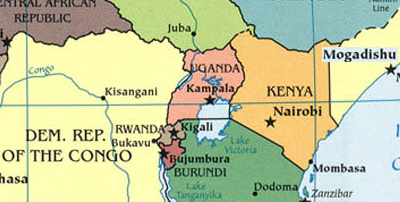 The attacks are indicative of the complex, troubled and often contradictory state of affairs in the Great Lakes region, as well as broader East Africa (including Sudan). Each country in the region has pockets of discontent, rebellion and in some cases, outright war, ranging from the ethno-political battles of Sudan, Burundi and Rwanda to terroristic marauding by armed groups in the Democratic Republic of Congo, the Central African Republic, northern Uganda, and elsewhere.

1. Somalia. To begin with, it is not surprising to see Al Shabab claiming responsibility for the Uganda attacks, regardless of whether they carried out or supported them. Both the Ugandan and Burundian military have troops stationed (and occasionally fighting) in Mogadishu as the firepower that supports the African Union’s AMISOM (AU Mission in Somalia). AMISOM, which has both an AU mandate and a UN Security Council mandate, was established in 2007 to support the interim Somalia government. Al Shabab, among other anti-government movements, opposed the deployment of peacekeepers, denouncing them as meddling intruders who would be attacked if they did not leave. Since 2007, over 50 AMISOM soldiers have been killed, and nearly 100 wounded.

That said, the AMISOM mandate was crafted almost exclusively to avoid a coup, rather than defeat any of the insurgent movements, pacify the country, or protect Somalia civilians (like the NATO mission in Afghanistan for example). The Ugandan and Burudian soldiers basically protect key installations, like the Airport and Presidential palace, from attack by rebels. With the Kampala attack, however, (US-backed) Ugandan President Yoweri Museveni has promised to send more troops, and to expand the role of the peacekeeping force to an offensive one as well, with license to attack and destroy insurgents.

2. Uganda. Uganda’s most famous and feared rebel group was actually not at all involved (as far as we know, at least) with Sunday’s bombing. Called the Lord’s Resistance Army, this group has wrecked havoc in the Great lakes region since the late 1980s, though operations by the Congolese army, the Ugandan military, and the United Nations peacekeeping force in DR Congo (MONUC) have landed blows against the group.

The LRA are a bizarre bunch. Basically, in the last 25 years they have wandered to raid, pillage, rape and kill from Uganda to eastern Central Africa Republic, northeast DR Congo and southern Sudan. Occasionally supported by the Khartoum government in Sudan as a retaliation to Museveni’s support for the SPLA/M rebels in Southern Sudan (Juba, et al.), they began as an anti-government group in Uganda. Over time, however, it became clear that the LRA had almost no coherant ideological mooring, but instead existed as a group of brutal, terroristic and egotistical bandits that used child soldiers to commit shocking atrocities. To call them a band of psychotic thugs would be a compliment.

The second group, the Allied Democratic Forces, were previously more politically involved (in opposition to the Museveni regime), though had been driven by Ugandan and Congolese forces to near extinction. Mainly because they were linked to the Kampala bombings, DRC military operations began yesterday against what is left of the group in Northeastern DR Congo.

3. Eastern Democratic Republic of Congo, Rwanda and Burundi. With the so-called Second Congolese War ending in 2003, many hoped that peace consolidation and recovery would take place quickly and effectively. After decades of conflict in the region, including the Rwandan civil war (1990-1993) and 1994 genocide and the Burundian civil war (which did not officially end until 2005), the departure of many foreign soldiers, and a committment from regional governments to support the transitional government of now President Joseph Kabila (son of assassinated former President Laurent Kabila).

Unfortunately, cross border rebels from Rwanda and Burundi continue to operate in DRC, while the Rwandan government, under former Tutsi rebel leader Paul Kagame, continues to have designs on land and minerals in the eastern DRC. At the same time, instability continues to plague Burundi, with election violence threatening the ongoing election season in that country.

Other key things to consider in the region are the upcoming referendum on the status of Southern Sudan (expected to vote to break off from the Sudan), tensions in northern Kenya among pastoralist groups and between pastoralists and settled communities, and the growing international understanding that high-value mineral resources are funding arms and armies in the region.

From a western perspective, it will be important, as we respond to the Kampala attack, to view the events and conditions in context. Any kneejerk reactions that paint the violence strictly in terms of religious conflict, ideological extremism, or even international political maneuvering, are likely to be off target.

It is true that, though, that Uganda under Museveni is viewed as a strong ally of US government, as the Americans have long supported his regime, providing weapons, monetary aid and political support. This, in addition to the expressed AMISOM reasoning for the attack, may explain broader connections to Al Qaeda’s (et al.).