This analysis is prepared in conjunction with Progress Illinois, which has posted a separate article on the findings. The Progress Illinois blog is relatively new to the scene — just as mine is. But it’s extremely well designed and extremely well written, and I hope that you’ll get in the habit of checking it regularly. Thanks to Josh and the rest of the gang for their assistance.

As the Democratic primaries come to their slow, if increasingly certain conclusion, the media narrative has tended to focus on the alleged inadequacies of each candidate: Hillary Clinton’s lack of support among black voters, or Barack Obama’s supposed inability to resonate with certain types of white voters. What has been lost, however, is a story that could turn out to have far more relevance for the general election campaign in the fall: the emergence of a “big tent” Democratic electorate that has increasingly begun to reflect the full diversity of America. 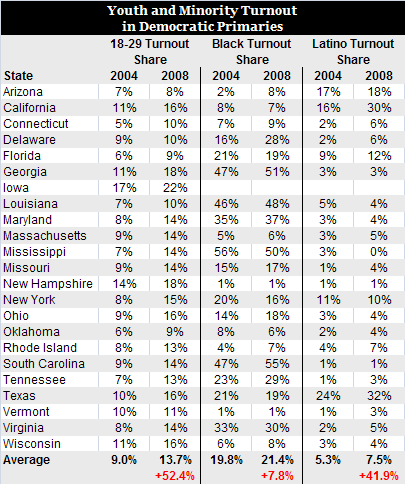 Today, we will examine the effects that increased turnout among these groups might have on Barack Obama’s general election prospects against John McCain.

What would be the electoral impact of an increase in African-American participation of 10 percent, 20 percent, or more? Fortunately, we have the perfect tool to examine such scenarios in the form of the FiveThirtyEight.com polling averages and simulation engine. Suppose that we start with a baseline assumption wherein total turnout in each state is equal to what it was in 2004, and that this turnout is divided between John McCain and Barack Obama according to their present standing in the FiveThirtyEight.com polling averages. This is probably fairly close to what most pollsters are assuming, as they lean heavily on statistics from the previous elections in establishing their turnout models.

We can infer the number of African-American voters in each state based on Census Bureau Data. For example, in North Carolina in 2004, there were approximately 3.5 million votes cast in the general election, and the Census Bureau estimates that 21.5 percent of these were from African-Americans. This equals about 750,000 votes. So, a 10 percent increase in African-American turnout would represent 75,000 additional African-American votes, a 20 percent increase 150,000 votes, and so forth. We distribute 94 percent of these new votes to Barack Obama and 6 percent to John McCain, in accord with Obama’s present advantage over McCain among black voters in recent polling. We then re-run our simulations with the new votes added in. Obama’s results at various levels of turnout improvement are below.

For each 10 percent increase in African-American turnout, Obama gains approximately 13 electoral votes, and 1 percent in his popular vote margin against John McCain. Even a 10 percent increase is enough to take him from a slight underdog against McCain to a slight favorite, while at higher levels of turnout improvement, Obama becomes the strong favorite. Meanwhile, Obama’s electoral map changes as follows:

Generally speaking, there are two regions where Obama stands to benefit from higher African-American turnout. The first is in the Rust Belt states of Ohio, Pennsylvania, Michigan, and perhaps Indiana. Although there are not enormous numbers of African-Americans in these states, there are certainly some, and given how closely these states have tended to poll, even fractional improvements in Obama’s numbers could produce large dividends. The other area where Obama can gain is along the southern Atlantic coast. North Carolina and Virginia would potentially be extremely competitive with higher black turnout, and to a lesser extent so would South Carolina, Florida, and perhaps Georgia. Louisiana might also become viable, although states like Mississippi and Alabama are unlikely to be.

We can run through the same analysis for youth turnout. Specifically, we will be focusing on voters aged 18-24. Turnout in this group has tended to lag badly behind that of older voters. In 2004, for instance, 46.7 percent of citizens aged 18-24 turned out to vote, as compared with 63.8 percent of the electorate as a whole. But these voters have become very engaged by the 2008 campaign, and it is not difficult to imagine a turnout increase of 25 or even 50 percent.

Most polling has shown Obama with a 3:2 or 2:1 advantage over John McCain among voters in the 18-29 age range. We will assume that Obama’s advantage is slightly larger toward the younger end of this range (18-24) and assign him 70 percent of the new votes, with the balance going to John McCain. The resulting scenarios are below:

Unlike the African-American vote, which tends to be concentrated in certain regions, there is not that much difference in the number of young voters from state to state. However, some areas do warrant a mention. There is a strong tradition of youth turnout in the Upper Midwest, which could help Obama to ensure victories in Minnesota, Wisconsin, and Iowa. Alaska is an extremely young state and could become a swing state with higher youth turnout. Texas and Georgia are also quite young and could become competitive with a strong youth turnout coupled with an improvement in Hispanic and black turnout, respectively.

Because Hillary Clinton has tended to do better with Latinos in the primaries, there is a perception that this group is not a strength of Barack Obama’s. In fact, however, Obama held leads over John McCain by margins of 57-33 and 51-41 among Hispanic voters in recent sets of Gallup polling. Increasing the share of the electorate that is Latino would definitely be to Obama’s benefit — albeit not quite to the same extent of the other two groups. We will assume that Obama gets 60 percent of any new Latino votes, and John McCain the other 40 percent. As just 44.1 percent of adult Latino citizens turned out to vote in 2004, improvement within this group could be comparatively easy to achieve.

Obama’s popular vote share increases only fractionally as a result of new Latino votes. However, these votes tend to be concentrated in electorally significant states. In particular, an increase in Latino turnout could all but assure an Obama victory in New Mexico, while also improving his chances in Colorado and Nevada.

Because they have polled so closely, this group of three states is among the most important in the country. Assume that Obama starts with the states that John Kerry won in 2004, plus Iowa where he is currently favored, but minus New Hampshire where he is currently the underdog. This gets him to 254 electoral votes, whereas he needs 270 to win. Winning those three states would get him to 273 electoral votes, just getting him over that threshold. In other words, if Obama wins these states, he would probably not need to carry Ohio or Florida to win the election.

As you can see, these effects are quite powerful when combined. The 40/20 Plan would gain Obama about 48 electoral votes, and improve his win percentage to 68.3 percent. Adding Latinos to this plan would improve his win percentage further to 71.7 percent. And under his best case turnout scenario, Obama becomes a prohibitive favorite to win the election, as states like Texas and Georgia could turn blue.

The ability to bring new voters to the polls remains Barack Obama’s most significant electoral advantage, both relative to Hillary Clinton and John McCain. Indeed, current polling may already be underestimating Obama’s strength against McCain if it does not account for improved turnout among Democratic-leaning groups like young voters and African-Americans, who have participated in record numbers in this year’s primaries. If Obama can parlay that advantage with a strong ground game, he very much could redraw the electoral map.