There are three demographic variables that explain almost all of the votes in the primary — gender, party, and income.

Each of these factors, of course, was important in determining candidate preferences in the Democratic primaries. But Penn gives short shrift to the most important demographic variable of all, which was race. (Penn did reference race in the sentence that follows this passage, but does so only in passing — “Race is a factor as well, but we are fighting hard to neutralize it.”).

Let’s look at a simple chart: 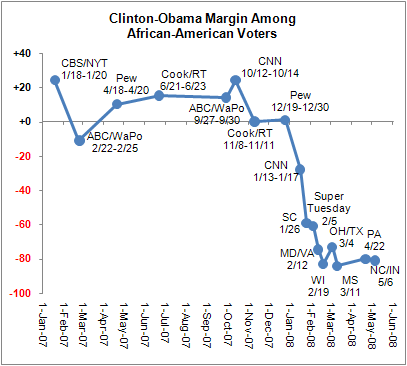 This tracks Hillary Clinton’s performance among black voters over the 18 months of the primary campaign — first using a series of public polling numbers, and then from South Carolina onward the actual voting results. Clinton began with, roughly speaking, a 20-point advantage over Obama among black voters; this was temporarily diminished by the excitement surrounding Obama’s entry into the race in early February, but had worked itself back up to as many as 24 points by October.

Some of Clinton’s support was undoubtedly very soft. Between October and November, Obama moved from about 20 points behind among black voters to essentially even with them, as the campaign coverage picked up, Obama had a chance to introduce himself, and Clinton had a few stumbles. There was relatively little negative campaigning during this period. But it was the period in between “now the fun part starts” and “Jesse Jackson won South Carolina” when the bottom really fell out, with Clinton losing about 60 points’ worth of African-American support in a month’s time. And things actually got a little bit worse thereafter, with Clinton going from a -60 among black voters in South Carolina and Super Tuesday (a margin that might have allowed her to salvage the nomination) to a -80 in the primaries that followed.

Overall, Clinton lost 100 points of support among black voters in about 120 days: a truly remarkable achievement. Since black voters make up about 20 percent of the Democratic primary electorate, a 100-point swing among black voters translates to a 20-point swing among all voters. And that, essentially, was how the primary was lost. In national trial heats, Obama was polling about 20 points behind Clinton throughout most of calendar year 2007, and wound up polling about 5 points ahead of her for most of the period after Super Tuesday. That is a 25-point swing, and 20 of those 25 points came from black voters.

It is clear from reading the Penn Memos that the Clinton campaign had very little idea this was coming. There is abundant discussion about how to squeeze every last nanometer of a vote out of groups like “waitress moms”, but very little substance about how to build or retain their support among African-Americans. Penn revealed himself as a pollster rather than a strategist; polls are inherently backward-looking, whereas a good strategist must anticipate future trends.

The question is whether this was more or less inevitable, or caused by specific behavior of the Clinton campaign. If the former, the Clinton campaign would still have had to chart a different strategic course. Penn had carefully constructed what amounted to a 55 percent coalition, but it was one that implicitly leaned on support from working-class blacks, and especially working-class black women, without which 55 percent quickly dissolved to 47 percent. If she had understood the softness of her African-American support, Clinton might have been able to target a different demographic instead, such as 18-39 year old white women, which might have implied a toning down of some of her experience rhetoric and more emphasis on her being a trailblazer.

The other option, of course, is that the Clinton campaign deserved every last black vote it didn’t get. After reading some of the race-baiting rhetoric in Penn’s memos, it is easy to jump to this conclusion. Penn, certainly, comes across as too cute by half, thinking he could press the narrative of Obama being un-American without the black community — not to mention the (predominantly white) liberal blogosphere — picking up on the subtext.

Clinton, to her credit, declined to press many of Penn’s more venomous lines of attack, although they came out occasionally through surrogates, including Clinton’s husband. More fundamentally, though, one senses that the Clinton campaign simply took the black community for granted, and didn’t understand how certain of their core lines of argument might go over with African-Americans. In particular, Clinton’s claims to being experienced were always fairly specious, considering that she had spent barely more time in elected office than Obama (less, if you count his years in the Illinois State Senate) and had relatively few accomplishments to her name (there is a humorous passage in one of the Penn Memos in which he begins to recite Clinton’s legislative achievements, but is unable to provide more than one example thereof).

The point, certainly, is not that Clinton’s “experience” argument was some kind of racist dog-whistle. But it was far less self-evident than Penn (and Clinton) seemed to assert, and raised the question of what exactly did give Clinton the right to take the first bite at the apple. If Clinton, by contrast, had campaigned on life experience rather than work experience, that might have resonated with a broader series of voters, including minorities. Clinton was effective when she campaigned on her biography, but she did far too little of it.