“We as a country will have to reckon with the fact that this type of mass violence does not happen in other advanced countries,” President Obama said earlier today, in reaction to the killing of nine people at a historically black church in Charleston, South Carolina, on Wednesday. The details of the case, including the motivations of the suspect, Dylann Roof, are still unfolding. (We encourage you to read coverage broadly, including from our colleagues at ABC News.) But I wanted to add just a little bit of context to Obama’s remarks — how the U.S. compares to other countries overall, and how that comparison obscures a wide racial divide: Black Americans are far more likely to be homicide victims than white Americans.

We’re looking for good data on the incidence of mass shootings in different countries. There doesn’t appear to be all that much of it. But mass shootings represent a tiny fraction of homicides overall. And thanks to recent efforts by the United Nations Office on Drugs and Crime (UNODC), which published data on homicide rates for almost every country, we can compare the overall homicide death rate in the U.S. to those elsewhere.

According to the CDC’s WONDER database, 5.2 out of every 100,000 Americans were homicide victims, on average, from 2010 to 2012. That’s not especially high by global standards; the median country had 4.7 homicide deaths per 100,000 persons over the same period,1 according to the UNODC data. The highest homicide rate in the world was in Honduras, with 87.9 homicide deaths per 100,000 persons.

But the homicide death rate in the U.S. — as Obama intimated — is more unusual in comparison with other highly developed countries. In the chart below, I’ve compared each country’s rate of homicide deaths against its Human Development Index (HDI), an overall measure of welfare and the standard of living.2 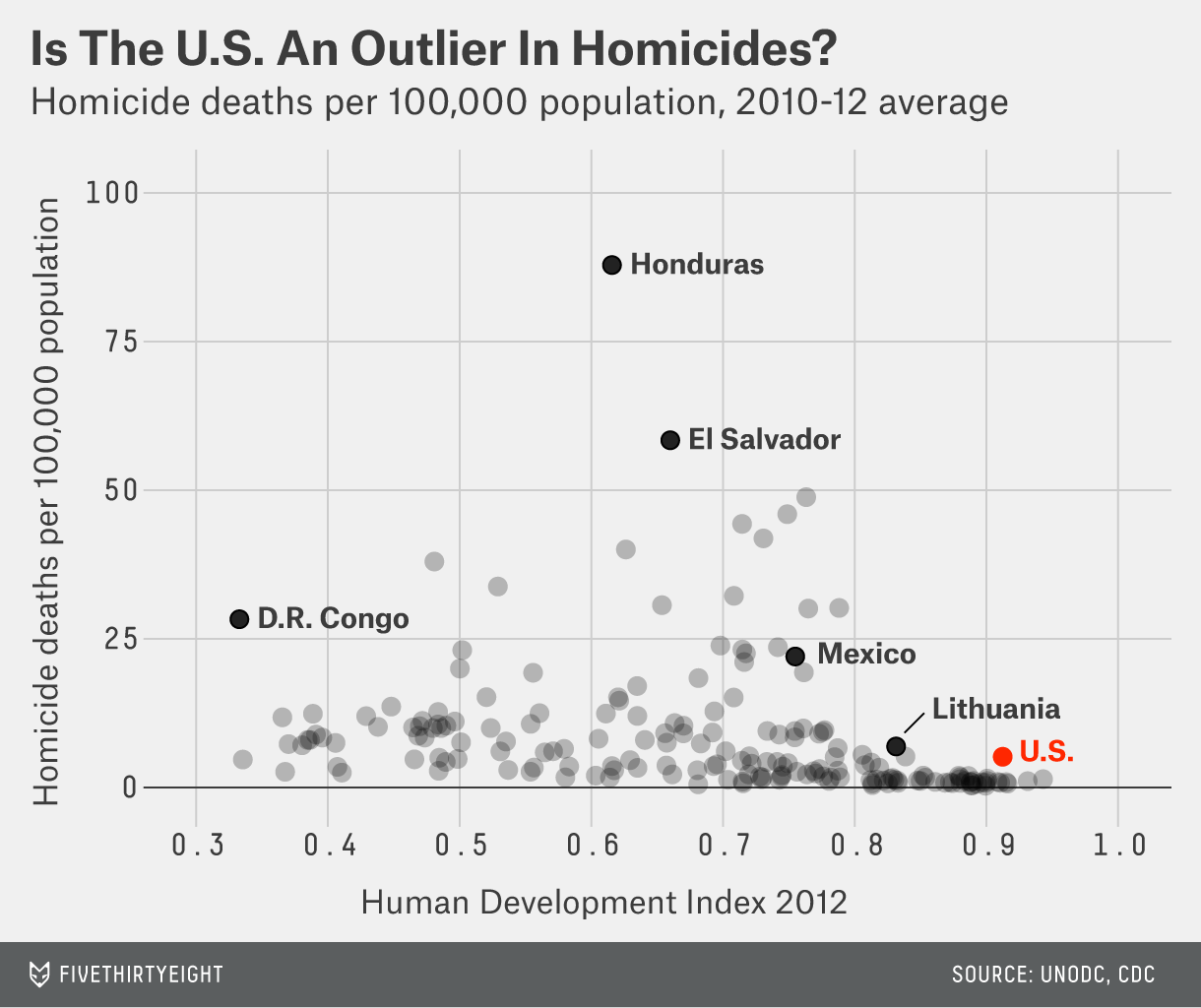 Whether the U.S.’s homicide rate qualifies as an outlier depends on exactly where you set the cutoff for an “advanced” country. Among countries with an HDI of .850 or higher — these are the 31 most well-off countries in the world — the U.S.’s rate of homicide deaths, 5.2 per 100,000 persons, is easily the highest. The next-highest are Brunei (2.0), Finland (2.0) and Israel (1.9). And the U.S. homicide death rate is more than three times higher than neighboring Canada (1.5).

But these comparisons neglect a massively important fact, and one that is especially pertinent in the wake of the Charleston shootings.

Black Americans are almost eight times as likely as white ones to be homicide victims, in other words.

So for white Americans, the homicide death rate is not so much of an outlier. It’s only modestly higher than in Finland, Belgium or Greece, for instance, and lower than in Chile or Latvia.

But there’s no other highly industrialized country with a homicide death rate similar to the one black Americans experience. Their homicide death rate, 19.4 per 100,000 persons, is about 12 times higher than the average rate among all people4 in other developed countries.

Instead, you’d have to look toward developing countries such as Mexico (22.0), Brazil (23.6), Nigeria (20.0), Rwanda (23.1) or Myanmar (15.2) to find a comparable rate. The Charleston killings were unusual in that it was a mass shooting — and also in that the suspect is of a different race than the victims (both black and white homicide victims are much more likely to be killed by someone of their own race.) But that doesn’t negate that the threat black Americans face from homicide is radically different from the one whites do.