Two more women accused Bill Cosby of sexual assault Wednesday, bringing the total number of accusers to 26, including 19 who have made public allegations. After an accuser stepped forward last month, Cosby’s lawyer, Marty Singer, called her “the latest example of people coming out of the woodwork with unsubstantiated or fabricated stories about my client.”

The allegations, though, appear to have swayed a sizable portion of the public. Cosby’s trust rating had fallen from 76.3 in March of last year to 57.1 by Nov. 19 of this year, according to Celebrity DBI, a rating produced by The Marketing Arm, a marketing and promotions agency, and powered by Repucom, a sports marketing research company. That pulled Cosby down from the No. 3 most-trusted celebrity (of the roughly 3,500 rated) to No. 2,626. He’d fallen from the company of Morgan Freeman and Dr. Oz to that of Brett Favre and John Calipari.

The ratings are based on answers given by 1,000 U.S. respondents, ages 13 to 75, who are shown the name and face of a celebrity. Those who know the person are asked further questions.

With so many celebrities in the database, and many ratings falling in a narrow range, the precise Cosby ranking should be taken with a grain of salt. Plenty of celebrities fall within the margin of error of his rating. “He is firmly clustered in the middle of the bottom 25 percent of all celebrities in our database with about 900 other celebs,” said Jordis Rosenquest, senior vice president of planning, insight and performance science at the Marketing Arm, in an email.

Celebrity DBI also scores celebrities on attributes other than awareness and trust, including appeal (consumer likeability) and endorsement (effectiveness as product spokesperson). Cosby’s awareness ranking has slightly increased, from 63rd to 51st, perhaps because of all the coverage of his accusers. His appeal and endorsement ratings, though, have followed his trust rating: from the top 20 to out of the top 2,500.

Celebrity DBI has competition, but some other celebrity-rating services haven’t updated their numbers since the recent spate of accusations against Cosby. E-Poll Market Research isn’t planning an update to its E-Scores for a couple of weeks. And Henry Schafer, executive vice president of the Q Scores Co., which produces Q Scores, said Cosby’s next Q Score won’t be available until next year. Cosby’s latest Q Score is from September, before comedian Hannibal Buress’s bit about the rape charges against Cosby renewed attention to the accusations.

Schafer said Cosby’s Q Score peaked at about 70 in the mid-1980s was among the highest Q Score anyone has ever had. (Tom Hanks is No. 1 now, at 39.) That means about 70 percent of people who recognized Cosby then thought very highly of him. His score gradually declined over the years but took no noticeable hit when Andrea Constand first publicly accused Cosby of “inappropriate touching” in 2005.

Q Scores are updated for everyone in the database every six months. Other companies’ scores, including Celebrity DBI, are updated on a rolling basis, so not all scores arise from the same date, “which makes it virtually impossible to compare across celebrities,” Schafer said. Schafer also said that polling in the middle of a scandal might overstate its effect.

Matt Fleming, director of talent acquisition for the Marketing Arm, said most people’s Celebrity DBI scores don’t budge much, but when a celebrity is in the news, they get scored promptly. That was the case for Mel Gibson, Tiger Woods and LeBron James, who all fell in the rankings after public missteps of very different natures. James has bounced back to beyond his pre-“Decision” ratings. Woods, after revelations of marital infidelity, and Gibson, after the release of recordings of phone calls in which he used racial slurs, haven’t recovered their losses. None of those three men was accused of rape. 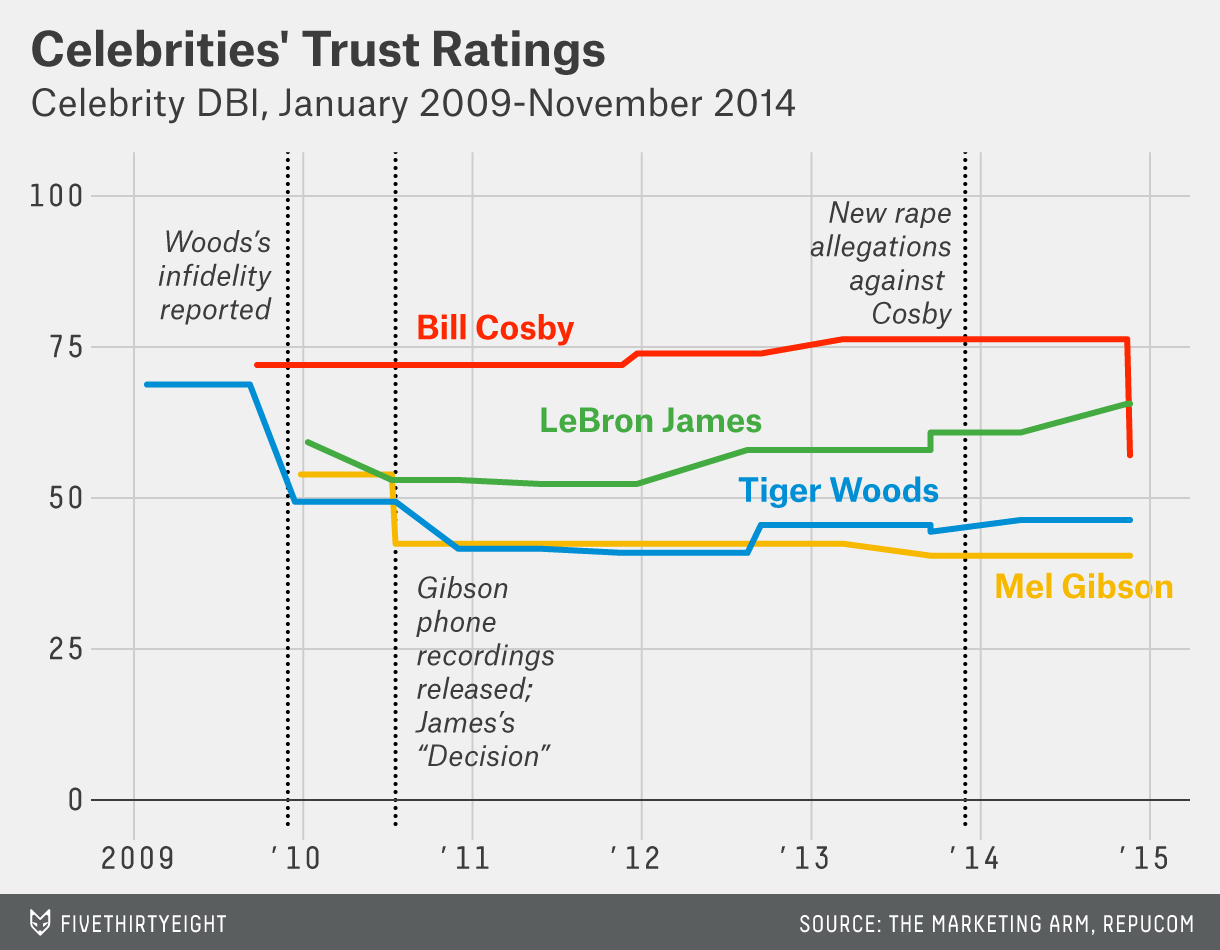 CORRECTION (Dec. 5, 4:09 p.m.): A previous version of the chart showed an incorrect trend line for Tiger Woods’s trust ratings during 2009. The chart has been updated.