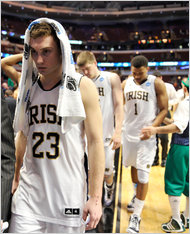 At some point during the second half of Notre Dame’s loss to Florida State on Sunday night, I started to imagine a New York Post back cover featuring a dejected-looking Ben Hansbrough, alongside a 72-point headline reading “BIG LEAST.”

It’s hard for Big East fans, I know, but having spent most of my life in the flyover states of Michigan and Illinois, I can’t help but feel a bit of schadenfreude in the suffering of the Big East in this year’s N.C.A.A. basketball tournament.

The conference has always seemed to get an outsized amount of attention. The Big East, after all, is awfully big (it has 16 teams), and it’s in the East, which means that it receives a lot of coverage. The search term Big East basketball returns more than twice as many press hits in Google News as the same search for Pac 10 basketball. The league also gets 50 percent more media coverage than the Big Ten.

Heading into the tournament, the conference had for once seemed to live up to its Broadway billing. During the regular season, its 16 teams (counting also-rans like DePaul and Rutgers) went 34-19 against N.C.A.A. tournament entrants from outside the conference. This compares favorably, for instance, to the Atlantic Coast Conference, whose teams went 19-29 against tournament competition.

But the Big East, which began with a record 11 representatives into this year’s N.C.A.A. field, has now had its ranks depleted to two. There’s Marquette, which has survived as a No. 11 seed. And there’s Connecticut, which has played very good basketball but now faces difficult tests against San Diego State (in a de facto road game in Anaheim) and Duke (whose star point guard Kyrie Irving has returned from injury).

Its other nine teams have been eliminated, however, and several of them (like Notre Dame) went out as favorites. Overall, the higher-seeded team is 36-12 in this year’s tournament. If you break those results down by conference, however, you’ll find that Big East teams are only 7-6 as the higher seed. (The rest of the field is 29-6.)

A more sophisticated take on favorites and underdogs does not provide any immediate vindication for the conference. Before each tournament game, we’ve issued a forecast of the likelihood of each team winning. The seeds of each team receive only a small bit of weight in the formula; instead, it is mostly based on factors like computer ratings, injuries and the geographic location of the game.

So far, 6 of the 9 biggest upset victims have been Big East teams:

Are there structural factors that are causing the conference to underachieve this year? Conceivably, for instance, the very fact that competition within the conference was so rigorous might have left its teams tired and worn out.

But John Gasaway, who writes for ESPN.com and Basketball Prospectus, was skeptical of this explanation.

“Definitely not,” he wrote to me in an e-mail. “They already had the 18-game schedule in place in 2009 when they had three No. 1 seeds, got four teams to the Elite Eight, and two to the Final Four.”

If fatigue were a factor, indeed, one might have expected it to have the most impact on Connecticut, which played five teams in five consecutive days to win the Big East tournament. But Connecticut has played very well so far, as has Marquette, which played three games at Madison Square Garden. Instead, Pittsburgh, which played only one conference tournament game, failed to hold up its end of the bargain — as did Notre Dame, which played two.

The conference is also stereotypically big and physical and punishing. But this is mostly a perception left over from the Patrick Ewing era. An average of 35.7 fouls were called in Big East conference games this year, about the same as the 35.9 fouls in games involving the other five major conferences. The average Big East player is 6-foot-5, which also matches the average for the other conferences. Its teams play all different sorts of styles, from undersized and uptempo Louisville to plodding West Virginia.

Instead, the Big East’s struggles in the tournament require a more prosaic explanation.

Second, although the Big East had a lot of depth, it was somewhat lacking in elite teams.

“The Big East was always good, just not the best conference in the nation from top to bottom,” I was told by Ken Pomeroy, the author of the Pomeroy power ratings, one of the systems that our statistical model uses to help make its projections. “They definitely had 11 teams in the nation’s top 50. But maybe just one top 10 team, Pittsburgh. And Pitt was the weakest one-seed by a significant margin.”

Indeed, although the Big East has been the victim of some crushing upsets, its overall performance has been only a little bit worse than what might be expected statistically.

So far in the tournament, the Big East has played a total of 14 games against teams from outside its conference. (This excludes two cases where two Big East teams played each other.) According to the projections that we issued before each game, the Big East should have compiled either 9 or 10 wins in these games. Instead, it won 7. That isn’t great, but it’s roughly equivalent to a 100-win baseball team going 7-7 over a two-week stretch, which would be unremarkable. 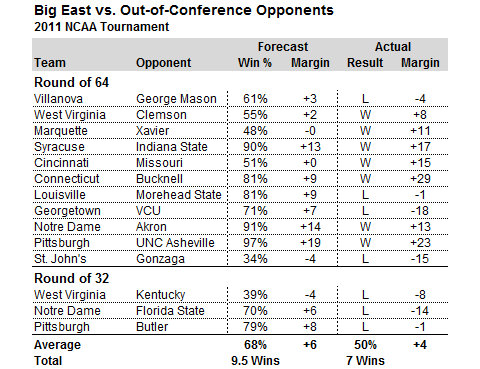 In addition to predicting the winners and losers, our model also projects a margin of victory — a point spread — for each game. In these 14 games, the Big East team was favored by an average of 6 points according to the model. In practice, it won these games by an average of 4 points. That isn’t a very meaningful difference, and Big East teams have compiled an even record against the point spreads implied by our model.

Whether or not the Big East is overrated depends on just who is doing the rating. It might be possible to demonstrate that the conference is overrated in the eyes of the average fan, for instance. According to the hundreds of thousands of brackets filled out in the Yahoo! tournament challenge, the 11 Big East squads were expected to win a total of about 18 tournament games. By contrast, our objective pre-tournament projections had them winning around 15 games.

And one or two of its teams might be overrated. There was a good case to be made, for example, that Notre Dame was likely to underachieve lofty expectations. As well as Connecticut has played lately, people evaluating them solely on the basis of their past seven games — while ignoring their first 30 — could be in for an unpleasant surprise.

By an extremely literal definition, the Big East was overrated in the sense that we now have more information to evaluate the conference and that information isn’t quite as favorable as what we had to go on before. But no league that has won so many games against elite competition deserves to be considered a failure.