With the 2018 midterms (mostly) behind us, focus has shifted to the 2020 presidential election. The Iowa caucuses are usually the start of the presidential nomination process, and as of right now, they’re scheduled for Feb. 3, 2020 — just over 400 days from now. While we’re still more than a year out, two new polls found former Vice President Joe Biden in the lead in the race for the Democratic nomination. At least 30 percent of likely Democratic caucusgoers in Iowa listed him as their top choice for president.

The Des Moines Register/CNN/Mediacom Iowa Poll from Selzer & Co.1 found Biden at 32 percent while a survey from David Binder Research on behalf of Focus on Rural America found Biden at 30 percent.2 In both polls, no other candidate cracked 20 percent. In an even earlier poll Biden led the field with 37 percent listing him as their No. 1 pick.3

Even though we’re still a ways from the caucus, these numbers could be read as a good sign for Biden. In the last four presidential elections where there was no Democratic incumbent running, the Iowa caucus winner went on to become the party’s nominee: Al Gore in 2000, John Kerry in 2004, Barack Obama in 2008 and Hillary Clinton in 2016. Moreover, Biden has never polled this well in Iowa. In both his 1988 and 2008 presidential bids, Biden failed to hit the double-digits, and even when it seemed possible that Biden might run in 2016, his best Iowa marks were in the low 20s against Clinton and Sanders.

But according to FiveThirtyEight’s database of Iowa polls,4 most candidates who polled at roughly 30 percent more than one year before the caucuses have not won the caucuses or the nomination. From 1980 to 2016, eight different candidates hit the 30 percent mark in a survey taken at least one year out. Only three went on to win the Iowa caucuses: Walter Mondale in 1984, Bob Dole in 1988 and Clinton in 2016. Mondale and Clinton later won their party’s nomination, but Dole came up short against George H.W. Bush.

And some candidates polling at 30 percent or more withdrew or didn’t end up running. For instance, Gary Hart was the front-runner for the 1988 Democratic nomination and two surveys more than a year out found him polling in the high 50s, but after Hart got caught in an extramarital affair, he dropped out of the race, eventually re-entered and finished with less than one percent of the caucus vote. About a month after the Supreme Court ruled in Bush v. Gore to decide the 2000 election, a poll looking at the 2004 Iowa caucuses found Gore at 39 percent. Gore decided against another bid in late 2002.

Three others ran but failed to win the Iowa caucuses or their party’s nomination in the 2008 cycle. Clinton and John Edwards each hit the 30 percent mark in at least one poll more than a year out but both lost to Obama in Iowa. Meanwhile, Rudy Giuliani polled at 30 percent once but skipped the caucuses, instead opting for a Florida-first campaign strategy that completely failed.

We are a long way from the Iowa caucuses, and there will be myriad twists and turns and developments, such as debate performances and candidate announcements. Heck, Biden — who will be 77 years old on Election Day 2020 — might not even run, though he sure is acting like a potential candidate. We also know that early-state surveys aren’t very predictive until about two weeks after Thanksgiving in the year prior to the presidential election — or roughly two months before the 2020 Iowa caucuses. So as we speculate about the meaning of presidential polls more than a year out, know that they don’t necessarily tell us much other than which candidates have name recognition — and on that front, Biden seems to be doing just fine. 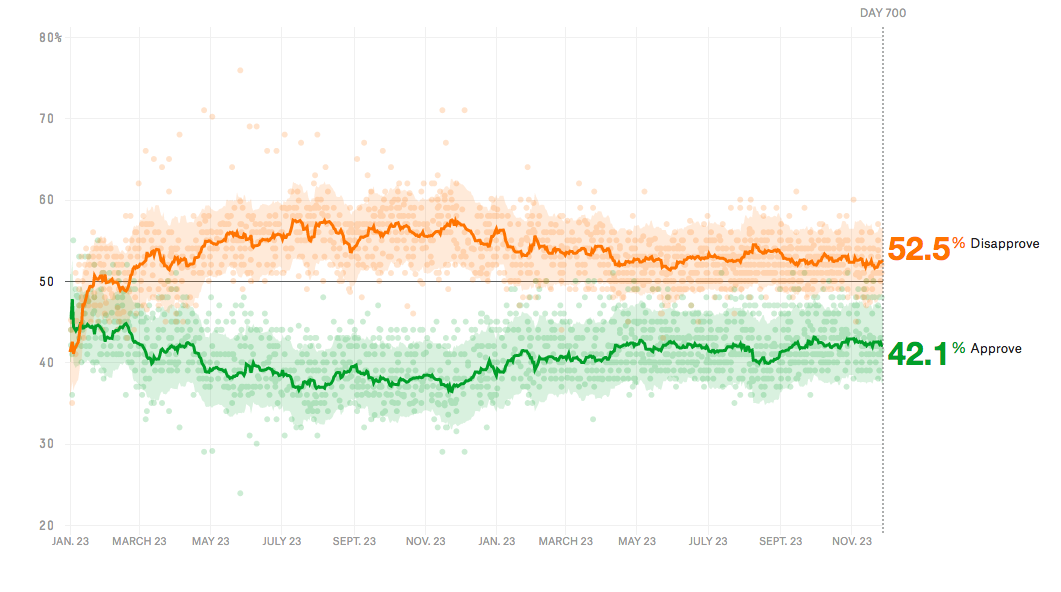 CORRECTION (Dec. 21, 1:45 p.m.): A previous version of this article incorrectly described the 1988 Democratic caucus results in Iowa. Gary Hart dropped out of the race after news broke that he had had an extramarital affair, but he later re-entered the campaign.