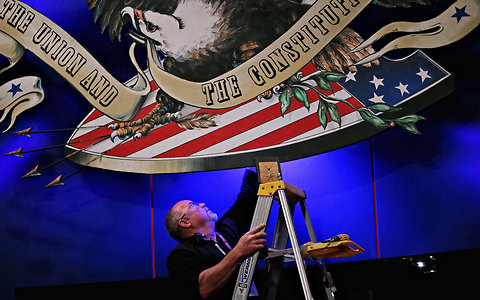 Chip Somodevilla/Getty Images Preparing the stage on Wednesday at Centre College in Danville, Ky., for the vice-presidential debate.

When Vice President Joseph R. Biden Jr. takes the debate stage in Danville, Ky., on Thursday night, he will probably not be able to erase all of Mitt Romney’s gains in the polls after his debate performance in Denver last week, gains that appear to have flattened President Obama’s postconvention bounce.

For the first time since Aug. 28, the FiveThirtyEight model projects Mr. Obama to win fewer than 300 electoral votes. But Mr. Biden may be able to do something about the yawning gap in enthusiasm between Democratic and Republican voters. That gap might be the greatest threat to Mr. Obama’s winning another term in the White House, and it seems to have widened since the Denver debate.

Republicans normally turn out at higher rates than Democrats, in part because they tend to be older, whiter and have other characteristics that correlate with voting on a regular basis. But the enthusiasm gap is usually small in presidential election years, when about 75 percent of registered voters turn out. In the presidential elections since 1992, polls of so-called likely voters have typically been one or two points more Republican-leaning than those of registered voters. (The polls of likely voters have also been slightly more accurate predictors of the actual Election Day result.)

This year, the gap has been wider than usual. Across a variety of polls, it averaged about three points in favor of Mr. Romney before the parties’ conventions. It appeared to tighten slightly, to more like two percentage points, just after those gatherings. But since the Denver debate, some polling firms have shown an especially large split between registered and likely voters.

Gallup, which began publishing likely voter polls on Tuesday, found the split to be five points in Mr. Romney’s favor. That was enough to put him ahead by two points among likely voters in the Tuesday poll — even though he trailed Mr. Obama by three points among registered voters.

Pew Research, which previously had shown very little difference between registered and likely voters, found a four-point difference in their postdebate poll — enough to account for all of the lead they found for Mr. Romney.

If all registered voters turned out (much less the broader population of all adults who are eligible), Mr. Obama would be a clear favorite. But some of them will not show up at the polls, and the difference could easily be large enough to allow Mr. Romney to win.

It is probably too late for Mr. Biden and Mr. Obama to do anything about the high level of Republican enthusiasm. Since the Denver debate, Republicans are feeling better about Mr. Romney’s candidacy — and they were already fired up about the opportunity to oust Mr. Obama.

But Mr. Obama and Mr. Biden may be able to return bedrock Democrats to the fold. Although some of the Democratic advantage in registered voters comes from groups like Hispanics and young voters who are always difficult to get to the polls, Mr. Obama’s debate performance may also have turned off other types of Democrats who can usually be counted upon.

In particular, according to research by the Democratic pollster Stan Greenberg, Mr. Obama’s performance was viewed poorly by unmarried women, who wanted a more combative tone and a sharper critique of Mr. Romney’s views about the middle class. Unmarried women were a crucial constituency for Mr. Obama in 2008, voting for him, 70 to 29 percent, over John McCain.

The excitable Mr. Biden should have no trouble maintaining a fiery demeanor — as he did in his convention speech in Charlotte, N.C., where he gave an effective defense of Mr. Obama’s record. Mr. Biden may also have relatively little to lose by being a cheerleader for Mr. Obama, even if that is not the most appealing strategy for undecided voters, most of whom disapprove of Mr. Obama’s performance.

Political science research is divided on the impact of presidential debates — the one in Denver clearly seemed to matter quite a bit — but there is even less evidence that vice-presidential debates can sway voters. Even the famous 1988 debate between Senators Lloyd Bentsen and Dan Quayle produced little obvious shift in the polls toward Mr. Bentsen, the perceived winner, and his running mate, Gov. Michael S. Dukakis.

The enthusiasm gap may be a different matter. In general, it is easier to persuade voters to turn out than to compel them to change their minds.

It seems plausible that roughly half of Mr. Romney’s postdebate bounce — which appears to in the range of three to four points on average in the polls — has resulted from the shift in enthusiasm. It will be Mr. Biden’s job in Danville to work on that half of the problem. Then Mr. Obama will need to improve his performance in the last two debates to get back the rest of what he lost in Denver.

A version of this article appears in print on 10/11/2012, on page A12 of the NewYork edition with the headline: Biden’s Debate Mission: Whip Up Democrats to Blunt Romney’s Gains.