Parents might want to start carrying a list of concussion symptoms in their strollers. From 2008 to 2013, playgrounds sent increasing numbers of children to emergency departments with traumatic brain injuries, including concussions, according to a study by the Centers for Disease Control and Prevention published Monday in the journal Pediatrics. The study focused on children age 14 or younger who came to an emergency department in the U.S. from 2001 to 2013. 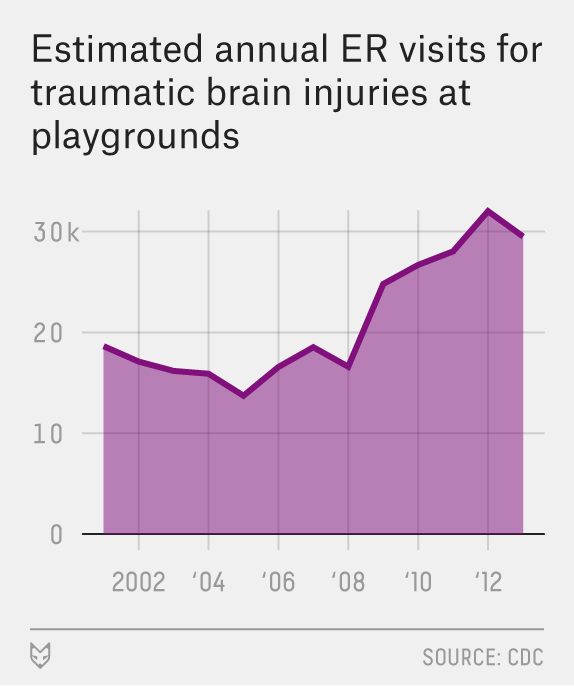 The CDC isn’t sure what’s causing the rise. The report in Pediatrics says it could be that kids are playing more often or that playgrounds aren’t being repaired or maintained often enough. But it’s also possible that the rise in children being diagnosed with traumatic brain injuries is the result of parents, teachers and doctors’ increased awareness of the condition. Maybe in these days of reports about concussions in professional sports, a kid bumps her head, sees stars and gets taken to the doctor instead of running back to play.

For the most part, the concussions and brain injuries that sent children to the ER weren’t severe. Ninety-six percent of children with playground traumatic brain injury went home after being diagnosed, no hospitalization or further treatment required. (Although the parents may have prevented further, more significant harm by helping make sure their children avoided a second injury while recovering from the first.)

The biggest takeaway for me from the study: My parents were probably right when they told me not to jump off the top of the monkey bars or have a competition to see who could launch themselves the farthest off the swings. Those two pieces of equipment were the places children suffered traumatic brain injury most often. Slides were just behind — going down headfirst might make you the toast of the 8-year-old set, but a bad landing can be serious.

Concussions are serious, but they’re a small share of all the injuries that happen on playgrounds. According to a different data set, from the Consumer Product Safety Commission, fractures represented 40 percent of all injuries to children age 14 and younger at playgrounds in 2015.1 Concussions accounted for 3 percent to 13 percent. Only 3 percent of injuries were specifically coded as concussions, but 9.5 percent were internal organ injuries that affected the head, some of which were very likely to be traumatic brain injuries.

Note that lacerations (cuts) and contusions (bruises) are also on the list of most common injuries. Parents, make sure you’re still carrying bandages and kisses.

CORRECTION (May 5, 4 p.m.): A table in an earlier version of this article misstated the estimated annual average tally of traumatic brain injuries on playground equipment. The table shows all recorded injuries, not injuries per 100,000 children.