Last week, Anthony Hinton became the 152nd death-row prisoner to be exonerated since 1973. Hinton had been convicted of the murder of two restaurant workers, but the case against him fell apart after the U.S. Supreme Court held in Hinton v. Alabama that his lawyer’s mistakes deprived him of a fair trial and Hinton was entitled to a new one. Rather than try him again, the state dropped the charges and set him free.

Hinton spent nearly 30 years on death row, which is more than most exonerated inmates (the median time under sentence of death is 10 years), but his path to freedom is illustrative: Like most people who’ve been exonerated to date, Hinton didn’t rely on new DNA evidence to prove him innocent. His case didn’t depend on scientists discovering how to amplify trace evidence, revising our understandings of arson, or making any other advance in forensics that shed new light on the evidence against him.

In other words, there was no reason for him to wait that long for justice.

According to the Death Penalty Information Center, only 20 of the 152 death-row exonerations since 1973 have been due to DNA evidence. The low proportion of DNA-based exculpations is due partially to prisoners’ limited post-conviction access to DNA testing. 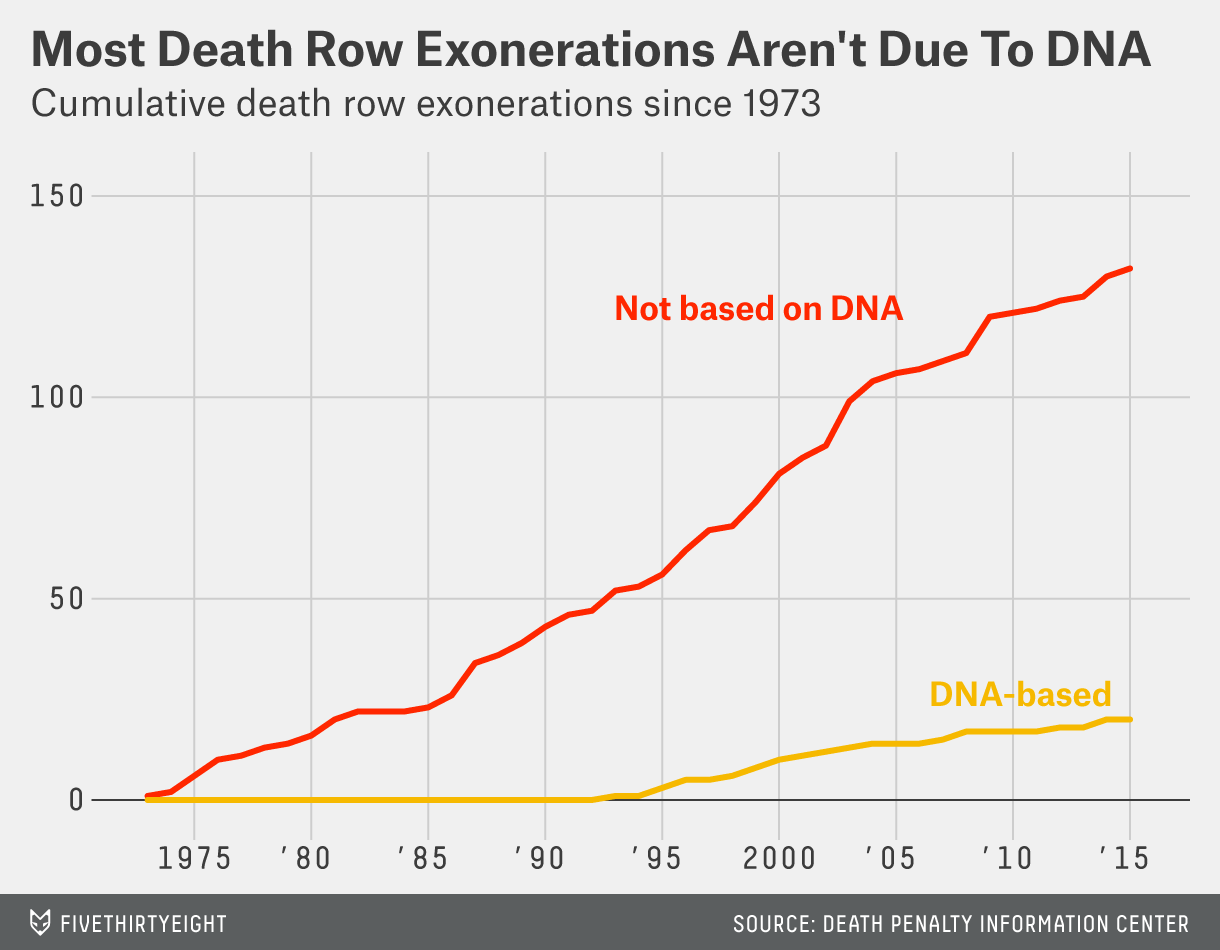 In Hinton’s case, his lawyer simply believed that he couldn’t afford to hire a competent expert to question the ballistics report that linked a gun in Hinton’s possession to the bullets found at the crime scenes. The lawyer mistakenly thought that expert witness fees were capped at $1,000, so he hired a one-eyed civil engineer, who even Hinton’s attorney categorized as “inadequate.”

Once Hinton had competent experts on his side, they raised serious doubts about the credibility of the ballistics evidence, which was the only forensic evidence tying him to the two shootings.

Hinton’s case and the historical data suggest that the problems that cause wrongful convictions won’t be solved simply by having better forensics available at trial and on appeal. Hinton and many of the others exonerated without reference to DNA weren’t condemned through a lack of exculpatory evidence, but by prosecutors and juries giving too much weight to the evidence available.

Robert Dunham, the executive director of the Death Penalty Information Center, said he expects to see more cases like Hinton’s, which hinge on misconduct, bias or ineffective lawyering rather than progress in forensics. “Advances in science will certainly disclose more innocent people sentenced to death,” Dunham said, “but advances in science won’t come close to identifying all the innocent people currently on death row.”

According to the Bureau of Justice Statistics, 83 people were sentenced to death in 2013. Making sure that none of those prisoners or any yet to be sentenced turn out to be another Anthony Hinton will require advances in the administration of our courts, not just in our laboratories.