On Friday, the BLS reported the latest job figures. As I will explain, this was a good report overall. Both the household and establishment survey printed some good, solid numbers. Put another way, it’s pretty obvious the recession is over.

Nonfarm payroll employment increased by 162,000 in March, and the unemployment rate held at 9.7 percent, the U.S. Bureau of Labor Statistics reported today. Temporary help services and health care continued to add jobs over the month.

Employment in federal government also rose, reflecting the hiring of temporary workers for Census 2010. Employment continued to decline in financial activities and in information.

Remember there are two surveys — the household and the establishment. The household provides information for the unemployment rate. So, let’s start there. 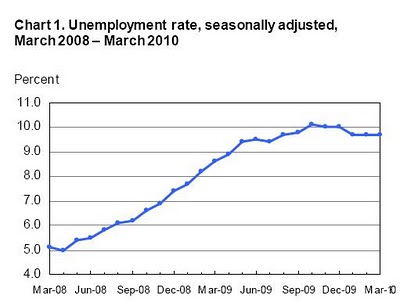 It appears the unemployment rate has topped out in the 9.5%-10% range. While we’re not seeing any downward momentum, we aren’t seeing anymore strong upside moves either.

Less than a high school diploma: 14.5%
High school with no college: 10.8%
Some college or associates degree: 8.2%
Bachelor’s or higher: 4.9% (this is near full employment from an economic perspective).

The civilian labor force increased by 398,000. This led to an increase in the participation rate (the percentage of the population that is part of the labor force) of .1%, from 64.8 to 64.9. In addition, this number is the denominator in the unemployment calculation. Last month we also saw an increase of 134,000 in overall unemployment. That means the unemployment rate remained stable at 9.7%.

In addition, according to the household survey, the number of people employed increased by 264,000. This led to an increase in the employment to population ratio of .1%, from 58.5% to 58.6%.

Unemployment numbers are presented in a time-based orientation. That means we look to see how long people have been unemployed. It begins with initial unemployment claims and then moves out to the number of weeks people are unemployed. With the exception of the 27 weeks and longer series, all these numbers are showing improvement. 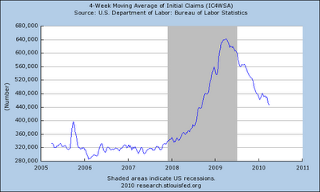 The 4-week moving average of initial unemployment claims continues to move lower. This indicates that the number of people entering the ranks of the unemployed continues to drop. 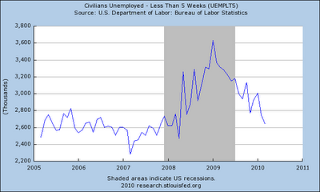 The number of people unemployed for less than 5 weeks continues to drop. In addition, this number is approaching more “normal” levels. 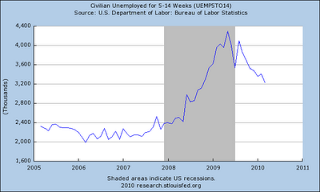 The number of people unemployed for 5-14 weeks is also dropping. However this number is still very high and will require a fair amount of time to get back to a “normal” level. 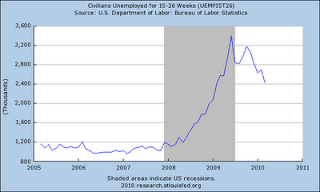 The number of people unemployed for 15-26 weeks is also dropping. However this number is still very high and will require a fair amount of time to get back to a “normal” level. 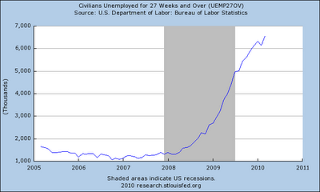 Let’s move onto the establishment survey by beginning with this chart of job losses and gains: 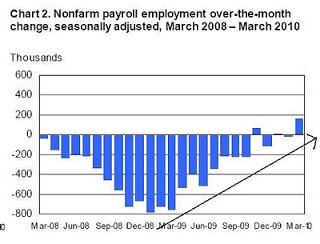 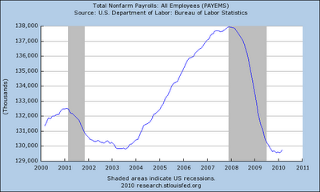 I raise these two facts for the following reason. While there is understandable frustration with the current high rate of unemployment, it’s important to remember the severity of the damage caused by the recession to the overall employment situation. To use a medical metaphor, a person who had quadrupole bypass on Monday will not be running a marathon on Friday. An economy that lost all of the jobs created in the previous expansion will not turn around and start adding 300,000 jobs/month anytime soon.

The establishment survey was solid. First, total private hiring was 123,000 — meaning the “census workers tilted the numbers” argument is wrong. Secondly, goods producing jobs increased 41,000. This sector of the economy has been a drag on growth for the last few months. In addition, construction and manufacturing jobs account for the vast majority (over 70%) of all job losses during the recession. So an increase in this area of the jobs market is welcome.

In addition, both January and February job totals were revised higher:

Overall, this is a solid report.