If your raison d’être is being popular, peak happiness could occur at age 29. At least that’s according to a recent poll that a lot of people are talking about. The survey found that 29-year-olds average a total of 80 friends and that the average person has just 64.

Even setting aside whether my countrymen are particularly affable (the 1,505 respondents were British), I’m very skeptical. The survey was commissioned by Genius Gluten Free and found that most friends were made in the workplace — a convenient finding for the food company, which wants “to encourage friendlier lunches with colleagues” in its new cafes.

If you’re not 29 and still feeling worried, you should know that other surveys have reached different “best age to be” conclusions. We’ve rounded up a few — the rigorous and the not so rigorous — below.

Before you’re 25: If you’re interested in facts, disregard this paragraph because it comes from The Onion and cites a no-doubt fictitious study. The website reported that a “study on retirees found that most people make their most important or life-changing memories before age 25.” To add a touch of vox populus, they quote “Mikaela Lewis,” who says, “I’m purposely holding off loving people so I have something to look forward to.”

28 (for women): This survey, commissioned by the hair-color brand Clairol Perfect 10, asked 4,000 women about their happiness in 12 different areas. The poll found that at age 28, women are happiest with their sex lives; at 29, they’re happiest in their career; and by 30, they’re most content with their relationships.

37: Deodorant manufacturers who spoke to 2,000 people in Britain concluded that 37 was the age of contentment. Why? Because it was the average age people hoped to have achieved their life goals. That’s about as scientifically accurate as looking at the aspirations of thousands of fiancés and concluding that they’ll have a happy marriage.

70+: Last month, Gallup released an analysis of the responses of 85,145 U.S. adults. Asked how they felt about their physical appearance, those 70 and older were the most likely to give positive responses. And, just like the paper below, Gallup found people felt lowest in their 50s. 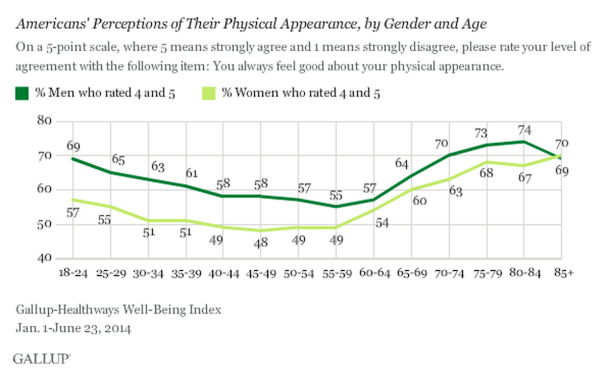 23 and 69: In July 2013, the Center for Economic Performance at the London School of Economics used data from 23,161 Germans about their life satisfaction and found that it peaked twice, around age 23 and again around 69. In fact, the U-shape appears in so many measures of well-being that it’s an established part of behavioral and social science theory. 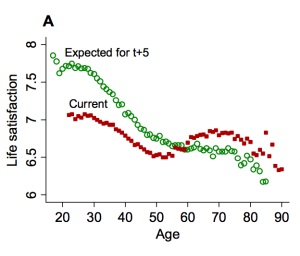 According to the researchers at the school who wanted to test the theory, it’s a pattern that has been observed in more than 50 nations and across socioeconomic groups. Expectations are also interesting, though: Young adults tend to overestimate their future life satisfaction, but from 30 onward they readjust their expectations downward. By 55, respondents hit full-on pessimism about their future satisfaction and tend to estimate things will be worse than they will be.

82-85: Wanting to measure psychological well-being, a team from Stony Brook University used polling data from 340,847 Americans. Respondents were asked to “imagine a ladder with steps numbered from 0 at the bottom to 10 at the top. The top of the ladder represents the best possible life for you, and the bottom of the ladder represents the worst possible life for you. On which step of the ladder would you say you personally feel you stand at this time?” Although the researchers observed a similar U-shape on their “well-being ladder,” when they probed at a finer level of detail they found that “stress and anger steeply declined from the early 20s, worry was elevated through middle age and then declined, and sadness was essentially flat.”