Many governments experience a dwindling of popular support over the course of their administrations, particularly those who initially command much broader personal support than their policies or electoral margins would suggest.

Yet, most do not get whacked in the face with a minature church.

As succinctly put by BBC News:

” Prime Minister Silvio Berlusconi of Italy is recovering in hospital after an assault left his face covered in blood following a rally in Milan.
He suffered two broken teeth, a minor nose fracture and cuts to his lip after being struck by a man wielding a souvenir model of the city’s cathedral. “

The most recent events mark an interesting point in the life and political career of the 73-year-old multi-billionaire, who has consistently made headlines regarding personal shenanigans much more often than policy decisions. In the last year, his wife has filed for divorce after a highly public feud, he brought controversy by joking about Barack Obama’s “suntan,” audio tapes of him having sexual relations with a paid escort were made public and he argued that sexual assault in Italy was difficult to stop because Italian women are just “so beautiful.”

At the same time, Berlusconi’s personal approval ratings have fallen from a high of around 63 percent to a recent figure of just 50.1 percent, even though he receives generally favorable treatment in the Italian press*.

He owns the largest commercial broadcasting company in Italy, Mediaset, the largest magazine and book publishing company, as well as soccer powerhouse A.C. Milan. His stranglehold on Italy media and links to the mafia led The Economist to publish a blazing April 2001 feature article which on the cover read “Why Silvio Berlusconi is unfit to lead Italy.” Berlusconi proceeded to sue the magazine for defamation, a charge which was dismissed by the Italian courts (along with assessing cost-recovery for the UK-based weekly) in 2008.

Despite consistent public embarrassment, charges of corruption or links to the Mafia every five years or so, clear conflicts of interest between his own fortune and holdings and the Italian political sphere, and a divided country over which he is Prime Minister, Berlusconi has managed to survive and thrive in the power politics of the Italy for nearly twenty years.

Entering his first election in 1994 at the helm of the “Forza Italia,” a party he founded the year before, Berlusconi launched a huge television advertisement campaign on Mediaset’s three major television stations. At the same time, he allied Forza Italia with his wealthy power base in Milan, represented by the Northern League (Lega Nord), while at the same time allying with the very conservative and southern-focused National Alliance (Alleanza Nazionale), leading the coalition to a sweeping victory with 366 deputies, against the opposition “Alliance of Progressives” who won just 213 seats.

This was actually no small feat. For generations, and quite evidently since World War II, Italy has been politically and economically divided in a generally north-south fashion. A good starting place to frame the modern situation is the 1946 referendum, the first after the destruction of WWII, which asked the Italian popular to decide between becoming a parliamentary Republic or for the monarchy to continue in power.

The geographic division of the vote was remarkable. 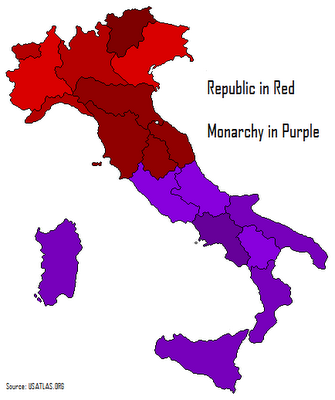 Showing the major fractures in a united Italy, voting patterns in 1946 reflected the dominant split in the country, with more socially conservative and poorer populations in the south, as well as the wealthy connected to the monarchy in Rome, voting for the King (in purple). The red segments of the Industrial north (which drove much of the “il boom” of the 1950s and 60s) were interested in a republican way forward, including a return to the European fold.

Returning to 1994, the year of Berlusconi’s first victory, a similar pattern of income distribution remained, but this time with a different political outcome. 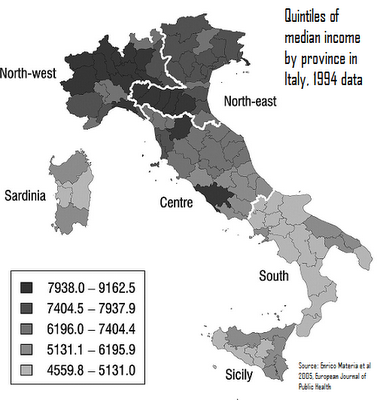 Much as it was 50 years before, economic power in Italy in the 1990s was centered in the northern provinces and around Rome.

However, the 1994 Berlusconi coalition cut across these historical barriers and built a solid vote total among both the wealthiest and the working poor (not the poorest quintile, but just above, in the 20 percent to 40 percent of the median group). Social conservatives were targeted as well, with Berlusconi advertising a traditional center-right platform. 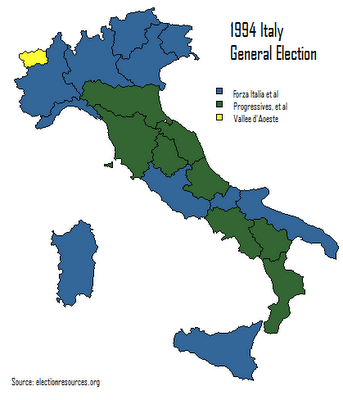 The 1994 coalition fell apart just one year later, when corruption investigations in Milan into Berlusconi’s activities and accusations of broken promises from some coalition partners forced the PM to resign.

In the 1996 election, Berlusconi’s attempted comeback was blunted by his trying to go it with just his most conservative allies — leaving the Lega Nord to run independently and denying him major support outside of Sicily, Puglia, and just two of the wealthy northern provinces, who were split between the Lega Nord, Olive Tree coalition and Alliance for Freedom. 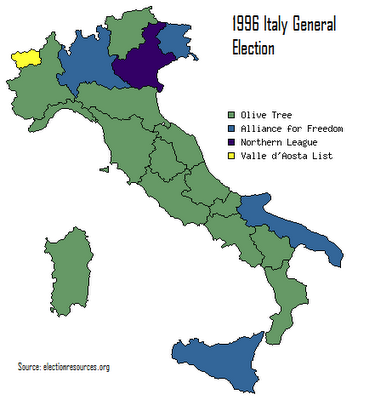 After five years in the wilderness, Berlusconi was able to rustle up the 1994 coalition again, this time for the 2001 general election. It was 1994 all over again in more ways than one, with Berlusconi’s new party the “House of Freedoms” running on the platform of a “Contract with the Italians.”

The winning map provided no real suprises, with a mixture of the weathy north and the middle poor south coming together in support of the House of Freedoms: 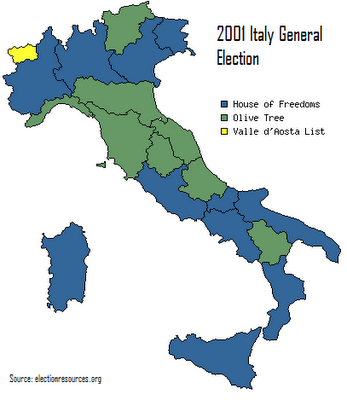 The “inter-regio” of 2006-2008, when an unpopular Berlusconi was narrowly edged by the Democrats-led “Union” coalition led by Romano Prodi, was much like the late 1990s, when a backlash against Berlusconi’s outlandish ways knocked him out of power for several years.

But the Survivor prevailed again in 2008, basically driving the same storyline that has fueled him all along. “Out of love for Italy, I felt I had to save it from the left,” he has repeatedly said, mixing his image of a brash, colorful and somehow “regular” Italian, while playing also the role of the caretaker and friend.

With a flair for the dramatic, he declared earlier this year in front of Italy’s constitutional court:

“I am without doubt the person who’s been the most persecuted in the entire history of the world and the history of man.”

And victim he was on Sunday, with the miniature Milanese Duomo bloodying his face not unlike a short but poignant street fight. Indeed, the Italian Minister of Interior declared that the Prime Minister was “at risk of being seriously injured, or killed.”

But survive he did indeed, as his has for two decades. Knocked down and laughed at for his clownish and conservative ways, yet back again, with power, influence and money firmly gripped in his hand.
—
Renard Sexton is FiveThirtyEight’s international columnist and is based in Geneva, Switzerland. He can be contacted at sexton538@gmail.com

* Press freedom in Italy ranks far below other EU states, in part because of the power the current PM has over broadcasting.