Tom had our preview of the PA-12 special election yesterday, but just a quick statistical accompaniment to that.

Here is a chart showing the Democatic share of the two-way vote (that is, excluding third parties) in all open seat (non-incumbent) House races in the 2006 and 2008 cycles. As you can see, the trend is generally fairly linear with respect to PVI: 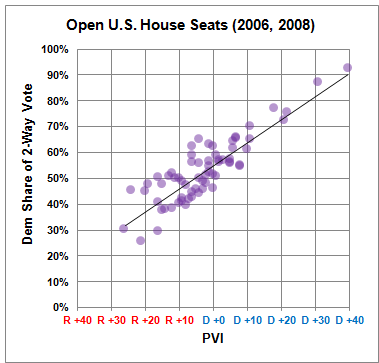 In a district like PA-12, which has Partisan Voting Index of R+1, we’d have expected the Democrat to win by a margin of about 54-46 if conditions were the same as in 2006 and 2008. These, of course, were very good cycles for Democrats.

Here is the same information for 2004, which was a good cycle for Republicans. 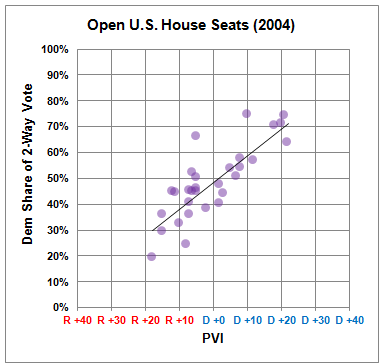 Now, this doesn’t really tell us very much. As you can see from the graphs, there’s quite a lot of variance around the regression lines, even if the overall trend is fairy linear. That is to say, the contingencies of individual candidates and districts matter a lot — and this is especially so in special elections.

Of course, most people expect this November’s election to wind up somewhere in between 2004 and 2006/08. And most people expect tonight’s race in PA-12 to feature a very close outcome. The only point I’d emphasize is that, from a forecasting standpoint, a Crtiz win by 50.1-49.9 is essentially no different than a Burns win by the same margin. Even under 2006/08 conditions, a Democrat would have about a 30 percent chance of losing this seat, and even under 2004 conditions, he’d still have about a 40 percent chance of winning it. It’s really only if one of the candidates wins by middle-to-high single digits (or more) that it might tell us something, and then not necessarily very much.