Earlier this year, I attended a high level meeting among international organizations in Geneva regarding state-building and peacebuilding in the tough, entrenched conflicts around the world. After spending nearly three hours discussing experiences and lessons from Afghanistan, (D.R.) Congo, Sierra Leone, Burundi, Sudan, Zimbabwe and others, a long-time researcher on peace and conflict raised his placard to make a final observation.

“While we sit here in Europe, looking for answers to failing states, perhaps we should look closer to home,” he suggested. “After all, as it was put by the German media several years ago, Belgium is the most successful ‘failed state’ of all time.”

In April of this year the embattled government of Belgium received its final blow — a key member of the governing coalition of five parties, the Flemish center-right “Open VLD,” left the government over a long-standing political language debate. In short, the issue revolves around whether to split the now multi-lingual electoral constituency of Brussels-Halle-Vilvoorde, the details and vagaries of which would defy even experienced negotiators of the Palestine/Israel mess.

The fall of Prime Minister Yves Leterme’s second government, which had only been around for five months, ended a period of turmoil since the 2007 where the Belgians had seen no less than four governments, under three Prime Ministers, following a period of six months of no government at all from June to December 2007.

The maddening process of stitching together a viable government after the 2007 general election illustrates many of the fundamental fault-lines in Belgian society and politics. 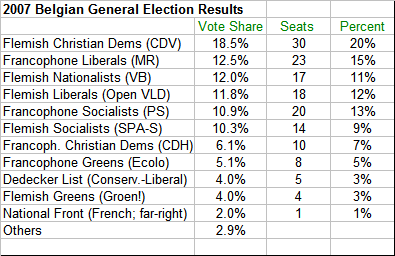 No single party received more than 20 percent of the seats in the Parliament, while even among the two language communities there were major ideological differences among the parties.

That said, in most continental European countries, there is a natural center-right coalition to be made between Christian Democrats and Liberal parties — as has been seen in Germany, and with some strong similarities to the French UMP and the British Conservative-Lib Dem governments. In the Belgium 2007 case, an ideological government could have been patched together from the two Christian Democratic parties (together worth 40 seats) and the two Liberal parties (41 seats), for a combined 81 Members of Parliament.

Instead, Belgium launched into a ten month period of upheaval where rounds and rounds of negotiation and attempted formation led the King of Belgium, Albert II, to request an interim government led by the outgoing Prime Minister Guy Verhofstadt to govern until a coalition could be formed.

Belgium (among other Parliamentary states) even has specific names for the individuals who try to negotiate a governing coalition. The formateur is requested by the King to try to form a government — a role that also exists in Dutch and Israeli politics — ostensibly with the chance to become Prime Minister. When it looks like negotiations might be rough, this person can be preceded by an informateur, who lays the groundwork for an agreement.

In Belgium, however, things got so entrenched that they had to add an additional layer: the explorator, who would act as royal mediator ahead of the informateur and formateur.

One would expect that this falls quite hard on the Belgian population. Without a stable government to make decisions, and questions still pending as to whether constitutional change may someday partition the country, politics has become somewhat of a farce.

A close Belgian friend of mine explained to me in this way: “When the government falls, it is part of the Belgian humor. Of course the people are upset, but they say ‘This is Belgium; it’s another Belgian joke.”

Belgian culture has grown to encompass many elements of the contradiction, as should be expected from a country that was established in the wake of the end of the Napoleonic Wars as an independent, Catholic state that aimed to avoid both French and Dutch imperial control. While today the Francophone community tends to look to France for cultural connection and the Flemish to the Dutch north, the binding elements of dry, dark, absurdist humor and excellent beer have managed keep things relatively together.

This coming Sunday, when the Belgians go to the polls, the Flemish and the Walloons will elect their representatives from separate lists from separate parties, to send to a separate capital: the legal island of Brussels. Often called the ‘capital of Europe’, Brussels has both a cosmopolitan flair and the doldrums of a government town.

The Belgian voters — and there are many of them; in 2007, there was 91 percent turnout — will vote in 11 electoral arrondissements, five from the Flemish region, five from the Francophone region, and one from the multi-lingual Brussels region (the contentious Brussels-Halle-Vilvoorde electoral district). 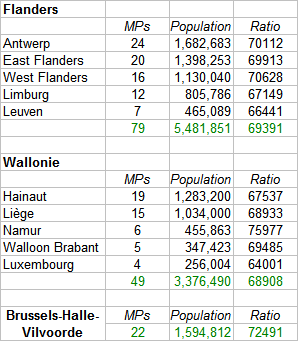 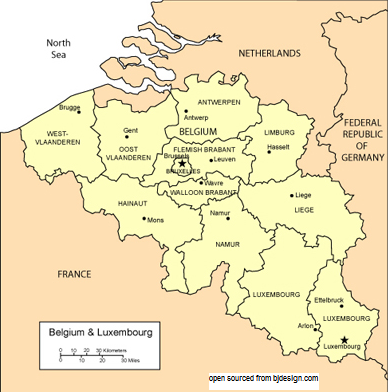 This time, the center-right in Belgium is likely to do fairly well. In Flanders, the insurgent NVA (Flemish center-right, independent-ist) is running on its own, as opposed to being grouped with the Christian Democrats, as they were in 2007. Between the NVA and the traditional secessionist VB (Vlaams Belang), polls are showing about 35 percent of the Flemish vote for independence camp (though NVA is centrists and VB pretty far right), which depending on its distribution could mean between 30 and 35 MPs (20 to 23 percent).

In Francophone Wallonia, it is the left that is ascendant, with the Socialist party leading the polls with over 30 percent, followed by the Liberals with around 20 percent, and the lefty Greens with between 17 and 20 percent. If distributed proportionally (not by district), this would result in about 15, 10 and 8 MPs respectively. Polling in Brussels, where the municipalities indicate the 22 seats are broken into 13 French language area MPs and 9 Flemish language area representatives, has not been done separately — often bleeding into the polling of the Flanders and Wallonia voters. Brussels city voters tend to be more to left, while suburban and exurban voters to the liberal center-right.

Projecting the vote shares, or the ensuring government, would be nearly impossible, based on minimal polling data, and cross-cutting ideological and identity politics at play. Perhaps a more pragmatic approach would be to instead to guess how long it will take to form the next government, and how long it might last. Three months? A year?

“Why bother?” my friend retorts before pausing. “I don’t really know anything about Belgian politics. I’m from Brussels. “