Yesterday, the Belgian public went to the polls to elect a new Parliament, required by law to do so. Overall, turnout was a tick down from 91 percent in 2007 to 89.2 percent this time around as a polarized electorate gave no single party more than 17.4 percent of the national vote (preview post from last week here).

However, in a dramatic finish, the Flemish party NVA, who in 2007 competed in a joint list with the Flemish Christian Democrats, roared to the front of the pack with 17.4 percent nationally, and 27 parliamentary seats, just one more than the Walloon Socialist Party (PS), who earned 38 percent of the Francophone vote and 13.7 percent overall.

This “victory” for the NVA (Nieuw-Vlaamse Alliantie or New Flemish Alliance) is quite remarkable for Belgian politics, as never before has a nationalist party emerged as the largest party in the Parliament. And unlike the far-right nationalist party Vlaams Belang (VB), the NVA is a quite mainstream center-right party by all European political standards (besides its push for Flemish independence). 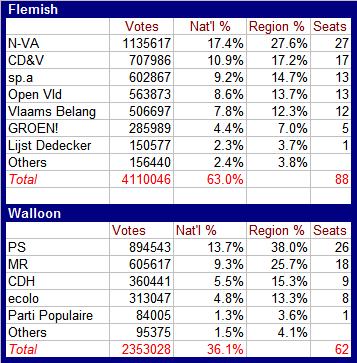 I spoke Friday with a former advisor to the Flemish government who now works for the UN in Geneva. Previously a supporter of the Christian Democrats but now voting NVA, he predicted a big win for his new party. “People in Flanders are just fed up with the deadlock,” he explained. “Enough is enough, and a confederal arrangement that ‘responsible-izes’ each community is the only way forward for Belgium.”

Many in the international media have characterized the societal and political tension in Belgium as largely language-based, with each linguistic group essentially fighting for cultural — and by extension, political — supremacy. Indeed, both groups have attempted to don the mantle of the culturally oppressed. The francophone community, who make up about 40 percent of the population, often imply that the Flemish are pushing a tyrannical majoritarian agenda, while the Flemish harken back to the hegemony of the French language among the ruling elites from the country’s founding until post-World War II constitutional reforms.

In truth, the political problems, while bound up into challenges of identity and culture, also have an extremely important economic component. To put it simply, Flanders is one of the wealthier regions of Europe, with a largely high-value export-oriented economy (examples being the famous Antwerp diamond industry and its port, the second largest in Europe), while Wallonia, whose rich coal and iron mines once brought wealth, has suffered from rust-belt syndrome since WWII, bringing lower incomes and higher unemployment (the steel industry in particular suffering). 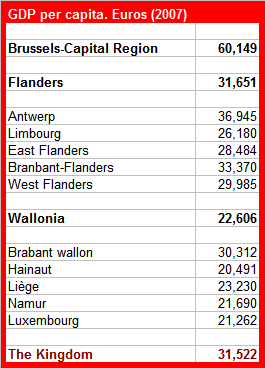 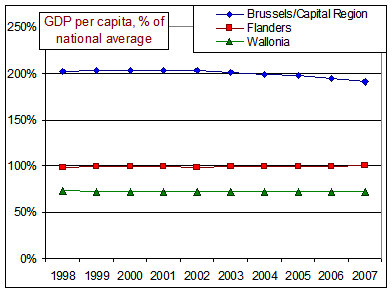 Because Belgium’s fairly generous social security system, which includes public health benefits, public pension scheme, unemployment benefits and so forth, is funded and administered at the Federal, rather than regional, level, a great deal of the costs of the system are bourne by Flemish tax-payers, while a bigger chunk of the benefits go to Walloons.

So, it is class warfare, then, not language? Well, not quite.

The leader of the NVA, Bart De Wever, sees his best chance at forming a workable government in the combined strength of the Parti Socialiste (PS) and their Flemish counterparts, the Socialistische Partij (sp.a), who earned 13 seats. While in many ways diametrically opposed ideologically with the anti-redistributionist rhetoric of the NVA, the PS, may take their chance to have the first Walloon Prime Minister in quite some time.

Led by Elio di Lupo, the (Walloon) Socialists certainly see this as an opportunity to strengthen their position vis-à-vis the Francophone-liberal MR (Mouvement Réformateur) party, who bested them in the 2007 election. Partnering with the devolution-bent NVA in an effort to solidify their position within Wallonia, even if it requires some compromise on constitutional issues, might make sense.

Among almost all parties involved, of course, there is recognition that the status quo is not a sustainable choice. Especially given the growing strength of the devolution-confederation-independence movement in Flanders, the looming sovereign debt crisis in the eurozone and Brussels’ ever-increasing profile within Europe, dislodging the deadlocked federal political situation will need some serious concessions from all sides.

While both sides have promised their constituencies that there are certain points upon which they will not budge (for example, the ‘illegal’ automatic distribution of francophone voting information in a Brussels suburb in Flanders; or the splitting of Brussels-Halle-Vilvoorde), like it or not, this next government must make the hard choices.