In December, I prepared a post entitled 2009’s Most Valuable Democrats, which evaluated Democratic members of the House in terms of the number of progressive votes they cast on key issues relative to a typical Representative from their district. One of the key takeaways was moderate, Blue Dog Democrats, while sometimes being among the party’s least valuable members when they hail from fairly blue districts, can also be exceptionally valuable to the party if they come from more conservative districts but vote with their party on key issues.

We did not apply the Most Valuable Democrat analysis to the Senate. But Evan Bayh, rest assured, would not have been a finalist for the award. Of the 59 Senate Democrats in the current Congress, he was the 2nd most conservative after Ben Nelson, according to the DW-NOMINATE database. Nevertheless, because he comes from a fairly red state, Bayh was reasonably valuable to his party, ranking about in the middle of the pack among all Democratic Senators based on his roll call votes.

The following chart details the DW-NOMINATE scores for each current Senator, which run from -1.0 for extremely liberal to +1.0 for extremely conservative. This is compared against the Partisan Voting Index in each district based on the results of the 2004 and 2008 Presidential elections. Bayh is indicated by the yellow diamond. 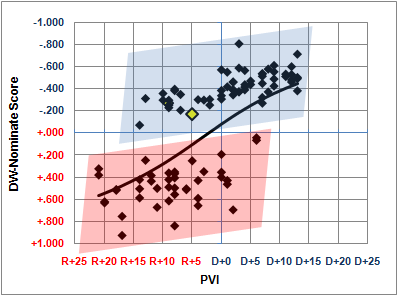 The further a Democrat is above the line that runs diagonally throughout the chart, the more valuable he is to his party relative to a typical Senator from his state. This line represents the expected DW-NOMINATE score for a Senator from a state with a given PVI. The way that the line is calculated is a tiny bit complicated: I first use logistic regression to estimate the chance of a Democrat having been elected from a state with the given PVI over the course of the last four Congresses (i.e. since 2000). I then calculate the Senator’s expected DW-NOMINATE score conditionally upon his being a Democrat and a Republican, respectively, and these numbers are combined together.

The positive score indicates that we’d expect a Senator from Indiana to be slightly more conservative than average. Bayh’s score is -.171 instead, meaning he is slightly more liberal than average. In total, he’s .274 DW-NOMINATE “points” further to the left than we’d typically expect of a Senator from Indiana. This almost exactly matches the value-added for an average Democratic Senator, which is .278 points.

Note that, conditionally upon his being a Democrat, Bayh is conservative, even relative to his fairly conservative state. Other Democrats like Mary Landrieu and Blanche Lincoln, for instance, are slightly more liberal than Bayh, even though they hail from more conservative states. And some other red-state Democrats like Mark Begich and Jon Tester are much more liberal than him. Nevertheless, a Republican from Indiana would probably also be at least reasonably conservative, and would rarely align with the Democrats on key votes. And, without Bayh holding the seat, we’d expect a Republican to get elected in Indiana the majority of the time. On balance, then, Bayh was a decent trade-off for the Democrats. Although he is not as liberal as he could be, he had a lot of value as a placeholder in preventing a conservative Republican from being elected in his place.

The rankings for all 59 Democratic Senators are listed below; Bayh ranks 25th.

While I am reasonably fond of this metric, there are obviously reasonable ways to define a particular Senator as being valuable or not valuable to his party, other than his voting record as narrowly construed. Perhaps Bayh unhelpfully shifts the Democrats’ Overton Window to the right, for instance, or perhaps he forms alliances with other Senators in such a way as to make the overall caucus more conservative. And unlike, say, in North Dakota, there is some upside to the Democrats here. Whereas it’s rather unlikely that a Democrat materially more liberal than Byron Dorgan could get elected in North Dakota, Indiana is probably capable of electing a more liberal, populist Democrat than Bayh.

Nevertheless, the fact is that over time, the median voter theorem tends to prevail, and that electing someone slightly to the left of center is usually a win for the liberal party in a slightly-to-the-right-of-center jurisdiction. (Democrats may have gotten somewhat spoiled by the elections of 2006 and 2008, during which they were winning virtually every competitive seat, but that environment no longer holds.) Although Democrats have every reason to continue to fight for Indiana, the odds in the current environment are that a Republican will prevail in the race to replace Bayh and Democrats will go from having an uncertain vote for their agenda to one who almost never aligns with them.