If you believe many media stories about the present (and future) of baseball, the sport is doomed. The current crop of young players are ruining the game: They aren’t famous enough, strike out too much and hit too many home runs. Where have you gone, Joe DiMaggio, indeed.

This is, of course, mostly just nostalgia-tinted silliness. We’re really going to complain that there are too many home runs? Really? Even if you do take offense with the prevailing style of baseball in 2019, it shouldn’t obscure the fact that today’s up-and-coming stars are objectively awesome. From Cody Bellinger and Ronald Acuña Jr. to Mookie Betts and Fernando Tatís Jr. — to say nothing of Mike Freaking Trout, who is only 28 years old — MLB is awash in young talent just begging to be properly appreciated, if we bothered to take the time.

The truth is, this particular season might contain the best group of young or prime-age hitters there has ever been, which is saying something in a sport whose history runs back to the 19th century. According to wins above replacement,1 position players age 25 or younger (as of June 30) have produced 17 percent of leaguewide value — the 25th-largest share in any season since 1901 — and those between age 25 and 30 have accounted for 28 percent of all WAR — the fifth-most ever, and second-most2 since 1917.

Added together, under-30 hitters are producing roughly 45 percent of all WAR in baseball this season, the highest share in modern history. Trout alone accounts for 1 percent of that (!) — his greatness is a whole story unto itself — but he’s not the only 20-something position player who’s shining in 2019. Here are the best players by WAR at each age and the percentile rank for their season, relative to other seasons at the same age in baseball history:

Some of this onslaught of young star power was to be expected, such as with Trout and Christian Yelich — a pair of former MVPs — or Alex Bregman, who became that kind of player last season. Even Acuña, whose full-season breakout seemed apparent from the beginning of the year, could be included on that list. Some of it has involved precocious young players maturing quickly, as in the cases of phenoms such as Tatís and Juan Soto, or midseason call-ups like Vladimir Guerrero Jr., Bo Bichette and Yordan Álvarez. Others still have either improved themselves to truly dominant levels (Bellinger, Marcus Semien) or seemingly emerged out of nowhere to become borderline MVP candidates (Ketel Marte, Pete Alonso). All have combined to give us the most potent group of under-30 position players the game has ever seen.

WAR is adjusted for the league’s run environment and the overall value of various statistics, so this isn’t just a matter of today’s players seeing their value pumped up by record home run rates. There are always only so many WAR to go around in a given season, and this crop of young batters are grabbing a greater share than any of their historical counterparts. This is “Generation OPS,” and they’ve bent the game to their will. Instead of moaning about those changes, we should take a moment to appreciate the historic nature of what they’re doing.

Of course, since WAR is a zero-sum game, other player groups have suffered at the expense of these bright young hitters. One cohort whose struggles aren’t all that surprising is older (age 30 and up) position players, who now account for just 13 percent of all the value produced in MLB. That’s the lowest share they’ve had since 1901, breaking the old record of 14 percent set last season and a far cry from the 28 percent mark which 30-and-over hitters achieved 20 years ago, at the height of the steroid era in 1999. 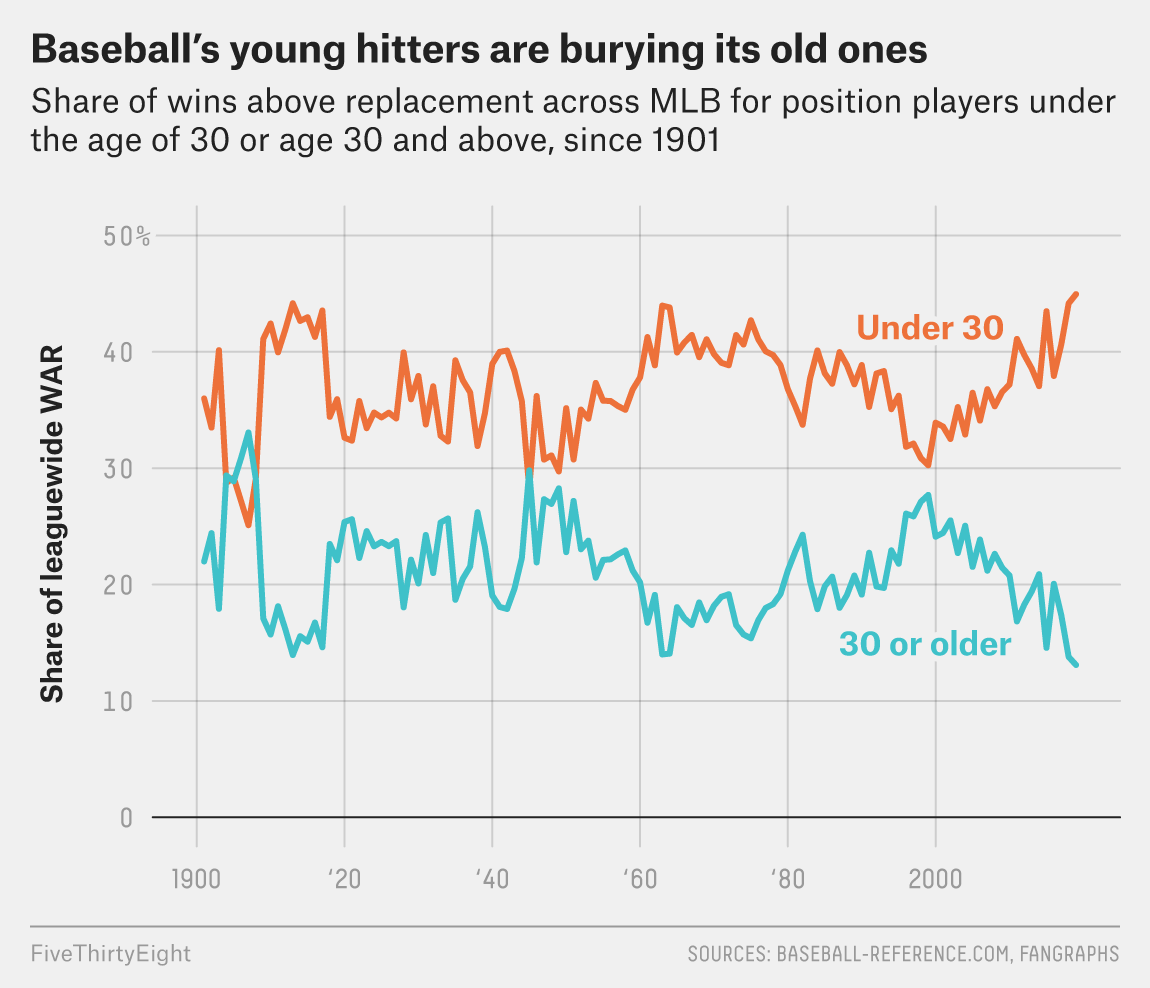 Although the effect of performance-enhancing drugs on 1990s power numbers may have been overstated, one of the underrated effects of those chemical enhancements was the extension of productive careers beyond the normal aging curve. Now that those anomalies seem to be a thing of the past, aging hitters are less valuable — and less desirable — than ever before.

Some stellar young pitchers have bucked this trend. Atlanta’s Mike Soroka, 22, is having one of the best seasons ever by a starter so young, and the crop of slightly older hurlers — which includes Lucas Giolito of the White Sox, German Marquez of the Rockies and Shane “Don’t Call Me Justin” Bieber of the Indians — have been lights out. But as a whole, pitchers age 25 or younger have put up only 17 percent of pitching WAR leaguewide and have logged only 20 percent of all innings across baseball — the lowest share of innings pitched since 1947.

Ancient pitchers (age 35 and older) aren’t in great shape, but they’ve nearly tripled their share of pitching WAR from last year.3 And prime-age or slightly old hurlers (between age 26 and 34) are doing great, recording 74 percent of pitching WAR4 and eating 73 percent of innings — the third-most ever for that age cohort.5 Despite longstanding evidence that fastball velocity and overall pitching effectiveness peaks in the early 20s and declines progressively with age, the list of 30-something pitchers having great seasons this year is incredible, especially when juxtaposed against how few batters can say the same:

As good as those older pitchers are, however, their value still pales in comparison with the young sluggers who step into the batter’s box against them every night. Amid MLB blaming its own players for not being more famous and all the complaining about Three True Outcomes, it can be easy to lose sight of how exciting this young crop of stars is. But don’t be fooled by older generations pining for a version of baseball that doesn’t exist exactly the way they want it to anymore. The game now belongs to players like Bellinger, Acuña, Tatís and Soto — and it’s going to be greater for it.

CORRECTION (Aug. 14, 2019, 10:50 a.m.): A previous version of this article incorrectly identified German Marquez’s team. He plays for the Colorado Rockies, not the Oakland Athletics.