Fame can be fickle in sports, especially for the rare player skilled (and fortunate) enough to cash in big on his athletic talents. Five years ago, Albert Pujols was baseball’s most marketable superstar. But one massive contract and two disappointing seasons later, that goodwill had faded.

Until this week, that is. Pujols belted his 499th and 500th career home runs Tuesday night, and the milestones seemed to remind fans of what he once was, and maybe still can be. Specifically, Pujols’s homers recalled the fearsome slugger who once made us seriously suspect he had been created by Cyberdyne Systems just to hit baseballs.

Still, Pujols, now 34, is fighting an uphill battle against Father Time, as well as the backlash of unmet expectations. So amid the hyperbole and wild swings in public opinion — we loved Pujols, then turned on him, and have recently warmed to him once again — let’s survey the full arc of his career to date, even if, as we saw just this week, it’s still a work in progress.

Pujols’s origin story begins with his 13th-round selection in the draft and ends somewhere during his express ride through the St. Louis Cardinals’ entire minor league system in one season. By the time he hit .329 with 37 home runs as a 21-year-old major league rookie in 2001, he had arrived. In his entire career, Pujols’s batting average has been below .300 for exactly four games. That’s it. He last finished a game with a sub-.300 lifetime average on April 6, 2001.

In his prime, Pujols’s greatest strength at the plate was his ability to hit for power without sacrificing contact. From 2001 to 2010, he was tied with Ryan Howard for the major leagues’ third-highest rate of isolated power,1 a .293 ISO that trailed only Barry Bonds’s .406 and Jim Thome’s .299. (Bonds’s stat is staggering, and mostly compiled during the performance enhancing drug-aided phase of his career, when he resembled more of a video game character than a baseball player.) Pujols struck out in only 9.5 percent of his plate appearances over that span. Among power hitters in the Late Steroid Era, a strikeout rate so low was unheard of. On the ISO list, you’d need to go down to Nomar Garciaparra at .183 (ranked 177th) to find anyone with a strikeout rate lower than Pujols’s.

Pujols was also unusually disciplined about when he chose to swing, offering at only 42.3 percent of the pitches he saw (the average player swings at about 46 percent of pitches faced), and even swinging at balls in the strike zone 2.2 percent less often than the typical hitter.2 He also swung at the first pitch less often than the norm (20 percent for Pujols versus 28 percent for the league), and constantly worked himself into hitter’s counts, seeing a 2-0 count 50 percent more often than the average hitter, and a 3-1 count 32 percent more often.

Pujols could hit nearly everything. Among MLB batters from 2002 to 2010, only Pujols and his once-teammate Matt Holliday were at least one run above average per 100 pitches against every single pitch classification that hitters see with any regularity — i.e. the fastball, curveball, changeup, etc.3 And when Pujols swung, he usually hit the ball hard. His hits went for extra bases 50 percent more often than the average player’s did. His fly balls left the yard twice as frequently as the norm. He hit home runs 2.4 times more often (on a per-at-bat basis) than the major league average.

It was all of these elements working together — the combination of contact-hitting ability, patience and raw power — that made Pujols the most devastating hitter of his generation. And then there were the non-hitting skills. Despite very little speed, Pujols was a surprisingly good baserunner, adding somewhere between 15 and 20 runs above average on the basepaths over the first decade of his career, depending on which statistical estimation you look at. And he was also the game’s best fielding first baseman during his prime, likely deserving of more than the two Gold Gloves he won in 2006 and 2010.

As dominant as Pujols was, by 2011 — the final season of a longterm deal he signed with St. Louis in 2004 — the cracks were starting to show. In his first 10 major league seasons, Pujols had never dropped below 5.5 wins above replacement (regardless of whether you look at Baseball-Reference’s or FanGraphs’ version of the statistic) and was often in the 7 to 9 WAR range. But In 2011, Pujols, then 31 years old, posted roughly 4.9 WAR4 — easily a career low. His seasonal batting average fell below .300 for the first time ever, and his power was down. Plus, by FanGraphs’ estimation, he also had his worst baserunning and fielding performances in years.

It was easy enough to write those numbers off, though. Pujols’s average was down largely because of a low .277 BABIP,5 which can vary from year to year due in no small measure to luck. His ISO matched his previous career lows, but in each prior case he’d bounced back to post monster power numbers within two seasons of the down year. Pujols turned in a great postseason performance for the Cardinals in 2011, culminating in a 1.064 OPS during the World Series. Why look for trouble with Pujols, baseball’s most automatic hitter?

Then came The Contract.

Star players leaving teams in free agency is nothing new, but Pujols’s move to the Los Angeles Angels of Anaheim struck a particular nerve with fans. Words like “greed” and “betrayal” were quickly thrown around. It didn’t help that Pujols had previously spoken about his desire to end his career in St. Louis. Money, he’d said, didn’t matter to him.

After leaving St. Louis for Anaheim, Pujols invited the expectations that come with a $240 million deal — expectations that are rarely met. Take a look at the dollar-value returns on other notable MLB position-player contracts of the last decade-plus, according to FanGraphs data6: 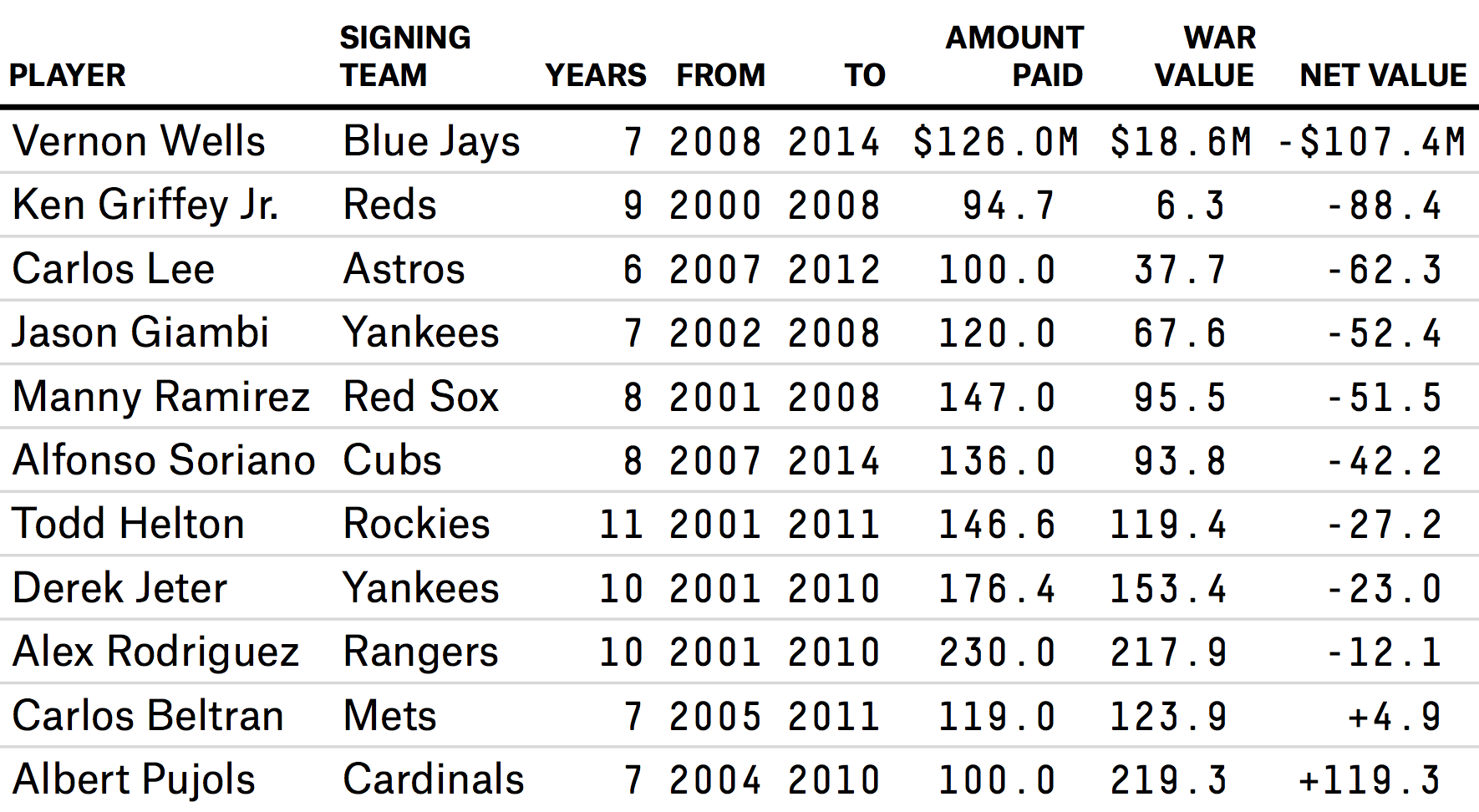 Ironically, the only one of those contracts that ended up being a big bargain for the signing team was Pujols’s previous seven-year pact with the Cardinals, signed in February 2004.7 But that deal was given to a 24-year-old Pujols, and would take him through age 30 (with a team option for his age-31 season). The next contract, with the Angels, was for a 32-year-old Pujols, and would run until the slugger was 41. That’s why some critics panned the Angels’ move before Pujols had ever played a game for the team.

When Pujols did finally start playing for Los Angeles, the initial results were mixed at best. A miserable .570 OPS in April 2012 gave way to good — if not exactly Pujolsian — numbers over the rest of the season, but his overall value was down by about .5 WAR in 2012. Meanwhile, 2013 was a complete disaster: Pujols missed 63 games with a foot injury and posted the worst statistical rates of his career when he did take the field, likely a byproduct of playing through the ailment for four months before being placed on the disabled list in late July.

The once great mix of power, patience and contact skills was disintegrating. Instead of rebounding after 2011, Pujols’s isolated power continued to plummet, bottoming out at .179 (still above the MLB average, but 100 points lower than his career rate) a year ago. Only 10.6 percent of his fly balls have left the ballpark since he became an Angel, a career low.

Some of this is attributable to ballpark effects — Pujols played in hitter’s parks (both the second and third Busch Stadiums) during his prime, while Angel Stadium is one of the more pitcher-friendly parks in the majors. But it also reflects a change to Pujols’s underlying skills that we can detect by looking at his strike zone outcomes. Pujols’s strikeout rate immediately spiked to 11.3 percent upon arriving in Anaheim, followed by another increase to 12.4 percent in 2013 — his highest whiff rates since he was a rookie. He was showing uncharacteristic vulnerability to breaking pitches, and not punishing the fastball the way he used to. And, most alarming, he began swinging the bat far more often than he had in St. Louis. Cardinals Albert rarely chased balls outside the strike zone, but Angels Albert was suddenly going after bad pitches 3 to 5 percent more often than the average player.

The little things were falling by the wayside as well. The smart, heady baserunner who, in his prime, made up for a lack of speed by capitalizing on 49 percent of his advancement opportunities was suddenly taking extra bases at only a 39 percent clip. And Pujols’s defense in 2013 was worse than it had been in a decade.

The preseason narrative was that this year would be different. Every player claims health in spring training, so much so that it’s a running meme to mock stories about players coming to camp in “the best shape of their lives.” Pujols tried it in March, telling anyone who would listen that his painful plantar fascia injury was a thing of the past, and that he was ready to silence the doubters. You would have been forgiven for being skeptical, though, given that this was a 34-year-old slugger coming off four straight years of declining production.

However, this season already seems promising. There’s the 500th home run, of course, but also an April that was reminiscent of Cardinals Albert. Pujols is hitting the ball with terrific power again — over 14 percent of his hits have gone for extra bases — and he’s mashing fly balls for home runs, instead of harmless flyouts. His strikeout rate is back down under 9 percent, where it was during his best seasons. And his per-inning rate of defensive runs saved at first base is back up where it was before last year’s collapse.

All isn’t what it once was, though. Worryingly, Pujols is still swinging the bat more than he used to — and chasing more pitches outside the strike zone than the average hitter. In spite of his decreased strikeout rate, he’s also making less contact now than ever before, as a percentage of his swings. And his baserunning may never again be where it was in his prime.

In other words, age is catching up to Albert Pujols, as it does to every ballplayer. But the early returns suggest his 2014 won’t be nearly as trying as his 2013, or even his 2012, was. And, perhaps more important, his reception this week suggests that fans may be ready to move past heaping scorn on his mega-contract with the Angels and the way he left St. Louis. Pujols probably won’t ever again be the same all-around superstar he was during his peak years as a Cardinal, but we should still enjoy what he is now: a future Hall of Famer who still has plenty of artistry left in his once-legendary bat.