Timing is everything. And for Joe Moser the timing was bad.

He graduated from the University of Iowa’s law school in 2011, one of the worst years to graduate from law school ever. He worked as a bartender in St. Louis, Missouri, while applying for jobs. It took about a year for him to land his first, with a small law firm. While he was glad to be working on cases instead of mixing drinks, he wasn’t happy with his paycheck.

“Starting out, I was earning less than anticipated, but I just counted myself fortunate to have gotten a job at all,” said Moser, now 29 and an attorney with a medium-size firm doing mostly civil litigation in Des Moines, Iowa.

A bad economy had pushed Joe to go to law school in the first place. When he got his bachelor’s degree from Saint Louis University in 2008, right in the heart of the Great Recession, he was dispirited about finding work. The rising unemployment rate for young people solidified his choice to go to law school directly from undergrad, rather than try to work for a few years. “There weren’t a lot of jobs for my class anyway,” he said.

Many of Joe’s peers found themselves in similar situations. The financial crisis and Great Recession that ran from 2007 to 2009 were a shock to the entire U.S. workforce, but it was worst for those just starting their careers. College-educated millennials like Joe, who began to look for a first job in the depths of the recession and slow recovery, were hit especially hard.

We’ve long known that millennials — the Snapchatting army of those born between 1980 and 1997 — face unique economic challenges.1 They are poorer today than Americans of the same age in 1989. Many are also deep in a hole of student loan debt, unlike any generation has seen before. They are less likely to own a home — and if they do, those homes tend to be worth much less than the starter homes of twenty-somethings and thirty-somethings in the recent past.

Now, six years after the Great Recession officially ended, we’re starting to understand that these setbacks might permanently affect this generation’s careers and lifetime earnings.

For starters, millennials earn less money than people of the same age earned 25 years ago, according to the Federal Reserve’s 2013 Survey of Consumer Finances. While the median income of all households fell 12 percent between 2007 and 2013, it dropped 19 percent for those headed by 18- to 33-year-olds (compared with the same age cohort in 2007). If anything, these numbers may overstate income: The data set doesn’t count millennials living with their parents. (The survey only covers the heads of households.) 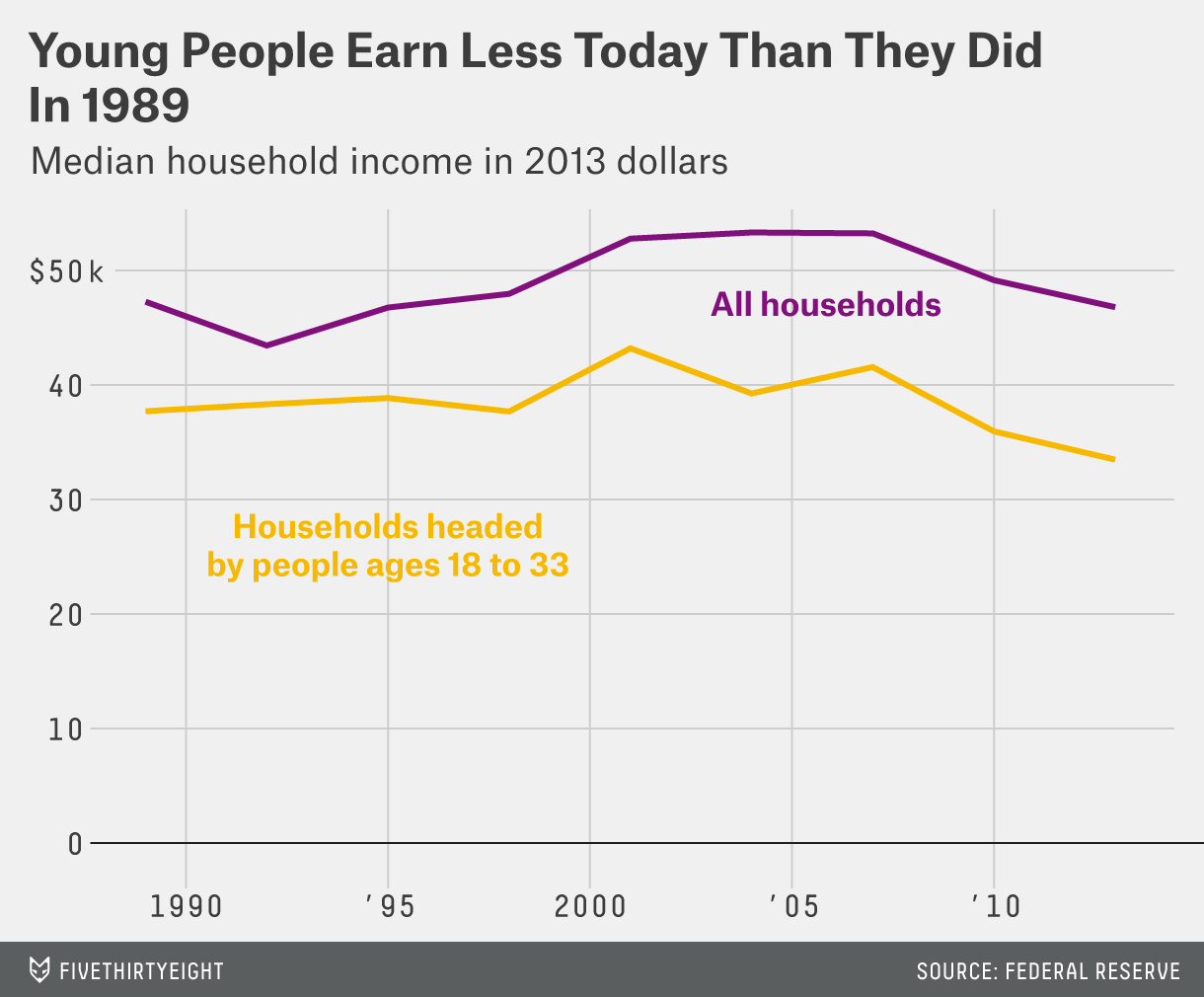 Yet the Great Recession, blunt as it was, didn’t affect this generation equally. While it left economic scars on older, college-educated millennials — let’s call them “bubble” millennials — they at least had a few years to get their careers started before the job market took a nose dive.

Millennials who are a little younger — call them the “recession” millennials, the ones like Joe with bad timing — were knocked flat on their backs before they even had a solid footing.

We can see the different impacts in the income gap between these two groups. The median household income of bubble millennial college graduates was about $66,000 in 2013, down nearly 25 percent from the same age group’s earnings in 2007. But the median college-educated recession millennial is earning 36 percent less, or $49,000. 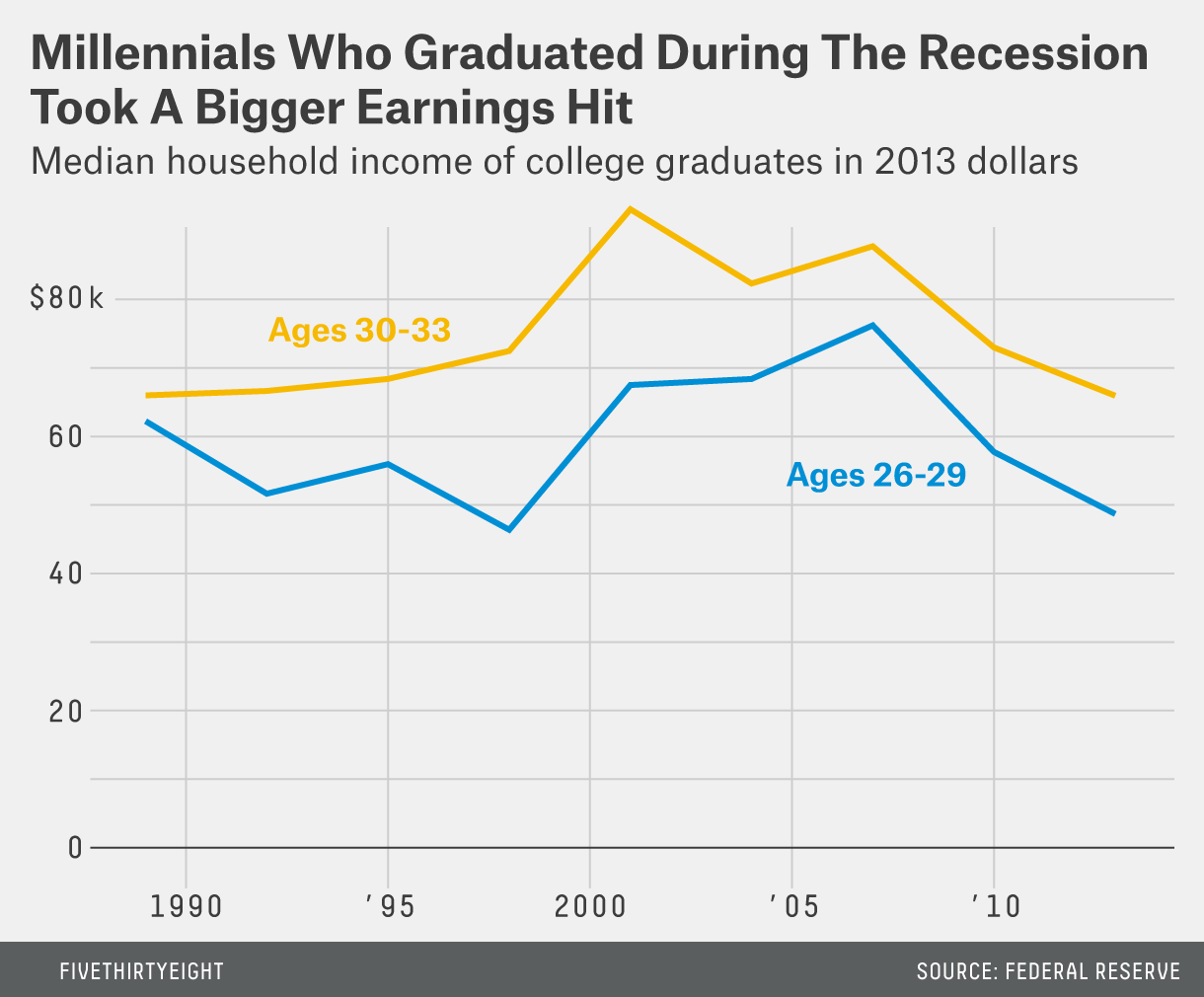 Richard Palmer, like Joe Moser, is a recession millennial. And like Joe, Richard began his career earning a disappointing paycheck.

After graduating in 2008 from Howard University, he got a job selling tickets for the Cleveland Cavaliers by making cold calls. “I honestly didn’t know what to expect,” said Richard, who is now 28 and lives in Raleigh, North Carolina. “But the income was on the lower-end; it was commission-based.” The ticket sales job lasted a year, and then he went on to graduate school, earning an MBA from Seton Hall University in 2011. That led to work as a sales manager for Reebok for three years, before he got laid off last March. He’s been searching for jobs since.

Already unlucky because of their graduation timing, Richard and Joe — like many millennials — are also burdened with tens of thousands of dollars in education debt.

“It’s always over your head: the number,” Richard said of his student loans. “Instead of buying this pair of sneakers, I’ll have to focus on paying off the loans.” 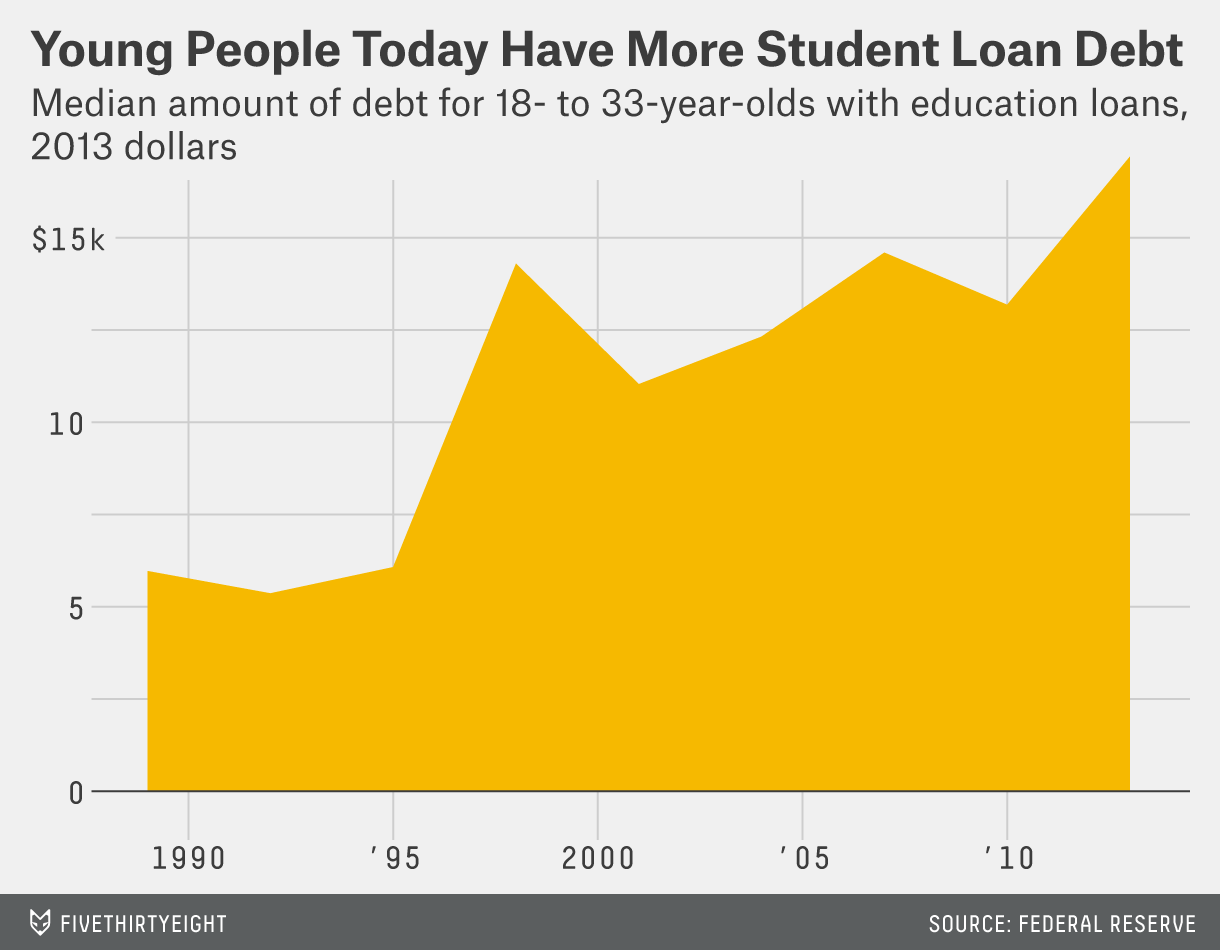 “No question about that — it’s a burden,” Joe said. “I barely scratch at the principal of my loans; the interest costs are so high.”

Joe considered buying a house, but ultimately just couldn’t pull it off because of his debt payments. A new car is too much as well. “I’ll be running my trusty Toyota into the ground,” he said.

And when millennials are homeowners, their homes are worth less. The median value of a home owned by a millennial is $133,000 — a steep drop of 32 percent from a median of $197,000 in 2007 for those in the same age bracket. Compared to all households, whose homes dropped in value by 24 percent between 2007 and 2013, young homeowners are much worse off. 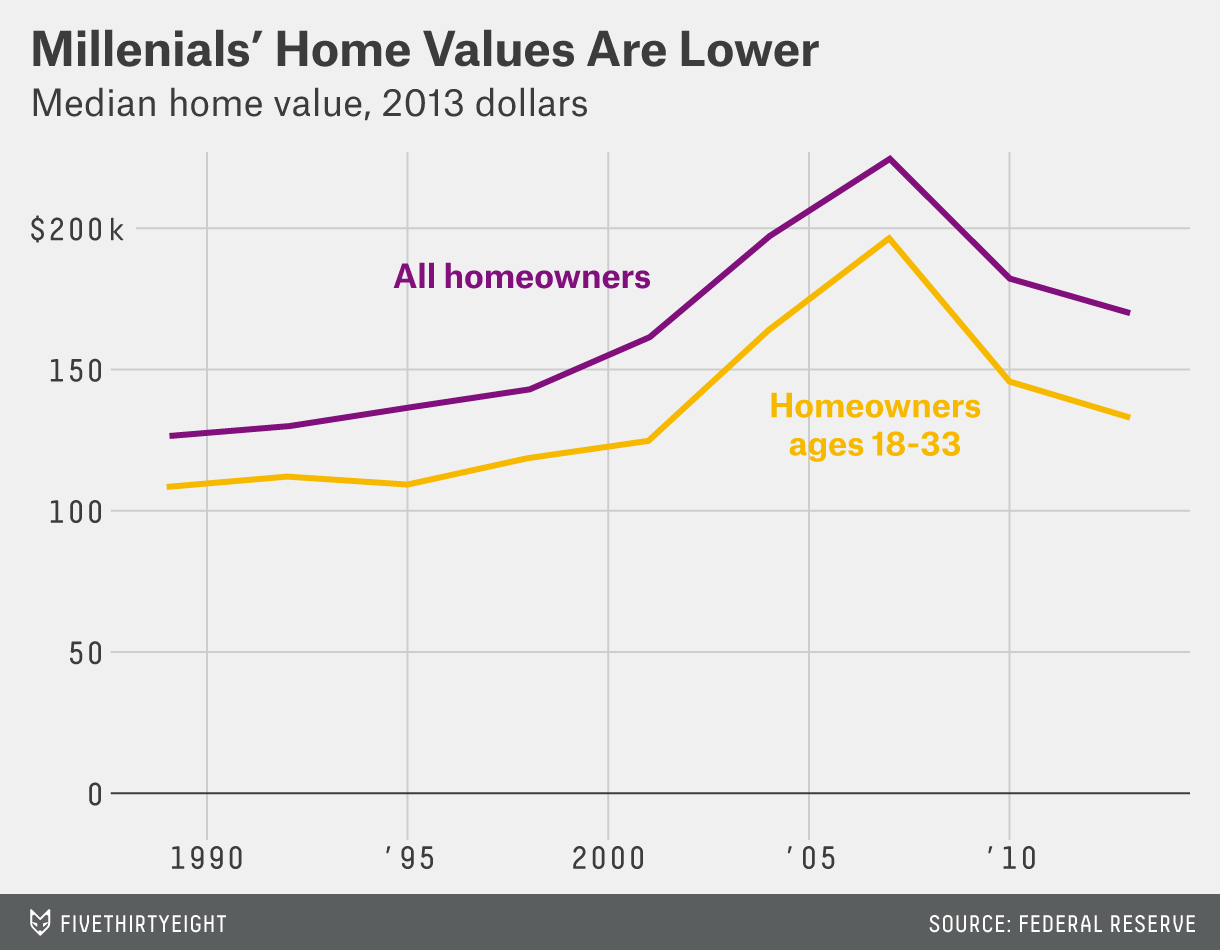 Still, compared to his peers, Joe feels like he’s doing OK: “I’ve certainly had friends that struggled to find jobs; that moved home; that worked, doing whatever they could, to scrape by.”

But what’s worse, recession millennials like Joe, Richard and their friends are hard-pressed to make up the ground they lost, just because of their unlucky timing. Research from Yale University economist Lisa Kahn shows that when college graduates enter the labor market affects their lifetime earnings. Her 2009 article in Labour Economics studied the timing of college graduates in the early 1980s using the National Longitudinal Survey of Youth. Those who graduated in a bad economic year had lower earnings even 14 to 23 years later. Specifically, for each percentage-point increase in the unemployment rate when graduating from college, there was an average wage loss of 3 to 4 percent per year.

Kahn’s research on graduating in a recession indicates that Joe, Richard and other recent college graduates will feel the effects for decades.