Polling in the early stages of the nomination race can be extremely fluid, but ordinarily a candidate who is in fourth place with a week to go would have little chance of winning a state primary. This is why the FiveThirtyEight forecast model is skeptical about Rick Santorum’s chances of winning South Carolina, where his numbers have slumped since his near-victory in Iowa on Jan 3. 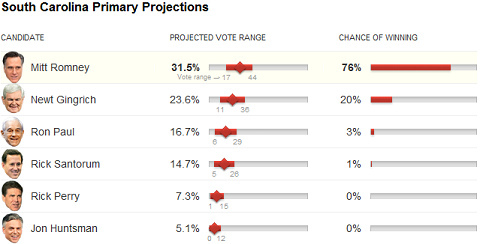 The forecasts, however, are intended to form a benchmark based solely on top-line polling numbers and do not consider other dynamics that may be pertinent.

In the case of South Carolina, those dynamics could be favorable to Mr. Santorum after he received the backing of a significant group of evangelical leaders on Saturday. (According to exit polls, 60 percent of voters in the South Carolina Republican primary identified themselves as born again or evangelical in 2008.) Meanwhile, each of the candidates who is ahead of Mr. Santorum in the polls has vulnerabilities.

Mitt Romney has led all recent South Carolina polls and is the favorite to win there. But, for the first time, he is facing sustained negative attacks from his rivals, who seem to have realized that another win for him would all but cinch the Republican nomination. It is not clear whether the attacks will work — they could even backfire — but this introduces a wild card into the race that was not present in Iowa and New Hampshire.

Nor will Mr. Romney necessarily have the benefit of the strong ground game and grass-roots support that helped ensure his victory in New Hampshire. Although he has received the endorsement of South Carolina’s governor, Nikki Haley, Ms. Haley’s popularity is middling in the state, and Mr. Romney has very few endorsements from rank-and-file Republicans in South Carolina, like those in the state House and Senate.

Through Sept. 30, meanwhile, Mr. Romney had raised only $75,000 in contributions from South Carolina — barely a third of his fund-raising haul in New Hampshire, even though South Carolina has almost four times as many residents.

The candidate in second place in the South Carolina polls, Newt Gingrich, closed poorly in both Iowa and New Hampshire — the result of his being especially susceptible to negative attacks, and having a weak field operation that had trouble turning out his vote.

While Mr. Gingrich’s campaign has adopted a more aggressive posture in South Carolina, he may continue to be viewed as an attractive target by the other campaigns. The second-place choices of Mr. Gingrich’s supporters are about evenly divided between several different candidates, which means that they might each have an incentive to go after him.

Particularly if the dominant storyline in South Carolina is a series of attacks between Mr. Romney, Mr. Gingrich and the “super PACs” that support them, there might be an opportunity for a candidate to rise with a more affirmative message.

Ron Paul, who has the clearest momentum from New Hampshire and who has moved ahead of Mr. Santorum in our South Carolina forecasts, might be one such candidate. So far, Mr. Paul has resisted piling on to Mr. Romney for his tenure at Bain Capital, instead reminding Republican voters of the party’s longstanding commitment to free-market ideals.

However, the South has not traditionally been receptive to libertarian politics. Instead, voters in the region are strong social conservatives, and are relatively hawkish in their foreign policy views, while sometimes having ambivalent feelings about economic policy and supporting some elements of the welfare state.

Mr. Paul’s message is more flexible than you might think: it has taken on populist undertones at times, as when he has critiqued what he calls “‘crony capitalism.” Nevertheless, the recent Public Policy Polling survey of South Carolina found that his favorability rating was just 38 percent there, and he would need to win the large majority of those voters to win the state.

That leaves Mr. Santorum. His favorability rating, 53 percent, was considerably better than Mr. Paul’s in the Public Policy Polling survey, and his 30 percent unfavorable rating was the lowest of any Republican candidate in the state. Like Mr. Paul, Mr. Santorum has avoided attacking Mr. Romney about Bain Capital, trying to maintain his positive image.

As The Atlantic’s Molly Ball notes, there is a parallel between the endorsement Mr. Santorum received on Saturday and the backing he received from influential conservatives like Bob Vander Plaats in the days leading up to Iowa. Those endorsements helped to break a logjam between Mr. Santorum and other conservative candidates as voters behaved tactically and jumped on his bandwagon.

The extent to which there is a consensus of voters who want to defeat Mr. Romney in South Carolina is unclear. In the Public Policy Polling survey, 58 percent of voters said they would prefer another candidate to Mr. Romney. Nevertheless, Mr. Romney led hypothetical one-on-one matchups against several Republican opponents in the poll, including against Mr. Santorum, and Mr. Romney’s favorability ratings were reasonably strong.

The scenario in which Mr. Santorum would actually win South Carolina, therefore, probably requires two things. First, Saturday’s statement would have to get voters to take another look at him at the expense of other conservatives like Mr. Gingrich or Mr. Perry. And second, the negative attacks by Mr. Gingrich would have to succeed in softening up Mr. Romney’s support, but not play to Mr. Gingrich’s direct benefit either, allowing Mr. Santorum to leapfrog both and win with perhaps 25 percent of the vote.