Following the departure of two of her key advisers over the holiday weekend, you’re likely to see a lot of speculation about whether Michele Bachmann’s campaign is headed for the political graveyard.

This column, I suppose, is a contribution to that genre — but let’s keep it simple and focus on the key polling data.

First, we can look at a snapshot of the polls for Mrs. Bachmann as well as the two leading Republican contenders, Rick Perry and Mitt Romney. What I’ve done in the chart below is plot the trend line for polls of Republican primary voters conducted since April, removing the individual data points to reduce clutter. 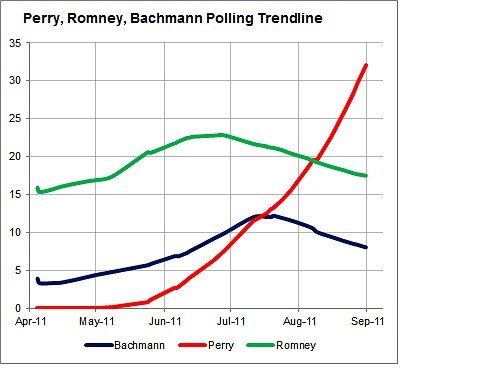 We see that Mrs. Bachmann’s numbers have faded a bit — to an average of about 8 percent, as compared with a peak of roughly 12 percent that she achieved in mid-July. It’s not a catastrophic decline, but since we’re now seeing quite a few polls of Republican voters, it’s larger than can be explained by statistical noise alone.

Mr. Romney’s numbers are also off some — to an average of about 18 percent now, down from about 23 percent as of late June.

The common denominator may of course be Mr. Perry, who continues to gain ground in the surveys at the expense of all other candidates. The NBC News/Wall Street Journal poll released on Tuesday morning has Mr. Perry all the way up to 38 percent of the vote, and the Politico/Battleground poll has him at 36 percent — although other surveys still have him in the mid-20s.

Is Mrs. Bachmann fading solely because Mr. Perry is gaining? Or are her problems, to some extent, of her own making?

Neither explanation is exactly good news for her campaign, but the former might provide her with a bit more hope, since Mr. Perry’s numbers could erode some after he participates in his first Republican debate on Wednesday and as the other candidates begin attacking him.

The best way to check this is to look at Mrs. Bachmann’s favorability numbers among Republican voters, which Gallup tracks on a rolling basis.

Gallup publishes something called the “positive intensity score,” which measures opinions of the candidates among Republican voters who recognize their names. But I think we get a more complete story in this instance if we keep the voters who do not recognize the candidate within the survey universe. 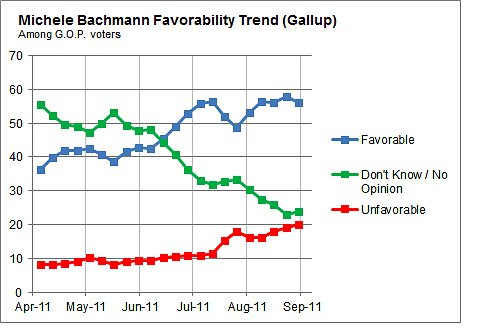 What we see, unsurprisingly, is that there’s been an increase in Mrs. Bachmann’s name recognition since she announced her candidacy in late June — but also an increase in her negatives. In Gallup polling conducted from June 27 through July 10 — essentially, the two weeks immediately following the initiation of her campaign — 56 percent of Republican voters held a favorable view of Mrs. Bachmann, against 11 percent unfavorable, with the remaining 33 percent of Republicans not yet recognizing her name or not yet having formulated an opinion.

In the most recent Gallup data, which runs from Aug. 22 through Sunday, Mrs. Bachmann’s favorability rating is 56 percent — the same as it was before. Her unfavorable rating has increased to 20 percent, however, while the number of Republicans not registering a view about her has declined to 24 percent. In other words, as she has become more widely recognized over the past two months, essentially all of the movement in Ms. Bachmann’s favorability numbers has been negative.

So does Mrs. Bachmann still have a chance?

Some perspective here: Jonathan Bernstein noted several weeks ago that he thought that the chance of either Mr. Perry or Mr. Romney winning the nomination was in excess of 90 percent. Betting markets, by contrast, put their combined chances at about 70 percent. I suspect Mr. Bernstein’s answer is closer to the mark. Mr. Romney and Mr. Perry are capable candidates who form a nice contrast to one another, have plenty of credentials and fund-raising prowess, and are ahead in the polls. So this question could be asked of any candidate other than those two.

But as for Mrs. Bachmann’s path, it’s always run through Iowa, where she was born and where the electorate is exceptionally conservative. So we’re essentially asking a two-part question: first, can Mrs. Bachmann win Iowa? And second, what happens if she does?

As to the first component, I do not think we can count Mrs. Bachmann out in Iowa. The most recent polls of the state have her falling a bit behind Mr. Perry there — but she trails him by only about six points, just a fraction of her deficit against him in national polls. (Mr. Romney trails Mr. Perry by about the same margin.) And Mrs. Bachmann won the Ames Straw Poll, which does have some predictive power in calling the winner of the Iowa caucus itself — more so than early-stage polls of the general population.

Mr. Perry’s name was not on the ballot in the straw poll, so this indicator may be less useful than in past years. Still, the Ames victory speaks to Mrs. Bachmann’s grass-roots support and ability to organize in the state. She may no longer be the favorite in Iowa, but she retains a decent chance. And since the bounce that candidates receive coming out of the state is a function of both expectations as well as absolute performance, a win there could become more meaningful for her, strangely, the less likely that it had seemed going in.

But would it give Mrs. Bachmann enough momentum to surge past both Mr. Perry and Mr. Romney?

Last month’s Public Policy Polling survey of Republican voters might provide a clue. It tested the three candidates in various combinations against one another.

In a head-to-head match-up against Mr. Romney, for example, Mrs. Bachmann trailed 49 percent to 40 percent. Those aren’t great numbers, especially since Republican elites — justifiably concerned about Mrs. Bachmann’s electability — would try to stack the deck in Mr. Romney’s favor. But it also isn’t necessarily an insurmountable deficit.

The problem is that this assumes that Mr. Perry’s campaign somehow just disappears. A loss in Iowa might be harmful to Mr. Perry, but it would probably not put him out of the running, with key Southern states like South Carolina also set to vote early in the primary process. If Mrs. Bachmann and Mr. Perry were to continue to split the conservative vote, the ultimate beneficiary in that case might instead be Mr. Romney.

If I were to write a script involving Mrs. Bachmann winning the Republican nomination, it would probably require Mr. Perry’s campaign to be already in a somewhat weakened state prior to Iowa because of a gaffe or some other key misstep. Then, perhaps, a disappointing performance in Iowa could be more of a death blow to him, with Mrs. Bachmann getting her head-to-head match-up against Mr. Romney — a very challenging but not impossible task.

Still, the combination of Mr. Perry’s emergence, and Mrs. Bachmann’s inability to broaden her appeal as she has become better known to voters, have put her in a difficult position. There are so many hurdles to clear in this scenario, not all of them within Mrs. Bachmann’s immediate control, that there probably isn’t more than one chance in 25 of things coming together in just the right way.