Some Democrats are giddy that the Tea Party provocateur and four-term incumbent Michele Bachmann has announced her intention to retire from Congress — but her decision may allow Republicans to avoid a toss-up race in what would otherwise be a reasonably safe district for the G.O.P.

In the chart below, I’ve plotted a comparison between Mr. Obama’s performance and the performance of the Democratic House candidate in 2012 in all Congressional districts in which both a Democrat and Republican were running. As you can see, the correlation has become very strong. 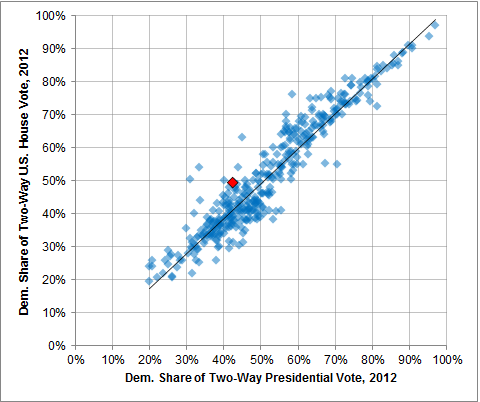 Mrs. Bachmann’s district, highlighted in red, is not the largest outlier. But the other cases where Democrats so substantially overperformed their presidential vote were in districts where they had a longtime incumbent of their own running — not when they were running against one. (The Democrat Nick Rahall won re-election in West Virginia’s Third Congressional District, for example, where Mr. Obama won only 33 percent of the vote.)

That’s not to say that Democrats will have zero chance of picking up Mrs. Bachmann’s seat. The party won a few open-seat or special-election races in such districts in 2006 and 2008, strong years for the party. And they won the open United States Senate race in North Dakota last year, which gave a similar share of its vote to Mr. Obama.

But parties rarely have strong years in midterm elections when they hold the White House, and Congressional races are becoming more and more predictable based on the overall partisanship of a district. The Democrats’ chance of winning the Minnesota seat might now be on the order of 5 to 10 percent, versus perhaps 40 percent with Mrs. Bachmann on the ballot.