We continue our Presidential Geography series, a one-by-one examination of each state’s political landscape and how it is changing. Here is Michigan, the Wolverine State. FiveThirtyEight spoke with Bill Ballenger, the editor and publisher of Inside Michigan Politics; and Matt Grossman, an assistant professor of political science at Michigan State University. 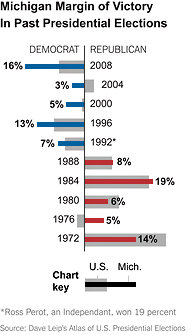 The government’s rescue of the American automobile industry appears to have given President Obama a slight boost in Ohio, whose 18 electoral votes may very well decide the nation’s next president. Even at times when the presidential race has been a dead heat nationally, Mr. Obama has retained a consistent lead in Ohio, a state that has usually been slightly Republican-leaning relative to the country as a whole.

But in Michigan — the home of the auto industry — the political effects of the rescue of General Motors and Chrysler have received less attention. Mr. Obama carried Michigan by 16 percentage points in 2008, suggesting the state’s 16 electoral votes were out of reach for Mitt Romney, rescue or no rescue.

There are a few problems with this logic, however. First, Mr. Obama’s margin in 2008 was somewhat inflated. Senator John McCain essentially conceded the state, pulling his campaign out of Michigan about a month before the election. Polls showed Mr. Obama’s lead quickly ballooning. Had Mr. McCain contested Michigan through the final month, the 2008 margin might have been closer.

Mr. Romney was also born in Detroit and raised in suburban Bloomfield Hills. His father, George Romney, was governor of Michigan from 1963 to 1969. Presidential candidates have historically received an average bonus of roughly seven percentage points in their home state. In fact, the last native Michigander to run for president, Gerald Ford, received that exactly, winning Michigan in 1976 by five percentage points while losing the national popular vote by two.

Nonetheless, the Romney campaign doesn’t seem to be seriously contesting Michigan. In the last 30 days, Ann Romney and Representative Paul D. Ryan have each visited the state once, but neither Mr. Romney nor Mr. Obama has campaigned there.

In a campaign with a native son on the ballot, “Michigan has lost its battleground status,” Mr. Ballenger said.

Can Mr. Obama thank the auto rescue for keeping Michigan out of play? Partly, but Mr. Romney is also unlikely to get a big home-state bonus, local analysts said. 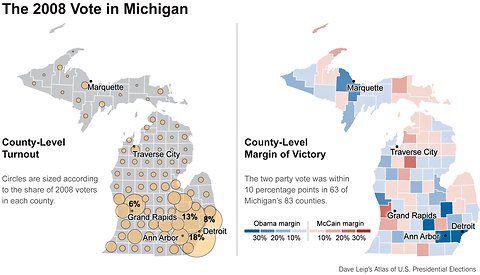 As cultural conservatism gained sway in the Republican Party nationally, however, socially moderate voters in suburban Michigan began favoring Democrats. This realignment was not as pronounced as it was in New England or the rest of the Northeast; Michigan has a strong anti-abortion movement. But the Wolverine State was relatively balanced politically — “It was the old Ohio,” Mr. Ballenger said — and a small shift toward the Democrats tipped the scales.

Democrats have carried Michigan in the last five presidential elections. The state’s leftward lean increased from two percentage points in 1992, relative to the national popular vote, to nine points in 2008.

Detroit, though a shadow of its former size, is heavily African-American and overwhelmingly Democrat-leaning. About half of Mr. Obama’s margin of victory in the state in 2008 came from Wayne County, where Detroit is. Democrats are also dominant in college towns like Ann Arbor and East Lansing; the state capital, Lansing; and smaller industrial cities like Flint.

The traditional base of Republican support is in the southwest, around Grand Rapids, where many voters are fiercely anti-abortion, influenced by the socially conservative Reformed Church in America (formerly the Dutch Reformed Church).

North of Grand Rapids and Flint, the state is more sparsely populated. The northern part of the lower peninsula is solidly Republican. The Upper Peninsula is traditionally blue-collar Democratic, but socially conservative and wary of gun control and environmental regulations, according to The Almanac of American Politics.

The two main political battlegrounds in Michigan are just north of Detroit: Oakland and Macomb Counties.

Macomb County is the birthplace of the “Reagan Democrats,” the socially conservative, white, working-class Democrats who voted for Ronald Reagan. Even after Reagan, Macomb County has been willing to vote Republican. George W. Bush carried it in 2004.

Macomb County is not as blue-collar as it once was, but it still has a lot of workers in the auto and related industries. Had there been no auto industry rescue, Macomb County voters — their connection to the Democratic Party already weak — might have moved even further to the Rep
ublican ticket. In fact, Mr. Romney may still carry the county; Mr. Obama won it with 53 percent in 2008.

The other main swing county in Michigan is Oakland County, where Mr. Romney grew up. Oakland County has gone from a Republican bastion to a battleground as socially moderate voters in bustling suburban towns like Farmington Hills and West Bloomfield have trended Democratic. This area has also grown increasingly diverse, as middle-class African-American families have moved there from Detroit.

The partisan shift in Oakland County has made it an almost perfect bellwether for the statewide vote. It was one percentage point more Republican than the state in 2008 and roughly two points more Republican-leaning in 2004 and 2000. If Mr. Romney is having a really good night, and the Michigan vote is unexpectedly close, it will be apparent in Oakland County and Macomb County (itself a decent bellwether), which together accounted for almost a quarter of the vote in 2008.

Mr. Obama is a 97 percent favorite to carry Michigan, according to the current FiveThirtyEight forecast.

It is impossible to know what would have happened if General Motors and Chrysler had not been rescued, but Michigan’s economy might have been in far worse shape than it is now. The state’s unemployment rate is relatively high, at 9.3 percent, but it has dropped precipitously from a peak of more than 14 percent.

In addition, Mr. Romney doesn’t appear to be getting a substantial home-state benefit, both Mr. Ballenger and Mr. Grossman said.

Ford represented Michigan in Congress for more than two decades. Mr. Romney, a former governor of Massachusetts, spent most of his adult life living outside of Michigan and was never elected to any political office in the state.

Mr. Romney didn’t appear to receive much of a home-state bonus in Michigan’s 2012 Republican primary. He squeaked by Rick Santorum by just three percentage points.

The FiveThirtyEight model currently projects Mr. Obama to carry Michigan by seven percentage points and the nation by 1.5 points. That would make Michigan 5.5 percentage points Democratic-leaning relative to the national average, almost exactly where it was from 1996 to 2004.

It is possible the boost to Mr. Obama from the auto rescue and Mr. Romney’s home-state bonus are canceling one another out. Or, perhaps neither is having a substantial effect.

“Michigan has been slightly to the left of center for a while now,” Mr. Grossman said, “and it doesn’t seem to be moving a whole lot, in my view.”