I’m reading a compelling new book, Authoritarianism & Polarization in American Politics, co-written by Marc Hetherington and Jonathan Weiler. (Disclosure: Jon is a longtime friend; we were in grad school together at Univ. of North Carolina.) The book is an examination of how authoritarian tendencies among American citizens inform and explain attitudes toward government, public policies and their fellow citizens. It is impossible to summarize the book properly in a blog post, but I wanted to hit on some of the points that struck me, many of which were unsurprising and yet startling to see demonstrated empirically.

The first point Hetherington and Weiler make is that authoritarianism is really about order–achieving it, maintaining it, and affirming it–and especially when citizens are uncertain or fearful. This, they say, is why authoritarians seek out and elevate, well, authorities–because authorities impose order on an otherwise disordered world. They provide a useful review the existing literature on authoritarian traits, which have been connected to negative racist stereotyping, a belief in biblical inerrancy, a preference for simple rather than complex problem-solving, and low levels of political information. 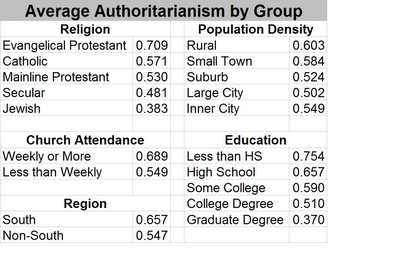 Hetherington and Weiler expand and update the authoritarian literature by applying it to contemporary controversies. For example, what they measure and define as “maximum authoritarian” types show much lower support for gay marriage and gay adoption (19 percent, 28 percent) than do “minimum authoritarians” (71 percent, 89 percent). Maximums are three times more likely than minimums to support the government use of wiretaps without a warrant in the war on terror (60 percent to 19 percent), and four times more likely to say it is unacceptable to criticize the president about fighting terrorism (33 percent to 8 percent).

And what do authoritarians look like? The table above–which I have reproduced from Table 3.2 (p. 39) of their book–shows average levels of authoritarianism by descriptive characteristics that, taken together, produce a composite image: rural, southern, under-educated, evangelical Protestant churchgoers. Is it any wonder that when George W. Bush was down to his bottom 30 percent of public support during his second term so much of that support derived from people fitting this profile? And although there is a strong connection between authoritarianism and conservatism (and thus Republicanism), as Hetherington and Weiler caution, authoritarianism is not bounded by party: Among 2008 Democratic primary voters there were significant splits on issues of race and immigration, smacking of authoritarian impulses, that played a role in support for either Hillary Clinton or Barack Obama. “There is strong suggestive evidence that authoritarianism was a core reason for the voting behavior of nonblacks” in the Democratic primary, they conclude.

As for the current debate over health care, some of the same cleavages exist. In a recent piece for the Huffington Post, Weiler talks about race and authoritarianism in the context of the health reform debate: “In sum, there is reason to think that beneath the arguments about government intrusion into the health care market, death panels, and such, a much more visceral dynamic is at work. To be perfectly clear, it is far from the case that every opponent or skeptic of significant health-care reform is a racist or racially motivated in her or his thinking. But there is, at the least, very strong circumstantial evidence that views of race and beliefs about health care reform are linked significantly among many Americans, which probably explains why the debate on health care reform has caused a much stronger uproar in 2009 than it did in 1994.”

Reading the book, I kept hearing echoes of Glenn Greenwalds’s book, A Tragic Legacy. Greenwald’s book is a character study of Bush43 and the Bush White House, its Manichean worldview, and what that meant for public policy. But an us-v-them, good-v-evil governing mentality is only possible in a democracy where authoritarian currents run deep enough to sustain (and re-elect) such leadership. The governing atmosphere Greenwald describes makes even more sense after reading Hetherington and Weiler.