Campaign season is heating up in Australia, following the call of a snap election by Prime Minister Julia Gillard last weekend. With voting scheduled take place on 21 August, many questioned whether the ruling Labor Party, who rather suddenly ousted former Prime Minister Kevin Rudd in late June would be able to recover from sagging approval numbers, a largely stalled agenda, and an unexpected coup at the top. 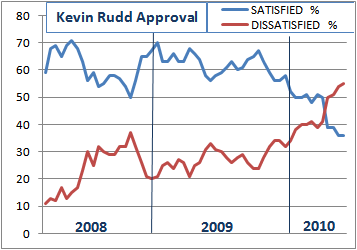 In fact, since the announcement of the August poll, things have improved substantially for new Prime Minister Julia Gillard and her Labor Party. The boost in the polls is quite natural at this point, in part because of Gillard’s own positive approval ratings (currently at +19, with 23 undecided), and in part because the leader of the opposition Coalition, Tony Abbott ( of the Liberal Party, in an alliance with the National Party) , is nearly as unpopular as Rudd was (sitting on -15, with 13 undecided)*. 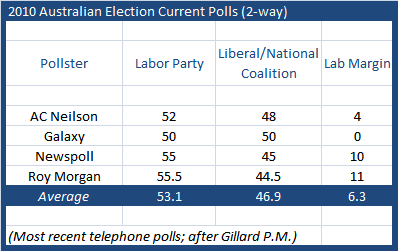 Australia uses the ‘Instant Run-off‘ form of voting to election Members of Parliament from 150 single-member districts across the country. In practical terms, this means that voters rank the available candidates in their district, in a fashion almost identical to the proposed Alternative Vote in the UK. If no candidate receives a majority of first choice votes, the candidate finishing last is eliminated and his or her votes distributed by the second-choice marked ( Voters must mark a preference for every candidate, or the vote is removed immediately). Candidates are removed and their votes redistributed until a candidate reaches a majority, at which point they are declared the winner.

Accordingly, polling for Australian parliamentary elections must account for not only the first choices of voters, but also preferences down the ballot. With different numbers of candidates running in different constituencies with varying ideological positions, however, and only a partial connection between national political alternatives and local MP choices, doing effective national level polling for Australia is a challenge.

In a similar challenge to the one we had for the UK election earlier this year, taking sporadic national level data — and we have even less for Australia than we did for the UK — and estimating what exactly will occur at the individual constituency level is quite tough.

However, the instant run-off system in Australia makes it fairly easy for pollsters to simply add a second line of questioning regarding their preferences among the top two parties or coalitions — the two who will in most cases end up pulling nearly all the votes after second, third and fourth choices have been factored in. 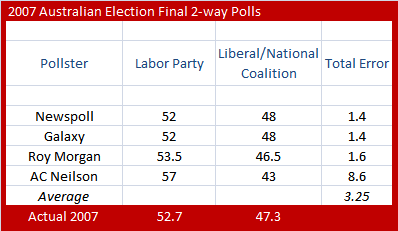 As a result, the pollsters (except for Neilson, who was quite far off) performed remarkably well on the final two-way numbers, with lower total errors than any pollsters from the UK, for example (the Brits had to account for three final parties rather than two, so we can discount the industry averages by 2/3, with the Aussies still performing better). I guess we should expect that the British polling industry will among those lobbying to adopt the Alternative Vote.

With a month to go in the election campaign, there is still plenty of opportunity for the Liberal/National coalition to pull back into the lead, a position they enjoyed briefly in the last few weeks of Rudd’s ill-fated Premiership. Prime Minister Gillard remains only partially defined, and with nearly a quarter of Australians unable to make a positive or negative decision about her, some serious negative campaigning could bring down her now strong approval ratings.

That said, Tony Abbott and the Coalition will have to simultaneously revitalize their own image, and recover from a period of near domination by Labor of the media’s election storyline, something that will be quite challenging to do alongside mudslinging political attacks. As a result, unless something dramatic occurs, we should expect to see Labor coast to victory.

* Approval ratings use the figures of The Australian’s pollster, Newspoll, who have been taking approval data since the mid 1980s.