As of 5 p.m. Monday, there were no new presidential polls out except for the two national tracking polls from Rasmussen Reports and Gallup. The Rasmussen numbers moved a tick toward President Obama, but it’s just not worth making much of a one-day shift in a tracking poll (a sustained shift over a week or longer would be more interesting).

At the same time, there were no important economic reports out, so it was basically a news-less day from the standpoint of our forecast, which was essentially unchanged.

But sometimes, the absence of news is news itself.

My offhand impression has been that the pace of presidential polling has been much slower than in 2008: that by this point in 2008, for instance, it would have been extremely unusual to not have any new state polls out on a given weekday, as happened on Monday.

It turns out that this is not just my imagination. I looked up the numbers — and the pace of polling has fallen quite dramatically from four years ago. 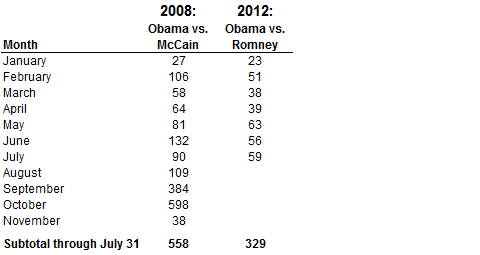 From January through July 2008, there were 558 state polls released that tested the Obama-McCain horse race. By contrast, there were only 329 through the same date this year — about a 40 percent decline.

Austerity at news media companies is undoubtedly a part of the problem. Polling isn’t free, nor is it particularly cheap — at least when it’s done well.

Indeed, polling is becoming more expensive because fewer people are picking up the phone and responding to surveys. You have to churn through a lot more calls to get the same number of completed interviews.

More Americans are not reachable on landlines at all. Failing to place phone calls to the roughly one-third of Americans who rely solely on cellphones is becoming less and less acceptable — but calls to cellphones add to the expense of polling.

And let’s face it: This election is simply much less interesting to the average consumer than 2008 was. So both the demand-side and the supply-side have been affected.

Another, smaller factor: A couple of polling companies that were fairly prolific in 2008, Strategic Vision and Research 2000, have failed to release any polls this year, probably because they are suspected — with solid evidence, in my view — of having falsified poll numbers. Still, even if you exclude data from those companies, there were 522 state polls released from January through July 2008 — considerably more than this year.

It’s not as though we have no idea about what’s going on in the election. The number of national polls hasn’t dropped off as much. And even if there have been “only” 300 or so state polls released so far this year, that’s still a fair amount of data.

But there are other ways in which the patchier data is more noticeable to election junkies and to polling analysts. We’ll sometimes go several weeks between polls even in key swing states, which makes it harder to detect shifts resulting from, say, a new burst of advertising in a state, or a new campaign strategy.

Granted, people tend to over-interpret changes in the state numbers. For the most part, you should be suspicious when there’s polling movement in one state that isn’t reflected in similar states, or in the national numbers. But this year, it takes a little longer to tell whether a poll is a part of a pattern, or an outlier.

And there is one whole group of states that have scarcely been polled. Pretty much every state that might be described as “solid Republican” has not been polled much if at all — with the odd exception of North Dakota, which gets polled a fair amount because of its competitive Senate race.

Sure, states like Texas and Georgia do not matter much to the electoral math. But they have fairly large populations, so the numbers there have a fair amount of effect on the popular vote. That, in turn, helps us to understand the relationship between state polls and national polls — which sometimes have seemed to tell different stories about the status of the campaign this year.

On the off-chance that Mr. Obama is competitive in a quirky red state like Alaska — and to be sure, those chances are extremely remote — we wouldn’t have any way of knowing it. There have been no polls in that state any time recently.

The good news is that the pace of state polling is almost certain to pick up after the party conventions. In 2008, there were 90 state polls released in July, and 109 in August — but that number exploded to 384 in September, and 598 in October.

We probably don’t need five new polls of Iowa or Colorado every week, as we were getting toward the end of 2008. At some point, one does encounter diminishing returns.

But instead of getting five polls in one week in Iowa, so far this year we’ve been getting only one poll there every five weeks. Our analysis of the race will become a lot more robust as the polling pace picks up.