It remains too early to tell exactly what effect the Republican National Convention has had on the polls. But television ratings are one measure that come in almost instantaneously. Ratings for the final two nights of the Republican convention were down quite a bit from 2008, declining by about 30 percent overall.

The ratings decline should not really be a surprise. Whereas, in 2008, Senator John McCain announced his running mate, Sarah Palin, just a few days before the convention, making her a national sensation, Mitt Romney rolled out his choice of Representative Paul D. Ryan three weeks ago, perhaps limiting the buildup to Tampa, Fla.

The convention was also shortened by, and had to compete with, Hurricane Isaac. And the security in and around Tampa was airtight, limiting protests and distractions — but perhaps also the spontaneity and newsworthiness of the event.

More important, this election has simply not generated the same excitement from viewers and voters than 2008 did. It would be quite surprising to me if the Democratic convention did not also experience a significant decline in its television ratings.

Nevertheless, television ratings may be of some value in predicting the size of the bounce a candidate gets from the convention in the polls.

In the chart below, I’ve compared the historical TV ratings for the challenging party’s convention against the bounce that its nominee received in the polls. Ratings are measured by the share of American households that were tuned into the convention during prime-time viewing hours. 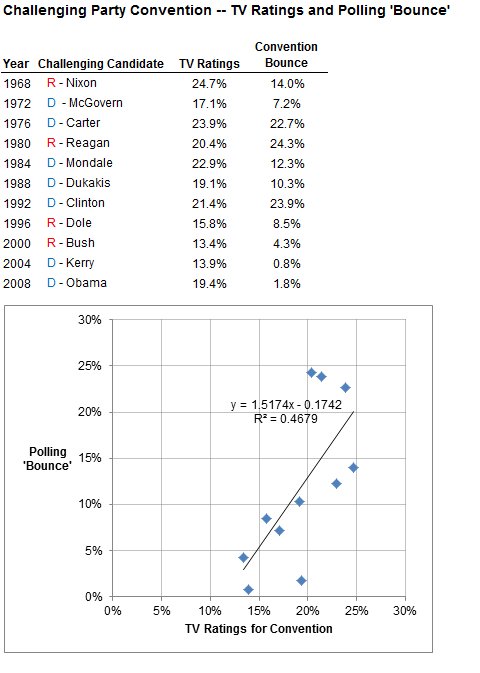 It’s hard to tell where the causation lies in this relationship. Do fewer voters switch their voting preferences because fewer of them watched the convention on television? Or do fewer voters feel the need to watch the convention in the first place if more of them have already made up their minds?

The Convention Bounce So Far

As for direct evidence of Mr. Romney’s convention bounce from the polls, the data is pretty incomplete so far.

The most optimistic number for Mr. Romney comes from Ipsos, which has been conducting an online tracking poll on behalf of Reuters. In that poll, which includes some interviews from after Mr. Romney’s acceptance speech on Thursday night, Mr. Romney now leads President Obama by one percentage point among likely voters — a five-point swing in the poll from the benchmark survey that Ipsos conducted before the convention, which had Mr. Romney trailing by four points.

The Rasmussen Reports tracking poll now has Mr. Romney ahead by one point, improved from a two-point deficit in the last poll it released before the convention. However, there are two caveats to this poll. First, very few of the interviews in the Rasmussen poll were conducted after Mr. Romney’s acceptance speech on Thursday night, which means that he’ll have the potential to gain more ground in the coming days. But second, the two-point lead that Rasmussen Reports had given to Mr. Obama before the convention was a bit unusual for them. The poll has had a Republican lean this cycle and has more often than not shown Mr. Romney ahead. So the movement toward Mr. Romney thus far could reflect reversion to the mean rather than any effects of the convention.

Finally, the Gallup national tracking poll shows Mr. Obama one point ahead: a fairly good result for him, since that poll has also had somewhat Republican-leaning results this cycle. But Gallup’s polling average is calculated over a seven-day window, which means that most of its interviews still predate the convention.

For the time being, I’m feeling pretty good about my guess that Mr. Romney’s bounce will come in somewhere in the neighborhood of four percentage points. It was a smartly scripted and competently executed convention (Clint Eastwood’s cameo aside) but also not one that packed a lot of excitement or surprise value. In other words, it felt pretty much par for the course given how conventions are run these days.

The forecast model has been a bit bullish on Mr. Obama’s chances lately. It now gives him a 72 percent chance of winning the Electoral College, his highest figure since Aug. 12. However, that mostly reflects some relatively favorable economic reports from among the economic data series that we track rather than anything having to do with the convention.