At FiveThirtyEight, we’re usually consumed by how much the polls disagree with one another, and where the race stands once you filter through all that noise. But every now and then, the pollsters make our job easy.

Over the past several days, there have been 15 national polls released. It looks like everybody has been trying to get numbers out as a baseline before the party conventions. And they tell a pretty consistent story.

On average between the 15 surveys, Mr. Obama leads by 1.6 percentage points. While there are some modest differences between them, pretty much every poll is within the margin of error of the others. 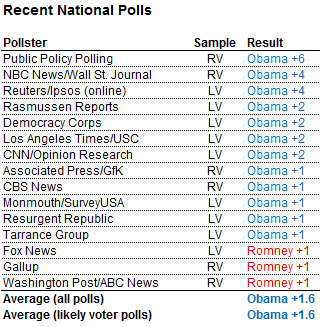 Enjoy this moment of relative consensus in the polls; it probably won’t last long.

To get a more controversial polling result, we instead have to turn toward Connecticut, where Quinnipiac released a poll on Tuesday showing a relatively close race. Quinnipiac had Mr. Obama by seven points in Connecticut, making this the third consecutive poll to show Mr. Romney within single digits there.

Our forecast model’s view is that these surveys slightly underrate Mr. Obama’s position in Connecticut; it projects that he’ll eventually win the state by 10 or 11 percentage points. Still, that would be a big drop-off from 2008, when he won the state by 22 points.

It’s not that hard to see how Mr. Romney could be overperforming in Connecticut. It has lots of wealthy voters who are employed in finance, particularly at private equity firms and hedge funds, industries that have become skeptical of Mr. Obama’s performance. Mr. Romney has raised more money than Mr. Obama in Connecticut, about $5.2 million in itemized contributions, against $3.5 million for the president.

Could Connecticut actually figure into the electoral math? It’s obviously not likely. The model gives Connecticut just a 0.2 percent chance (about 1 chance in 500) of being the tipping point state and casting the decisive votes in the Electoral College.

Still, it’s interesting to contemplate cases in which Republicans began to be more competitive again in the Northeast. In this hypothetical map, for example, the Republican candidate wins Connecticut, New Jersey and New Hampshire, enough to give him a winning map with 272 electoral votes, despite his losing most of the swing states in the West and the Midwest. 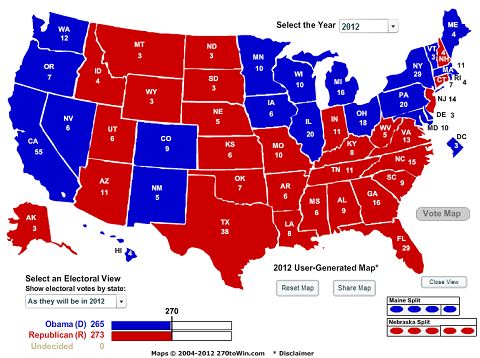 The odds are hundreds-to-one against a map like this coming to fruition this year. But it could be more plausible in 2016 if the Republicans nominated a relatively moderate candidate who downplayed social issues — positions that have turned off a lot of voters in states like Connecticut and New Jersey who might vote G.O.P. if they were going by their pocketbooks.

In the meantime, a relatively strong performance by Mr. Romney in Connecticut could help the Republican Senate candidate, Linda E. McMahon, to carry the state. She held a lead over her Democratic opponent, Representative Christopher S. Murphy, in the Quinnipiac poll.

Ms. McMahon did not wear well with voters over the course of the 2010 campaign, and she is fighting against a lot of partisan gravity in Connecticut, which hasn’t elected a Republican to the Senate since Lowell P. Weicker in 1982. But if Mr. Romney can keep the race within single digits, she’ll have a considerably better chance of holding on.