There wasn’t much in the way of polling data on Friday. The national tracking polls were released — Mitt Romney and Paul D. Ryan got a comparatively poor number in the Rasmussen Reports tracking poll, which had President Obama pulling into a one-point lead after having trailed in that survey for much of the past few weeks. And there was a new national survey from the firm Angus Reid, which conducts online polls. It had Mr. Romney ahead by four points — up from a tie in its poll last month.

Instead, the most interesting number of the day was this one: 13,275.20. That was the closing price of the Dow Jones industrial average, which left it just a few points shy of its highest close since the financial crisis. The stock market has gained ground for six consecutive weeks.

The change in another stock market index, the S.&P. 500, is one of the seven economic variables that our forecast uses to calibrate its estimate of economic conditions. Some of the other economic data series — like income growth and industrial production — have also been a bit stronger lately. But nothing has been as bullish as the stock market. The S.&P. 500 is now up almost 19 percent year over year. And it is up 76 percent since Mr. Obama took office on Jan. 20, 2009.

The reason for the inclusion of stock market in our economic index is not because I claim that it has all that much value unto itself. There are only a few voters who watch CNBC and check their portfolios every day.

Rather, it’s because the stock market has had power to predict the course of broader economic variables like gross domestic product.

Our model also includes a G.D.P. forecast as one of its economic variables — specifically the consensus forecast produced by the Wall Street Journal forecast panel. Those numbers are quite pessimistic, with most economists predicting economic growth of only about 2 percent over the next couple of quarters.

My research suggests, however, that when the stock market has improved significantly, the actual rate of G.D.P. growth tends to beat economists’ forecasts.

First, let’s look at how the economists’ forecasts of G.D.P. growth have done. Each economic quarter since 1968, the Survey of Professional Forecasters — which is now run by the Federal Reserve Bank of Philadelphia — publishes forecasts of G.D.P. and other variables. Like the Wall Street Journal panel, this is a consensus survey, so the forecasts of dozens of individual economists are averaged together.

The chart below compares the economists’ forecasts in the two forward-looking quarters — for example, the growth rate in the summer and fall as predicted by economists in the spring — against the actual value of G.D.P. 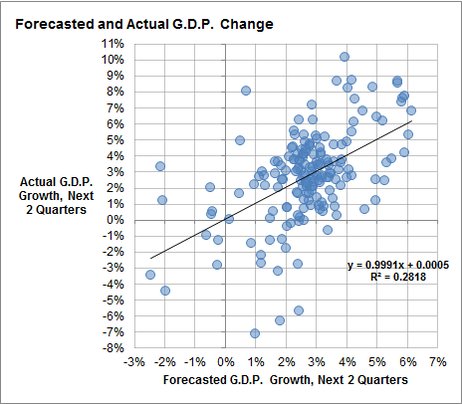 You can see that there is a positive relationship, although it is a fairly rough one. The consensus forecasts explain about 28 percent of the variance in the actual values for G.D.P., meaning that the other 72 percent of it is outside of our forecasting powers. And the margin of error on the forecasts has been about plus or minus 4.7 percentage points of G.D.P. What that means is, if the economy is forecast to grow by 2 percent, it could plausibly grow at almost a 7 percent rate, or shrink by 3 percent, instead.

The next chart considers the power of the stock market as a G.D.P. forecasting tool. I looked up the change in the S.&P. 500 index over the prior six months, and compared it with G.D.P. growth in the next two economic quarters.

(Specifically, the change in the S.&P. 500 index is calculated as of the middle of each economic quarter, since that is when the Survey of Professional Forecasters publishes its forecast, allowing for the most direct comparison between the two methods. So, for example, we’d be looking at how the six-month growth rate in the S.&P. 500 as of May 15, 1990 — the midpoint of the second economic quarter — predicted G.D.P. growth in the third and fourth quarters of 1990.)

This relationship is also quite rough — a little rougher than the economists’ forecasts. The change in the S.&P. 500 explains only about 13 percent of G.D.P. growth. 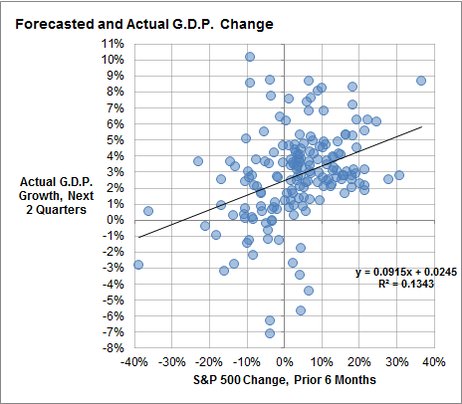 Nonetheless, the stock market has some forecasting power, even once economists’ forecasts of G.D.P. are already accounted for. That is, the two measures do a little better when taken together than either one taken alone. For whatever reason, the stock market seems to contain some useful information that economists are choosing not to incorporate into their forecasts.

This becomes clearest when, as is the case now, investors are bullish but economists are bearish.

In my database, I looked up the instances where economists predicted that G.D.P. growth would be 2.5 percent or lower — a bearish forecast — but the stock market had grown by 10 percent or more over the prior six months.

On average in these cases, G.D.P. growth turned out to be 3.6 percent — nearly twice the 2.0 percent rate predicted by the economists.

Nor was the discrepancy caused by one or two outlying cases. In 14 of the 15 instances where this condition occurred, G.D.P. growth beat the economists’ forecasts. 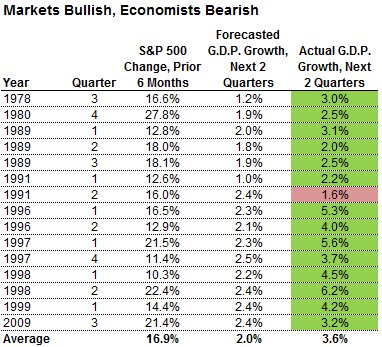 So even if you don’t own any stocks, and otherwise don’t care about Wall Street, it is at least something of a good sign for the broader economy when the stock market is growing. Economists and investors have different ways of thinking about the economy, and it looks as though both consider some useful information that the other group misses.

Our presidential forecasting model has a slightly more involved way to calculate stock market growth than what I’ve outlined here. It looks at the change in the S.&P. 500 over a variety of intervals up to one year, rather than over the past six months specifically. If you evaluate the stock market as our model does, and then combine it with economists’ forecasts of G.D.P., it would imply G.D.P. growth of 2.5 percent to 3 percent over the next two quarters, rather than 2 percent as from the economists’ forecasts alone.

The way the monthly jobs numbers have been interpreted by economic and political observers, 110,000 jobs per month would be considered a losing number for Mr. Obama and 165,000 a winning one.

It is ironic, given the occasional animus between Mr. Obama and Wall Street, that stock market prices are one of the better reasons to think the recovery could accelerate some in the next few months, making his re-election easier.