At the political futures market Intrade, shares in Mitt Romney have been a hot commodity this week. As of early Thursday evening, the bettors there gave Mr. Romney a 43.5 percent chance of winning November’s election. That’s up from about 39 percent late last week, before Mr. Romney’s announcement that Representative Paul D. Ryan of Wisconsin would be his running mate.

Our forecast model has usually been more bearish on Mr. Romney’s chances than Intrade — but it also shows him gaining ground over the past several days. It now gives him a 31.3 percent chance of winning the Electoral College, up from 26.7 percent late last week.

So what’s my gripe with Intrade?

The issue is simply this: in past elections, candidates have typically gotten a “bounce” in the polls after naming their running mates. When I use the term bounce, what I mean is that they get a temporary boost to their numbers which then fades. But while the bounce is under way, the polls will overrate their standing somewhat.

The forecast model is not making any sort of adjustment for the effect that naming a running mate could have on the polls. Neither, apparently, are the bettors at Intrade. But that may be a mistake.

What if we did include a vice-presidential bounce adjustment?

If so, it would probably be calculated as follows: since the average vice-presidential announcement has produced a four-point bounce in the polls, subtract four points from any poll conducted in between the naming of the running mate and the party convention. In order words, we’d subtract four points from Mr. Romney’s numbers in any poll conducted since he named Mr. Ryan on Saturday.

If I do that and run the model again, it has a rather pessimistic forecast for Mr. Romney — giving him just a 24 percent chance of winning the Electoral College, rather than 31.3 percent as in the official version.

The intuition behind this is simply that, under this theory, it’s a bad sign for Mr. Romney that Mr. Ryan has produced a below-average bounce so far. Among the polls that allow for a direct comparison, Mr. Romney has gained an average of about one percentage point since his selection of Mr. Ryan. 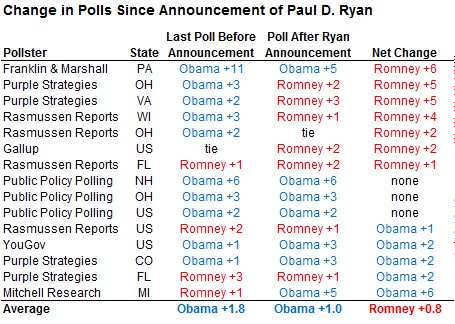 So which version of the model is right? I don’t know. Until recent years, vice-presidential nominees were often named at the conventions. In other cases, they were named just a few days before, leaving a very short window of time for polling to measure a potential vice-presidential bounce as something separate and distinct from the convention bounce itself.

There’s enough data to conclude that there probably is a vice-presidential bounce — but not enough, in my view, to know what sort of mathematical function you’d want to come up with to adjust for it, whether we might expect the bounce to be smaller or larger under different circumstances, and so forth. Any choice you make concerning the vice-presidential bounce is inherently going to be speculative.

Here at FiveThirtyEight, I have an easy way out of that dilemma. I can say “here’s what the model accounts for, and here’s what it doesn’t account for — and here’s the forecast conditional upon those assumptions.” If there’s a potentially important piece of context that our model is not accounting for, we can then discuss that separately.

If you’re putting down money on a forecast instead of publishing a statistical model, your task is both harder and easier in certain respects. On the one hand, you’re free to make a mental adjustment for some potentially important piece of context in your assessment of the odds, without having to articulate some sort of mathematical function to represent it. On the other hand, if you don’t make such an adjustment, other people in the market potentially will — and you’ll lose money to them if their hypothesis about it is right.

Personally, I don’t think there’s been much in the polling data this week that should substantially change your view of the race. Mr. Romney has certainly gotten some encouraging numbers this week, particularly in state-level polls. It’s surprising how much even a one-point shift in the polls can change the way that the race looks and feels.

But from what we can tell, most other candidates have gotten larger bounces after naming their running mates. My gut-level view is that these facts read slightly negatively for Mr. Romney on balance — but I’m not confident enough about it that I’d want to venture much money on that conclusion.

If I were making a bet this week, instead, the basis for it would be whatever hypothesis I had about the impact that Mr. Ryan will have on the race in the long term, which a few days of polling won’t tell us very much about. Or perhaps I’d look at the economic news, which has been slightly favorable to President Obama this week.

On Thursday, there were new polls in from Michigan, Florida, Pennsylvania — and perhaps most important, Wisconsin. Most of this data postdates the announcement of Mr. Ryan.

CNN’s poll of Wisconsin gave Mr. Obama a four-point lead there; this is CNN’s first poll of the state, so there are no trendlines for comparison. This poll, however, is worse for Mr. Obama than it looks. It was a survey of registered voters, not likely voters, and registered voter polls typically exaggerate the Democratic candidate’s standing by about two percentage points.

The Rasmussen Reports poll of Wisconsin, which was conducted among likely voters, had Mr. Romney one percentage point ahead instead. But this one requires an asterisk, too. Although Rasmussen Reports polls are almost always a bit Republican-leaning, that’s been especially true in Wisconsin, where they’ve normally had numbers that are three or four points more favorable to Mr. Romney than the average of other polling firms that were conducting surveys there at the same time.

Adjust the Rasmussen numbers upward for Mr. Obama, and the CNN poll downward for him, and it looks as though Mr. Obama might win by about two percentage points if an election were held in Wisconsin today. I wouldn’t quite use the term “tossup” to describe the state — particularly if Mr. Romney and Mr. Ryan are in the midst of a modest but temporary bounce — but it has become much more essential to the electoral math, and now rates as the fourth most important state in our tipping-point calculus, behind Ohio, Virginia and Florida.

Rasmussen Reports also gave Mr. Romney a two-point lead in Florida, making this the second consecutive poll to show him ahead there. Both polling firms had also shown Mr. Romney with a lead before the announcement of Mr. Ryan, but there’s certainly not much evidence yet for the idea that Mr. Ryan will somehow be especially damaging to Mr. Romney there.

The Michigan and Pennsylvania polls were complements to each other in an odd way. In Pennsylvania, a poll from Franklin & Marshall College put Mr. Obama five points ahead there — not a terrible number for him, but poor as compared to their prior survey of the state, which had him up by 11. Mr. Obama also had a five-point lead in a Mitchell Research poll of Michigan — not a great number for him, but better as compared to their survey in July, which had given Mr. Romney a one-point lead instead.

Looking at the trendlines in polls is important — but in the case of the prior Franklin & Marshall poll of Pennsylvania and the previous Mitchell Research poll of Michigan, their numbers had been modest outliers relative to the consensus in those states. So we may be seeing reversion to the mean as much as any actual movement. Nevertheless, Michigan’s ranking declined on our list of tipping-point states; it was displaced in the top 10 by North Carolina.