This is a another two-for-one column. We’ll give you our daily breakdown of the horse-race polls and economic data that came out on Monday. Then, we’ll take a quick look at overnight polls that took the temperature of Mitt Romney’s new running mate, Representative Paul D. Ryan of Wisconsin.

In Missouri, a new SurveyUSA poll put Mr. Romney just one point ahead of President Obama, with 45 percent of the vote to 44 percent.

This is a fairly poor number for Mr. Romney — who had led in our Missouri forecast by six percentage points previously — but not quite as bad as it looks. This is SurveyUSA’s first poll of Missouri so far this cycle, but its polls in other states have been a bit Democratic-leaning relative to the consensus. Perhaps more important, Missouri is no longer a state that plays a critical role in the electoral math. Mr. Romney could lose it. (His chances of doing so rose to 18 percent from 15 percent on the new survey.) But he had a reasonably big cushion there from previous polling, and the state will probably only flip to Mr. Obama in the event that he is winning the Electoral College decisively.

The only potential worry for Mr. Romney is that about half of the interviews in the SurveyUSA poll were conducted after his selection of Mr. Ryan — but since there are no trendlines for comparison, I don’t think we can read too much into that.

Mr. Romney got a better number in a national poll by George Washington University for Politico, which put him one point behind Mr. Obama in the national race. But just as I’m not sure the Missouri poll is that big a deal for Mr. Obama, I don’t know that this one is something for Mr. Romney to get too excited about. If you bought into the notion that Mr. Obama was seven or eight points ahead in the national race, as a few polls indicated last week, then this should give you a reality check. However, our model’s calculations suggested there was ample reason to be skeptical of those polls, and Mr. Obama’s lead over Mr. Romney is likely in the neighborhood of two to three points instead. As compared to that baseline, this is an O.K. poll for Mr. Romney, but not a great one.

Finally, a new poll of New Hampshire, from the University of New Hampshire on behalf of WMUR-TV, an ABC affiliate, gave Mr. Obama a three-point lead there. That’s a tick down from their prior poll of the state, when he was up by four points instead. On the other hand, New Hampshire hadn’t been polled in some time, and this poll is suggestive that Mr. Obama still holds the lead there. Overall, the survey was very consistent with the forecast that the model was already making in New Hampshire; Mr. Obama’s chances of winning the state were roughly unchanged, declining to 72 percent from 73 percent.

A Lull in the Economic News

With all the focus on Mr. Ryan, has everyone forgotten about the economy? We haven’t talked much about it much lately, in part because not one of the reports that our forecast uses to measure the economy had been updated recently — except for the stock market, which has been uncharacteristically steady. (The VIX index, which measures the expected volatility in the stock market, is close to a five-year low.)

But on Monday, The Wall Street Journal came out with its new panel survey of economic forecasts; we use the panel’s gross domestic product projections as part of our economic index. Those G.D.P. forecasts were lowered by about two-tenths of a percentage point in forward-looking economic quarters and now project growth of about 2 percent for the next six to nine months, about what it has been in the recent past.

Still, the overall polling and economic picture is basically unchanged. Mr. Obama’s chances of winning the Electoral College were 71.4 percent in Monday’s forecast, as compared with 71.6 percent on Saturday.

Only a smattering of the horse-race data was conducted after Mr. Romney’s announcement of his vice-presidential pick. The SurveyUSA poll of Missouri was one partial exception, but as I mentioned, I don’t know that too much should be inferred from it. The national tracking polls also had some of their interviews conducted after the vice-presidential announcement, but they haven’t moved much. The race remained tied in the Gallup poll, and Mr. Romney’s lead increased to three points from two in the Rasmussen Reports tracker.

However, a few polls were released that were dedicated to Mr. Ryan specifically, and they offered mediocre numbers for the Republican ticket.

An ABC News/Washington Post poll, conducted after Mr. Romney’s announcement, found that 38 percent of Americans had a favorable view of Mr. Ryan, and 33 percent had an unfavorable one.

The good news for Mr. Romney and Mr. Ryan is that those numbers were improved from polling that ABC News conducted just before the announcement, when 23 percent of adults had a favorable impression of Mr. Ryan and 33 percent an unfavorable one.

But that is countered by two pieces of bad news. First, Mr. Ryan’s numbers are middling to poor by the standard of other recent vice-presidential selections. And second, the period immediately after a vice-presidential announcement has often been a high-water mark for the new candidate. More often than not, the candidate’s unfavorable numbers increase more than his or her favorables from that point forward.

In the table below, I’ve provided average favorability ratings for recent vice-presidential selections, as compiled from the Web site PollingReport.com.

There are three sets of numbers in the chart. The left-hand columns show the candidate’s numbers before the vice-presidential announcement, based on an average of polls conducted at an earlier point during that election year. Unfortunately, we could only find data on pre-announcement polling for two candidates, Joe Biden in 2008 and John Edwards in 2004.

The middle columns reflect an average of surveys in the two weeks immediately after the running-mate announcement. Finally, the right-hand columns show an average of polls from October and November, just before the election. 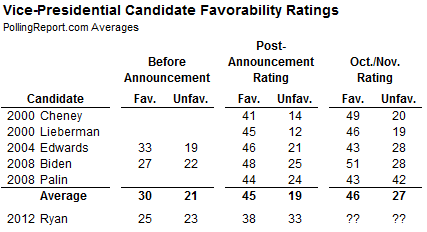 By October and November, these candidates’ numbers had declined somewhat on balance. Their favorability rating increased just slightly, to 46 percent from 45 percent. But their unfavorables rose more, to 27 percent from 19 percent.

If, hypothetically, the change in Mr. Ryan’s numbers matched the historical pattern, that would give him a 40 percent favorable rating but a 41 percent unfavorable rating by Election Day. That would make his numbers similar to Sarah Palin’s numbers in late 2008. (Ms. Palin is sometimes remembered as having substantially negative favorability ratings in 2008, but they were actually close to break-even; her numbers did not consistently turn negative until after the election.)

But what about the improvement that the ABC News poll showed for Mr. Ryan? From what I can tell, this also seems to be a common feature of the immediate post-announcement period. Although we have only two data points for comparison, both Mr. Biden in 2008 and Mr. Edwards in 2004 also polled much better immediately after their rollout than they had earlier in those years.

In other words, the numbers during a candidate’s rollout seem to be better than those either before or after his or her honeymoon period.

I also looked up favorability numbers for vice-presidential candidates dating back to 1980 from the CBS News polling database. (Many CBS News polls were conducted in conjunction with The New York Times.) A word of caution: The favorability polls conducted by CBS News and The New York Times are a little bit different than those of other polling firms. The difference is that CBS News and The New York Times actively encourage respondents to say that they have an undecided view of a candidate, or don’t know enough about the candidate to have formulated an opinion. This tends to make both a candidate’s favorable and unfavorable ratings lower than in polls conducted by other news organizations. I personally like this approach — some other polling firms are asking voters for their opinions of candidates they know next to nothing about — but it does mean that the CBS News polls cannot always be compared directly to those of other polling firms. 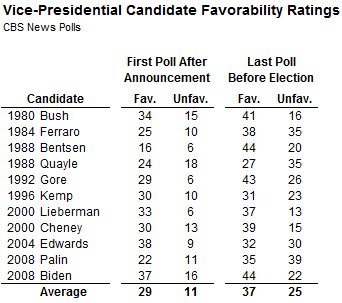 So we’re getting the same story as from the broader average of surveys: after an initial burst of enthusiasm for the candidate, more of the voters who begin to weigh in on him or her do so with negative views.

A USA Today/Gallup survey posed a slightly different question to voters, asking them what they thought of Mr. Romney’s choice of Mr. Ryan, rather than about Mr. Ryan directly. In that poll, 39 percent of voters rated the choice as “excellent” or “pretty good,” while 42 percent called it “fair” or “poor.”

These are underwhelming numbers by the standards of this particular question, which Gallup has asked periodically since 1988. The scores for Mr. Romney and Mr. Ryan are a bit worse than those for John McCain and Mrs. Palin in 2008, and just slightly better than those for George H.W. Bush and Mr. Quayle in 1988 — two of the more poorly regarded vice-presidential choices of recent years.

Still, voter preferences on Mr. Ryan are not all that firm yet. Historically, the correlation between a candidate’s initial ratings and those he or she eventually winds up with has only been moderate. Mr. Edwards started out with quite strong favorability ratings when he was announced in 2004, for instance, but they were mediocre by Election Day. Hardly anyone initially had a view of Lloyd Bentsen in 1988, but he wound up being a reasonably well-regarded vice-presidential choice. The battle to define Mr. Ryan has only just begun.

Personally, however, I think the smart money is on Mr. Ryan’s polling remaining mediocre throughout this election cycle. He articulates his ideas well, but with a somewhat intellectual timbre that might appeal more to high-information voters than those who are less invested in politics and are more likely to be undecided in the race. And he has inherently something of a tough sell, since his policy preferences are reasonably far removed from those of the median voter. Mr. Ryan is also on the young side for a vice-presidential choice, and lacks foreign policy experience, so he may have more work to do than the average candidate in demonstrating his credentials.

Instead, this was a strategic choice by Mr. Romney: an effort to reorient the election toward battle of ideas rather than a personality contest. This was not a pick designed to win over focus groups.

It may be a smart strategy for Mr. Romney or a poor one. My reaction to it has become more tepid as I have read accounts of how the choice was made. The pick of Mr. Ryan seems to have been more a “gut-feel” decision than a data-driven one, and I think the evidence suggests that such a process is more likely to lead to mistakes under conditions of substantial uncertainty.

But whether it turns out well or poorly, we should not expect Mr. Ryan to accomplish something that the choice wasn’t designed for, any more than a team that drafts a speedy, slap-hitting center fielder should expect him to miraculously start hitting home runs. If Mr. Romney wanted the candidate with the maximal favorability rating 48 hours after his rollout, he could have gone in another direction with his pick.