No pitcher’s elbow seems safe anymore. Earlier in spring training, Yu Darvish, the perennial Cy Young contender and ace of the Texas Rangers staff, had Tommy John surgery. A week later, promising Mets pitcher Zach Wheeler was under the knife. Those guys are part of a proud lineage of phenoms whose elbows couldn’t withstand the crazy forces of pitching a baseball every five days. In the past five years, 299 major and minor league pitchers have had Tommy John surgery.1 The epidemic — or whatever you want to call it — isn’t over yet.

But beneath the scary headlines and the relentless drumbeat of crisis, there’s a silver lining to this rash of pitcher injuries: Having a bum elbow sure beats having a bum shoulder. Despite all the Tommy John surgeries, we’re living in a golden era of pitcher health.

It’s hard not to be anxious about a crisis when you look at data about just how many ulnar collateral ligaments are being repaired through Tommy John surgery. The number of surgeries in the past 10 years is 115 percent higher than it was the 10 years prior.

That’s a huge spike, yes, but the intriguing thing is what’s happened as those elbows have flared up: Shoulders haven’t. Using data from Baseball Prospectus’s injury archive (maintained by Corey Dawkins), we can chart the escalating number of elbow surgeries over the past 35 years against the number of shoulder surgeries2: Right around 1998, the two paths diverge, and in recent years, shoulder surgeries are down.3 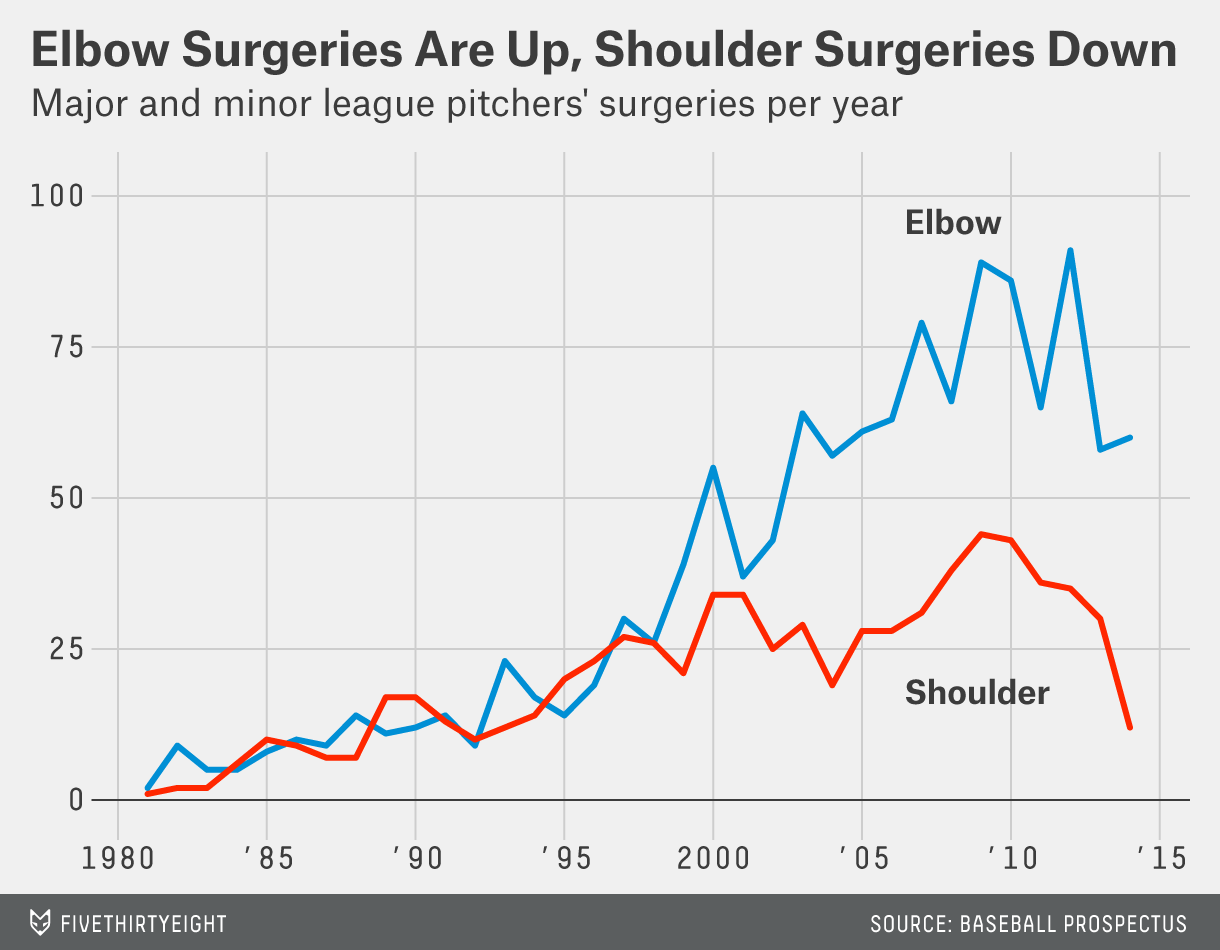 After a peak in 2009, when more than 40 operations were performed, shoulder surgeries seem to be fading toward extinction, with only 12 in 2014. Some have attributed the decrease in shoulder injuries to improved shoulder exercises. This explanation is consistent with the fact that shoulder injuries have disappeared for position players, as well.

The decreasing trend in shoulder problems matters because shoulder surgeries are more debilitating than the now-routine Tommy John. Whereas about 80 percent of major league pitchers in my data set4 returned from UCL reconstruction to pitch in the majors, only 67 percent came back from shoulder surgeries. (From here on out, I’m examining only the pitchers who were major leaguers at the time of their surgery.) Whether because of recency bias or some other factor, we tend to forget once-great throwers like Johan Santana, Brandon Webb, and Kerry Wood, all of whose careers were cut short because of shoulder ailments. Wood, in particular, is an instructive example. He came back from Tommy John early in his career only to be done in by a rotator cuff surgery several years later.

There are, of course, pitchers who never make it back from Tommy John, and if you are a Rangers fan, or simply a connoisseur of great pitching (as I am), even a 20 percent risk of Darvish never returning seems drastically high. But not all pitchers are the same. Using logistic regression, I examined how the risk of failing to return after UCL reconstruction varies by the characteristics of the specific pitcher in question.

Starting pitchers are more likely to make it back than relievers, for example. I found that 90 percent of starters returned from Tommy John surgery, versus 74 percent of relievers. In addition, the better a pitcher is before his stint on the DL (measured by his strikeouts and walks per nine innings), the more likely he is to recover.

How healthy that pitcher is before his surgery also matters. The longer the injury history, the less likely he is to successfully recuperate. All parts of a pitcher’s arm are connected in a kinetic chain. Because the pitching motion is so stressful on an arm, a problem at one end of the chain can weaken another end of it. Take Joel Zumaya, the fire-breathing reliever for the 2006 Detroit Tigers who never made it back from Tommy John. Zumaya had a long injury history, including problems in his hand, wrist, elbow and shoulder. No one can say with certainty which part of his arm was the one that ruined his chances of being a major league pitcher. Darvish, on the other hand, is a relatively healthy starting pitcher with excellent strikeout and walk numbers. He should be counted as among the most likely to make it back to MLB.

There’s a pessimism that follows any pitcher to the DL — that even if he does return, he will never attain his former abilities again. There’s some merit to that: While many pitchers return to their former levels of performance, some seem to lose a measure of their ability. Francisco Liriano never again matched the 10.7 strikeouts per nine innings he put up in his rookie season, which was followed by elbow surgery. But for every Liriano, there’s an Adam Wainwright, the Cardinals ace. He averaged 8.3 K/9 in the year before his surgery and posted an identical 8.3 K/9 the year after.

When I looked more generally at the historical record of pitchers who had undergone Tommy John, I found that there was an evident decline in their performance. However, it was not nearly as bad as the one that followed shoulder surgeries. Shoulder problems reduce strikeouts and increase walks, both to greater degrees than similarly severe problems to a pitcher’s elbow:

There’s one other noticeable effect of these surgeries: Pitchers pitch less when they come back. Both types of pitcher injuries seem to lead to a decrease in innings pitched in the three years after the surgery relative to the years before. But, again, shoulder surgeries appear to be worse than elbow surgeries.

Pitchers who underwent UCL reconstruction saw their number of innings pitched decline by an average of about 53 innings in the three years following their return — no small margin. In contrast, pitchers who underwent shoulder surgery experienced a much greater decrease, notching more than 134 fewer innings.

All this means that there are tons of players getting Tommy John surgery, but that’s not the worst fate for a pitcher these days. Darvish is very likely to return, likely to strike out nearly as many guys per game as he once did, but likely to do it in fewer innings. Rangers fans, you can stop worrying about Darvish’s elbow. Just keep praying his shoulder holds up.