We can always be certain of a few things about the Masters Tournament, which starts Thursday at the Augusta National Golf Club: The azaleas will be in bloom. The course will be pristine. The post-tournament sit-down in Butler Cabin will be awkward. But who will win? Let’s see which factors, if any, correlate with success under the Georgia pines.

Full disclosure: Attempting to forecast the outcome of any single golf tournament is, in many ways, a fool’s errand. The PGA Tour’s leading winner in each season since 19801 has averaged 4.6 victories in 21 events, a rate of just under 22 percent. Even Tiger Woods, who may be the greatest golfer of all time, has won only 26 percent of the tournaments he’s entered. The field regularly beats the best golfers in the world, and this is especially true in the tiny sample of a four-round tournament.

Complicating matters, the Masters (one of the more prestigious of the four majors) has seen plenty of fluke winners in recent years, at least based on their perceived status the year before they won the tournament. Going back to 2003, the earliest year for which the PGA Tour website has end-of-year Official World Golf Ranking data, only U.S. Open winners have a lower end-of-year OWGR point average2 than Masters champions in the season before their major victory.3 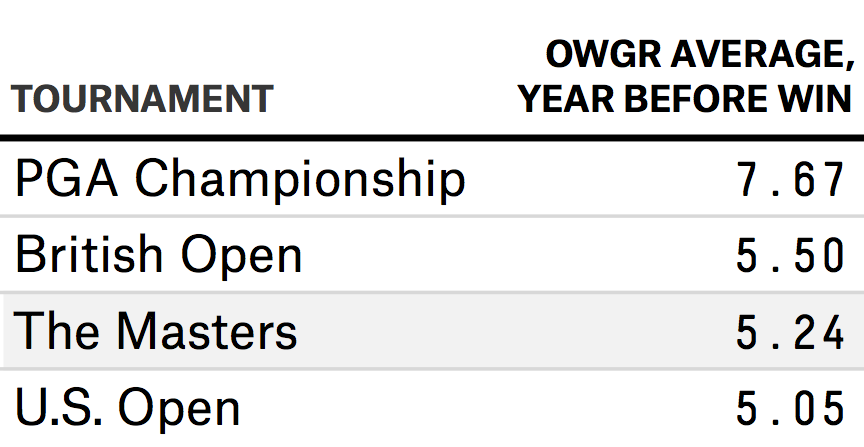 But despite the inherent uncertainty of golf and especially the Masters, some numbers emerge as predictors of success at Augusta. Specifically, long hitters appear to have an advantage — and pure ball-strikers less so — than would be expected from their performance across all tournaments.

To isolate those predictive factors, I borrowed a technique I first used for last year’s NCAA Giant Killers project at ESPN.com. The idea is to start with a base rating for each player that loosely represents his talent level relative to others’ in the field. Then I look for discrepancies between what that measurement predicted and what happened, and try to determine whether those gaps are related to a particular attribute of a player’s game.

For my look at the Masters, I’m using the PGA Tour’s adjusted scoring average metric, which compares players’ per-round scores with the field averages in the tournaments they played. Other metrics almost certainly do a better job of explaining player talent, including the OWGR4 and Jeff Sagarin’s Golfweek ratings, but adjusted scoring average has the advantage of being available back to 1980 at the PGA Tour’s website.5

A player’s adjusted scoring average from the previous year6 provides a baseline from which a generic Masters prediction can be created. Moving to the next level and searching for meaningful player traits, though, means looking at the PGA Tour’s traditional skill statistics — average driving distance, driving accuracy percentage, greens in regulation percentage, putts per round7 and sand save percentage — all of which have also been recorded since 1980.

Comparing these metrics with areas where our generic predictions went wrong can tell us which types of players could expect an extra boost at Augusta, beyond what we know purely from their adjusted scoring averages.

Let’s start with the metrics that don’t significantly change our expectations after accounting for scoring average. A player’s driving accuracy, for instance, isn’t much of a weapon in the Masters. In fact, the average green jacket winner since 1980 has hit fairways at a rate 1.6 percentage points below the tour average in the preceding season. Straight drives are never a bad thing, but this finding indicates that they are no more important at Augusta than on the typical PGA Tour setup.

Getting up and down out of bunkers apparently doesn’t make much difference at the Masters, either. Sand saves are far from the only shots a player must worry about around the green, but they also correlate moderately well with another short-game statistic known as “scrambling,” which measures the rate at which a player misses the green but still saves par. The trouble with these barometers is that they vary wildly from year to year, largely because of sample size issues (there are only so many greenside bunkers you can hit out of each season). This may play into the seeming lack of importance — we can’t predict who will be good at the short-game stats in any given season.

And for all of the breathless reverence given to Augusta’s trademark slippery greens, putting skill isn’t a significant predictor of those who will stray from expectations, either.

I suspect this is because putts per round is one of the least consistent performance indicators from season to season, ranking only above sand save percentage. If we look at correlations to Masters performance using stats from the season in question, putting looks like one of the strongest indicators, but it loses all predictive power when we use the previous season’s stats. In other words, if we knew who was going to be good at putting this season, it would be a valuable piece of forecasting information. But because we don’t, it isn’t.8

So what does matter when predicting whose Augusta performance will exceed expectations? The only two skill statistics I found to be significant were average driving distance and the percentage of greens hit in regulation. Neither effect was huge, but you can see them come into play in recent Masters outcomes.

First, driving distance. For every 17 additional yards per drive a player hit above the PGA Tour average in the previous season, he could expect to exceed his basic 72-hole Masters results by one stroke. A whole stroke is a pretty big deal; it can often mean the difference between winning and losing the tournament. And though few players vary so much from average that they lose or gain that full shot, the game’s longest hitters come close, which is one reason why this factor has been part of some big statistical surprises over the past few seasons.

To wit: When Phil Mickelson won in 2010, he was coming off a down year, ranking outside the top 25 in adjusted scoring average for only the second time in his previous 11 seasons. But he still maintained a driving average 12.1 yards greater than average. Likewise, Bubba Watson’s 2012 victory was presaged more by his staggering 23.7 yards of driving distance above average than by 65th-ranked scoring average in 2010. And Angel Cabrera, the tour’s 22nd-longest hitter in 2012, nearly won the 2013 Masters (falling to Adam Scott in a playoff) despite ranking 161st in scoring average a year earlier.

By contrast, 17 of the 25 most disappointing Masters performances since 1980 (compared with the expectation generated by adjusted scoring average) belonged to below-average power hitters off the tee. Golf fans will recall that the golf club’s “Tiger-proofing” renovations in the early-to-mid-2000s9 raised concern that short hitters would be squeezed out of contention. But the data shows that short hitters have paid a price at Augusta going back to the days of Calvin Peete and Jeff Sluman in the 1980s and ’90s.

The percentage of greens hit in regulation is a different story. It turns out that, after controlling for the amount of power in a player’s game, hitting a lot of greens the year before the Masters suggests a downturn in expected performance at Augusta.10 For every 11.9 points of greens in regulation (GIR) percentage above average that a player shot in the preceding season, his 72-hole Masters score tended to increase by one stroke relative to what we’d expect from his adjusted scoring average.

This could be attributable to the peculiarities of Augusta, which, while just the 22nd-longest course on tour, plays longer than its yardage because of the numerous elevated greens. Lightning-quick and frequently armed with so-called false fronts, Augusta’s putting surfaces are ideally attacked using short irons with more degrees of loft, an option not always afforded to short drivers.

Whatever the reason, at the Masters, disappointment from short-hitting iron specialists is the real tradition unlike any other.

Peete is the archetype here, having finished no higher than a tie for 11th — and falling outside the top 20 five times — over the eight Augusta cuts he made back to 1980. And yet he led the PGA Tour in adjusted scoring in 1984 on the heels of back-to-back second-place finishes in 1982 and ’83 (he’d also finish sixth in 1985 and seventh in ’86). His driving accuracy and GIR percentages were unparalleled, but he routinely finished 150th or worse in driving distance, lagging 10 to 12 yards per drive behind his peers. The statistics say that’s a bad combination for someone hoping to win the green jacket.

In this year’s field, these factors favor players such as Jason Day, who ranks eighth in Vegas’ 2014 Masters futures (a 25-1 shot) but receives a 0.7-stroke boost to his base rating in my system because he hits the ball hard (11.3 yards above average per drive last season) and isn’t overly reliant on iron play. The same goes for Dustin Johnson, who crushed the ball 17.8 yards above average per drive in 2013 and had a good-but-not-great GIR percentage. And Rory McIlroy’s playing style fits that description as well.

The same numbers cut against Steve Stricker, a well-below-average power hitter who relies heavily on approach accuracy. There’s a reason he’s cracked the top 10 only twice at Augusta despite five top-four scoring average seasons in the past seven years. His game might not be built for the Masters, something that can also be said of Henrik Stenson, who led the tour in GIR percentage last season but has yet to enjoy a Masters breakthrough (his best finish at Augusta was a tie for 17th in 2008).

Even so, after taking into account individual playing styles that match Augusta’s tendencies, the most any player’s rating moved was one stroke in either direction (Jim Furyk was docked that much for his combination of short hitting off the tee and dependence on iron play for scoring). And Stricker and Stenson continue to rank among the top contenders, because playing generally good golf dwarfs the importance of any Augusta-specific characteristics.

After the dust settled, here are the favorites according to my simple model: 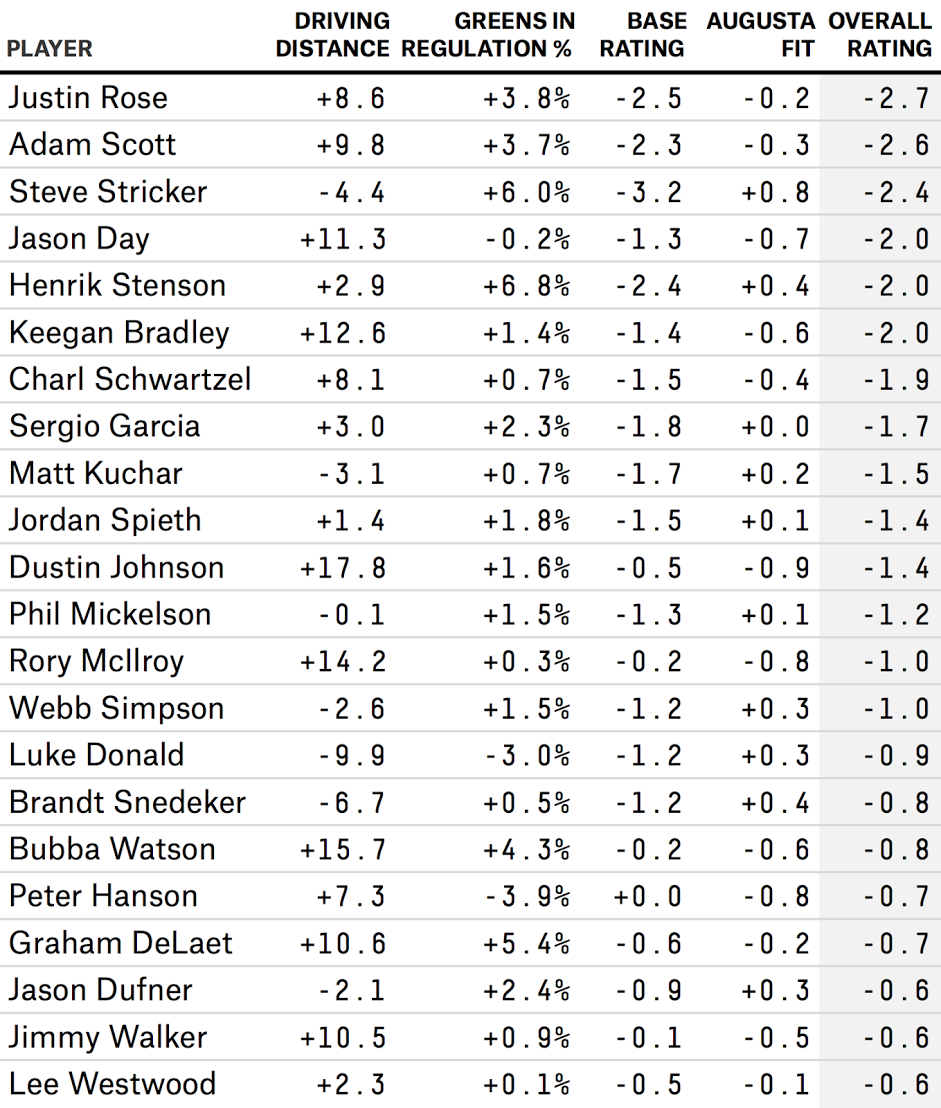 Again, there are no guarantees in the world of golf forecasting. But the general factors associated with over- or under-performance at Augusta are worth keeping an eye on when you watch the Masters.