Don’t have a lot of time to write today, so we’ll hope that whole picture-is-worth-a-thousand-words thing is true after all: 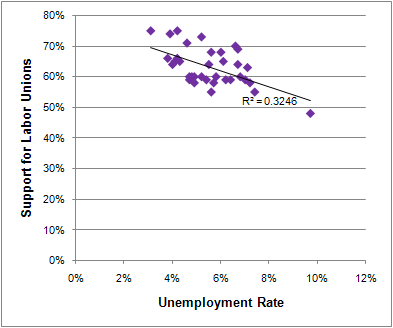 On the horizontal axis, we have the civilian unemployment rate; on the vertical axis, we have the number of people who approve of labor unions, in 35 distinct Gallup surveys going back to 1948. There is a moderately strong relationship between these two things, as you can see.

Gallup recently found sympathy toward labor unions is at an all-time low, at 48 percent. but then again, unemployment is close to its post-WWII highs. Gallup did not happen to ask this question in late 1982 or early 1983, when unemployment exceeded 10 percent. They did ask in August 1981, when unemployment was up to 7.4 percent and rising rapidly, and at that point support for labor was at 55 percent, which was the lowest figure it had achieved before this year’s survey.

The regression line finds that, for every point’s worth of increase in the unemployment rate, approval of labor unions goes down by 2.6 points. Alternatively, we can add a time trend to the regression model, to account for the fact that participation in labor unions has been declining over time. This softens the relationship slightly, but still implies a decrease in approval of 2.1 points for unions for every point increase in unemployment. Both relationships are highly statistically significant.