The Texas Legislature began a second special session on Monday to again take up a bill that would, among other provisions, ban abortions in Texas after 20 weeks of gestation. The bill failed in a previous special session after State Senator Wendy Davis stood for roughly 11 hours in a filibuster that brought national attention to the fight.

The Texas bill is still expected to become law, however. And Ms. Davis’s filibuster came several days after Republicans in the United States House of Representatives succeeded in passing a similar ban (though that bill has virtually no chance of being taken up in the Senate). And since 2010, 12 other states with Republican-led Legislatures have passed bills that ban abortions after 20 weeks (many of those laws are being challenged in court as unconstitutional).

Discussions of women’s reproductive health have proved politically problematic for Republicans in recent years, but public opinion shows that Republican legislators pushing 20-week bans may be on safer political footing.

While polls have consistently found that a majority of Americans support a right to an abortion in all or most circumstances, surveys also show that support for abortion narrows further into a pregnancy.

A United Technologies/National Journal Congressional Connection poll released last Wednesday found the public almost evenly split on a 20-week ban: 48 percent of respondents said they would support legislation that banned “virtually all abortions nationwide after 20 weeks of pregnancy, except in cases of rape and incest that are reported to authorities.” Forty-four percent would oppose such a bill. 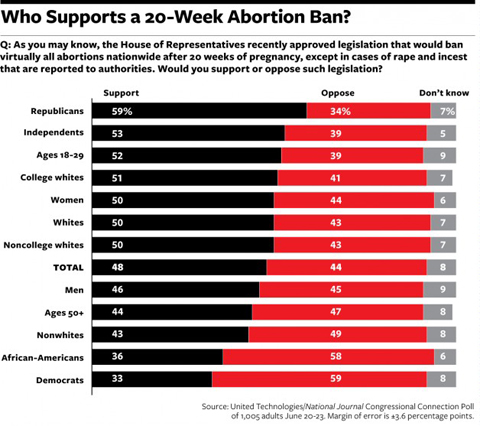 Few other polls have asked specifically about a 20-week threshold, but Gallup has done surveys gauging support for abortion by trimester and has found largely the same result since it began asking the question in 1996: A clear majority of Americans favor legal abortion in the first trimester, but that support drops precipitously in the second trimester and even further in the third.

Of course, the second trimester stretches several weeks past the 20-week threshold, making it an inexact barometer for gauging support for the recent Republican legislation. And in the United States, few abortions actually occur late in a pregnancy. According to the Guttmacher Institute, a nonpartisan nonprofit research group, 9 in 10 abortions occur within the first 12 weeks of pregnancy and just 1.5 percent of abortions take place after 20 weeks. These late-term abortions are also performed when the health of the mother is at risk, an exception that polls show that most Americans support.