On the heels of last week’s retirement announcements by Senators Chris Dodd and Bryon Dorgan, and Colorado Governor Bill Ritter, it’s natural to wonder which other Democrats might follow them into the Great Cloak Room in the Sky. And few Democrats are more vulnerable than Senate Majority Leader Harry Reid.

It appeared for a while as though Reid, although his approval ratings have been challenging for some time, might avoid having to face a serious Republican opponent. And indeed, the candidates whom the Republicans have mustered up aren’t much: a former state senator on the one hand (Sue Lowden), and son of a famous basketball coach (Danny Tarkanian) on the other, who has never held elected office. Nevertheless, Reid has trailed both Lowden and Tarkanian in every poll, although almost always by single-digit margins.

The weakness of the Republican candidates, along with more than $8 million in the bank, an extremely unpopular Republican incumbent governor, and control of the machine in a machine state, are what might allow Reid to keep the race competitive. But increasingly it seems as though his chances of a victory might hinge upon a significant gaffe or scandal on the part of Lowden or Tarkanian. There is a nontrivial chance of something like this happening; Lowden and Tarkanian are inexperienced campaigners, Nevada is a state where more politicians than not have skeletons in the closet, and $8 million pays for a lot of opposition research.

However, after revelations surfaced this weekend that Reid made impolitic remarks in 2008 concerning Barack Obama’s skin tone, Reid’s position has become more tenuous. Although Republicans may yet manage to minimize the cost of the gaffe through tone-deaf remarks of their own, the fact remains that Reid cannot withstand any erosion of support within the African-American community, which constitutes 10 percent of the electorate in Nevada and heretofore had been of his few remaining reservoirs of support. A September poll for Daily Kos by Research 2000, for example, showed Reid leading Tarkanian 74-5 among black voters, even while trailing him 40-45 overall. If, hypothetically, 10 percent of the black voters in that poll switched from Reid to Tarkanian as a result of his remarks, and another 20 percent decided not to vote, that would expand Tarkanian’s lead to 47-38, a 9-point margin.

Are those pessimistic assumptions? I have no way in particular to know. But Reid’s remarks have received a generally unsympathetic reaction among black political bloggers, even at the same time that black political leaders have been tripping over themselves to defend him. And as someone whose best-case scenario probably involved cobbling together 51-53 percent of the electorate, turning off even a small fraction of black voters could be highly injurious.

Reid’s problems, however, predated his remarks about “Negro dialect”, as well as the increasing unpopularity of the Democratic agenda over the past months. Las Vegas Review-Journal polling, in fact, found that the turnaround came at least two years ago: 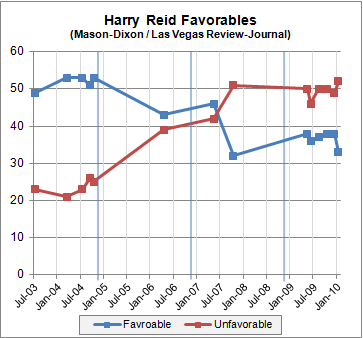 The causality here seems to be fairly clear. Reid’s favorables dipped from 50/25 to about 45/40 after he took over as Senate Minority Leader in 2004. They then dropped further — about to their present position of 35/50 — after the Democrats took over the majority in 2006. The decline in Reid’s numbers, ironically, came at a time when most other Democrats were on the ascendancy and Team Blue was winning almost every competitive election.

But being a majority leader, of late, has been hazardous to one’s political health. Reid’s predecessor, Bill Frist of Tennessee, retired rather than seek re-election in 2006; although Frist had pledged to serve only two terms, his approval ratings at the time of his retirement were in the 40s, and his re-election would have been highly uncertain. Preceding Frist was Tom Daschle of South Dakota, who famously lost to Republican John Thune, then Trent Lott of Mississippi, who stepped down from his leadership position after racial remarks of his own (although Lott did win re-election to the Senate, in 2006). Before Lott was Bob Dole of Kansas, who abandoned the position to concentrate on his losing Presidential bid; before Dole was George Mitchell of Maine, who quit politics at the relatively young age of 62 after being unable to produce legislative victories for Bill Clinton in 1993-94.

Whatever Reid’s qualifications as a legislative point guard — from my vantage point, much of the criticism has been deserved but much has not been — it has been damaging to his electoral position in at least two ways. Firstly, Reid is not a naturally charismatic politician. Ordinarily, this is less fatal than you might think: meet a Congressman, and you’d be surprised at how often he fails to stand out from the crowd, instead surviving based a combination of organizational skills, constituent services, and a reputation for trustworthiness — all of which Reid has in spades. But the party leadership position draws more attention to Reid’s weaknesses, particularly in the Internet/cable era where it’s harder to hide from the cameras.

Secondly Reid, who once was once regarded as something of a conservative and had National Journal ratings in the 60s, has been unable to publicly oppose elements of the Democratic agenda which he might find electorally disadvantageous. Although Nevada may have become bluer, its unorthodox demographics — highly unionized and relatively nonwhite, but also somewhat libertarian and with a sizable Mormon minority — do not lend themselves to a doctrinaire liberal (or conservative) position.

Indeed, some elements of the Democratic agenda, particularly health care, are not wearing well on Nevadans, and so a different Democratic candidate would hardly have a free pass. Nevertheless, considering the unimpressive Republican opposition, and that Democrats have developed a sizeable registration advantage in the state, we would probably characterize the contest as “Lean Democrat” if Reid were to be replaced by another candidate like NV-1 Representative Shelly Berkley or State Senate President Steven Horsford.

It’s no business of ours whether Reid retires. Because he is the Majority Leader, there are a whole host of political considerations that come into play in addition to electoral ones, as well as the prospective impact on the news cycle. He does have some reasonable prospect of winning and he does have some advantages, notably his money and his polished, professional staff. And it would almost certainly be a terrible idea to announce a retirement within the next 45 days, while the fallout from his remarks to Mark Halperin lingers, and while Republicans could claim another scalp.

Nevertheless, this is a conversation that Democrats need to be having, if they aren’t already. Reid’s favorability ratings are quite similar to those of former New Jersey governor Jon Corzine, who like Reid had an enormous monetary advantage, a good turnout operation, and a somewhat underwhelming Republican opponent, but ultimately gathered no more than 45 percent of the vote.