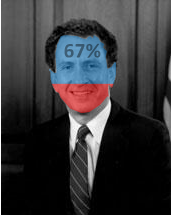 I can’t say we didn’t see this coming, because we did. But Arlen Specter is starting to make good use of that ‘D’ beside his name and behave like an actual Democrat, indicating that he’s open to a compromise on the Employee Free Choice Act and a public option on the Democratic health care plan.

Specter’s record in the Senate since changing parties on April 28th has been somewhat more mixed, however. The Senate has held 22 roll call votes since Specter’s party switch; Specter has taken the position of the majority of the Democratic caucus on 17 of these (77%). However, some of these votes were procedural with both the Democratic and Republican caucuses in broad agreement. Of the 15 votes on which the Democratic and Republican caucuses have split, Specter has sided with the Democrats on 10 occasions and the Republicans on 5; that makes him 67% Democrat and 33% Republican. A table of these votes and some further analysis follows below the fold.

For comparison’s sake, Specter’s colleague in the Senate, Bob Casey Jr., has sided with the Democrats on 14 of the 15 contentious votes (93%) over this period. Blue Dog Democrat Evan Bayh has voted Democratic on 8 of 14 bills, or 57% (Bayh skipped one vote), and Ben Nelson, probably the Senate’s most conservative Democrat, has voted with them on 7 of 15 occasions (47%). Olympia Snowe, the most liberal Republican, has voted Democratic 5 out of 15 times (33%).

Based on this admittedly small sample, then, Specter does appear to be voting more liberally than the most famously conservative Democrats, as well as any and all Republicans. But, he still has a ways to go before voting as a “normal” Democrat from his state might.