After Massachusetts, I’m going to try to resist critiquing individual polls that contain pessimistic results for Democrats, particularly since we’re transitioning into a more systematic and objective approach into forecasting the midterms. Nevertheless, I find this Franklin & Marshall poll that shows Arlen Specter 14 points behind Pat Toomey — and Joe Sestak 23 points behind Toomey! — to be a little dubious. Here is the key graphic from that poll: 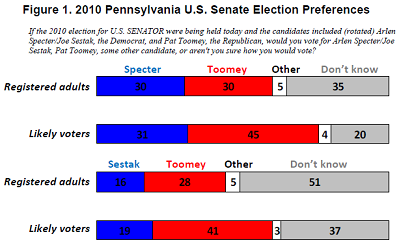 Note that Specter and Toomey are tied (although with a huge number of undecideds) among registered voters; Toomey opens up his large lead only among likely voters.

Aren’t likely voter polls more accurate than registered voter ones? The general consensus (see also Mark Blumenthal, who has written much more extensively about this) is that likely voter polls are better when you’re close to an election but perhaps not any better when you’re months away from one and few people are tuned into politics. Frankly, it’s probably not a bad idea to have some mix of the two at this stage when compiling a polling average. But when a pollster offers a choice, as F&M did, our policy has been to use the registered voter version up through Labor Day of the election year and then the likely voter version thereafter.

The reason why I’m somewhat disinclined to look at the likely voter results in this particular instance is because Franklin & Marshall shows only 395 likely voters among a sample of 993 registered voters, i.e. a turnout rate of about 40 percent of registered voters. But turnout among registered voters in midterm elections typically averages between 65-70 percent, and will probably be toward the high end of that range in Pennsylvania with such a highly competitive Senate race. So whatever screen that F&M is using, they’re kicking out a lot of people who almost certainly will vote in November.

There’s also the issue that the number of undecideds is rather high — 20 percent in the Specter-Toomey matchup (plus another 4 percent voting for ‘other’ candidates) and 37 percent for Sestak-Toomey. Some of this is because Franklin & Marshall, unlike most other pollsters, explicitly prompts for the option “or aren’t you sure how you’d vote”. Nevertheless, if they’re kicking out 60 percent of voters for being “unlikely”, you’d think they’d have a pretty knowledgeable and committed group among those they keep in — and yet a lot of those folks don’t yet know whom their going to vote for.

I wish that more pollsters would disclose exactly what likely voter screens they are using. But whatever they’re doing, Franklin & Marshall is not winding up with a sample that accurately reflects what turnout will actually look like in November — their subsample seems to be less a “likely voter” population and more of a “highly enthusiastic” voter population. Clearly the Republicans have an enthusiasm advantage this cycle and clearly that could be enormously consequential for Democrats — they shouldn’t comfort themselves too much by looking at registered voter polls which, if the enthusiasm gap persists, will tend to overestimate their performance. But this one is probably going a little too far.