A new Quinnipaic poll has bad news for Arlen Specter in Pennsylvania’s 2010 Senate contest. His lead over Pat Toomey, the Republican opponent who earlier this year forced him from his party, has shrunken to just one point, 45-44.

I’m inclined to take this poll mostly at face value, in terms of how things would play out if an election were held today. Quinnipiac is a good polling firm and have been running surveys in Pennsylvania for a long time. The party cross-tabs looked potentially a little bit funky to me, so I re-ran the numbers using 2008 election splits (D 44, R 37, I 18), but it didn’t help Specter much — his lead went from 45-44 to 46-43.

Toomey is much less known than Specter — only 44 percent were able to register an opinion about him, although most of those that did thought positively of him. Usually when a candidate has poor name recognition this early in a race, it’s a good sign, since it means that his numbers have more room to grow. But I’m not sure that’s the case here. Currently, only 10 percent of Pennsylvanians describe Toomey as “too conservative” (38 percent describe him as “about right” and 4 percent as “too liberal”!). But Toomey is, in fact, very conservative. While previously in the House, he compiled a DW-NOMINATE score of +.768. That’s a very big number; there are only four current members of the House who are to Toomey’s right. Toomey did not reside in an especially conservative district, by the way; in fact his former district voted for Barack Obama 56-43. So there’s no particular reason to think he’d moderate if he represented the whole state.

Pennsylvania is sometimes thought of as at least being a socially conservative state. While parts of it are — and the state is idiosyncratic on some issues like abortion — this isn’t really true on balance. In 2008 exit polling, 27 percent of Pennsylvanians described themselves as conservative, versus 34 percent of the nation as a whole. Pennsylvania also isn’t a particularly liberal state; it’s a moderate one with a strong Democratic machine and a strong Democratic tradition, especially in Presidential elections. 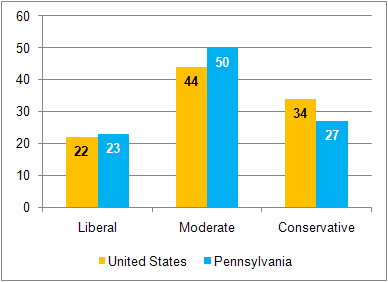 In theory, asToomey has a six-year voting record, Specter ought to be able to point to plenty of controversial votes that he cast and brand him as a ultraconservative rather than a moderate. The question is how much that will resonate. For one thing, since Republicans really aren’t in any place to implement controversial measures like, say, privatizing Social Security, or extending the war in Iraq, it might seem to voters like something of a moot point. But more importantly, there might be questions about the person doing the messaging. Toomey, who does not shirk from his conservativeness, will probably have a response something along the lines of: at least I’m staying true to my beliefs, whereas my opponent can’t decide what he believes in. In that sense, Specter’s primary opponent, Joe Sestak, might have an easier time of things (although expect Sestak to keep the netroots somewhat at arm’s-length and highlight his own moderation if he wins the primary and Toomey is running a good campaign.)

Ultimately, I’d still rate either Democrat as about a 2:1 favorite over Toomey, this poll not withstanding. But Pennsylvania will certainly be moving up in next month’s Senate race rankings.