Below is a chart of all reasonably current polls in Pennsylvania. On one axis, I’ve plotted Clinton’s lead in each poll, and on the other, the number of undecided voters in that poll. 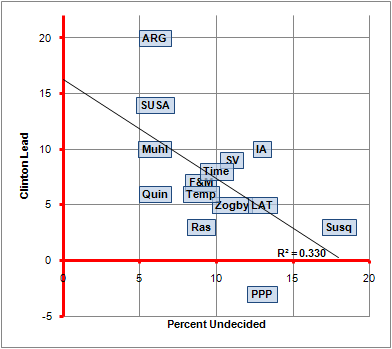 If we trace the regression line such that it crosses the y-axis — meaning, there are zero undecideds — we’d project a Clinton win by 16 points.

In order for that to occur, Clinton would need to pick up 9.2 points from undecided voters, to Obama’s 0.6. In other words, she’d have to win nearly every undecided voter. Even when elections break at the end — they don’t break that strongly. Maybe Clinton could win 2 out of 3 undecided voters (which would imply a victory margin of about 10 points), but not 9 out of 10.

So — I wouldn’t take these numbers all that seriously. At the same time, I think there is a case to be made that Clinton has a couple extra points worth of cushion in her Pennsylvania numbers versus what the polling averages currently imply.