I’ve been turning my attention recently to the House, which is almost certain to be the more active of the two chambers in the first 30-60 days of the Obama Administration. One thing I’ve determined is that the Democrats turned in a truly dominant performance in elections for the Congress this year, to an extent understated by the 79-seat advantage they now claim in the House.

We can calculate an aggregate popular vote for the Congress simply by adding up the raw vote totals from the 435 elections for the House of Representatives across the country. The Democrats won this year’s House popular vote by 8.9 points, roughly matching the 7-8 point advantage they had in partisan identification on national exit polls.

What happens when a candidate runs unopposed varies from state to state. Some states automatically award him the seat without putting him on the ballot or tallying his votes. The House popular vote total, therefore, will not give any credit to the Democrats when this happens. Other states will put the candidate on the ballot by himself (or against third-party opposition), let the voter punch the card for him, and then tally the results. When this happens, though, there is often a rather severe undervote, since there’s not much reason to vote in a contest where you have only one choice.

The upshot of this is that the House popular vote tends to discount those areas where a party is so dominant as to discourage competition, because less competition in a district also means fewer votes in that district. Congressional Districts have roughly the same number of people as one another, and so a fairer way to evaluate the House might simply be take the average of the vote share received by each party across all 435 districts (giving a candidate credit for 100 percent of the vote when he runs unopposed). If we do things this way, then we find that the Democrats won, on average, 56.0 percent of the vote on November 4th, and the Republicans 41.3 percent. That’s a difference of 14.7 points, far more formidable than nominal 8.9 point advantage that the popular vote total gave them. 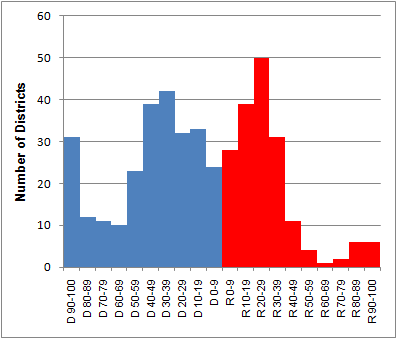 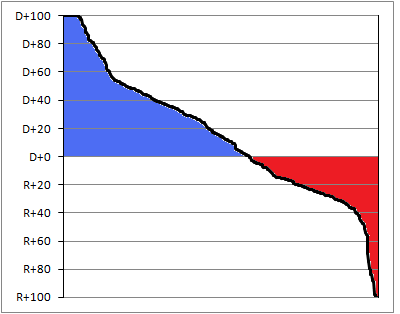 What characteristics did the DDD’s hold in common? In general, they were more urban, younger and poorer (although not any less educated) than the country as whole, and contained a significantly higher share of minorities. But, with 126 such districts, there was quite a bit of room for diversity between them. Basically, the Republicans aren’t competitive virtually anywhere on the Eastern Seaboard north of Washington, D.C., and virtually anywhere on the Pacific Coast north of Monterey. They aren’t competitive in virtually any dense urban center, or in virtually any majority-minority district (such as the black belt in the South or Hispanic-majority districts in South Texas). Finally, there are a dozen or so districts where Republicans are virtually nonexistant because of the presence of a large College or University. Collectively, that adds up to a lot of districts — almost a third of the country.

Conversely, the Democrats have very few districts in which they can’t play some angle or another. Nearly all of the Republican-dominated districts fit into a particular template: white, Southern, rural or exurban, lower-middle class (but not usually impoverished), low-mobility, with poorly-diversified economies reliant on traditional sectors like manufacturing or agriculture. There are only a couple dozen such districts throughout the country.

One can argue, I suppose, that the Republicans’ vote is distributed rather more efficiently than the Democrats. Indeed, they have far fewer wasted votes than Democrats, who have thousands of largely redundant voters in urban centers like Chicago and New York. On the other hand, I can think of at least four long-term structural advantages that the DDD’s provide to the Democrats:

The second advantage that comes into play is redistricting, which will take place after the 2010 census is completed. If the Democrats’ voters are less efficeintly allocated now, they would seem to have more to gain once redistricting takes place and reshuffles them.

The third advantage is resource allocation. Seats that are won by 40+ points require next to nothing to defend, allowing the Democrats to concentrate their resources in more competitive areas.

Finally, there is a synergistic relationship between the vote margin in a particular district and the ideology of the congressman. That is, districts that are won by wider margins can support more progressive policymakers. The Congerssional Progressive Caucus now has 71 members, considerably larger than the Democrats’ 47 Blue Dogs. Many congressional districts are so blue that the congressman is theoretically under more threat of losing to a primary challenge on his left than a Republican challenge on his right.

Although the Republicans face an arduous task in crafting a path to 270 electoral votes, finding 218 viable seats in the Congress might represent the more difficult challenge.