I recently read an article that said most of the prison population is religious while there are very few atheists in prison. Please tell if this is true for the United States.

Data on religion in U.S. prisons is hard to find and usually comes from biased sources. Back in 1997, a blog post appeared on HolySmoke.org, a now-dormant anti-religion website. Beneath the headline, an author using the name Rod Swift published statistics apparently received from the Federal Bureau of Prisons (BOP) showing the religious affiliations of inmates. One number jumped out at Swift: 0.2 percent of the prison population was atheist. 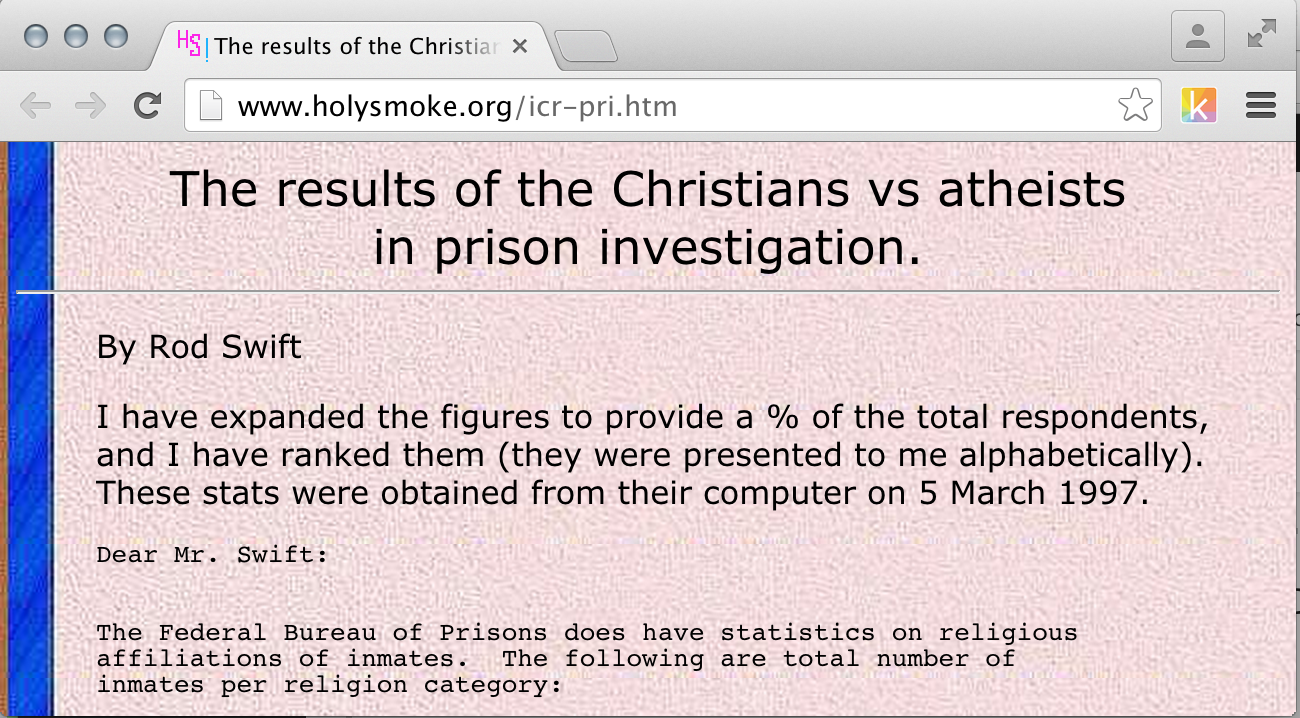 That number became a routinely cited statistic that wasn’t really challenged or updated — until 2013. Hemant Mehta (a writer who, seven years earlier, had become famous for selling his soul on eBay) issued a new Freedom of Information Act request to the Federal Bureau of Prisons asking for updated figures about the religious affiliation of prisoners. Today, those numbers are still the most detailed ones available.

But first, a few caveats. While you may have been interested in the religious affiliation of the 1.4 million Americans being held in state prisons, this data only relates to federal prisoners — of which there were about 216,000 in 2013 (PDF).

The data here is self-reported, so it’s also dependent on whether prisoners were willing to disclose their religion. Seventeen percent of inmates listed “no preference” for their religion, but the Bureau of Prisons couldn’t clarify how that is different from the 3 percent of prisoners who described themselves as “Other,” so I decided to cut it out of the data.

To answer your question, I used Census Bureau data from 2008 (it’s the most recent we have), but its categories are pretty different from the ones used by the Bureau of Prisons.

Take Rastafarians for example. According to the BOP, 1.9 percent of federal prisoners identify as Rasta, but the Census Bureau doesn’t list Rastafarians as a separate group. Instead, the Census uses one category titled “other religions” that encompasses a whole range of groups including people who practice Santeria (as 1.2 percent of prisoners say they do), along with Scientologists and Druids.1

There are other categories that don’t match up. According to the Census Bureau, 0.6 percent of Americans describe themselves as Muslim. In prison, that figure is 5.6 percent. It’s already a considerable difference, but an additional 1.8 percent of prisoners identified with the Nation of Islam and another 1.2 percent said they were “Moorish” (which the BOP said should also be considered a variant of Muslim). Altogether, the percentage of Muslims in the prison population is about 14 times higher than that of the general population.

There are other noticeable differences: a prisoner is 39 times more likely than an un-incarcerated person to identify his or her religion as American Indian. Conversely, prisoners are far less likely to be Protestant than the rest of the country.2

Most importantly though, Caroline, you appear to be right about religiosity in prison. Overall, almost 1 in every 1,000 prisoners will identify as atheist compared to 1 in every 100 Americans. 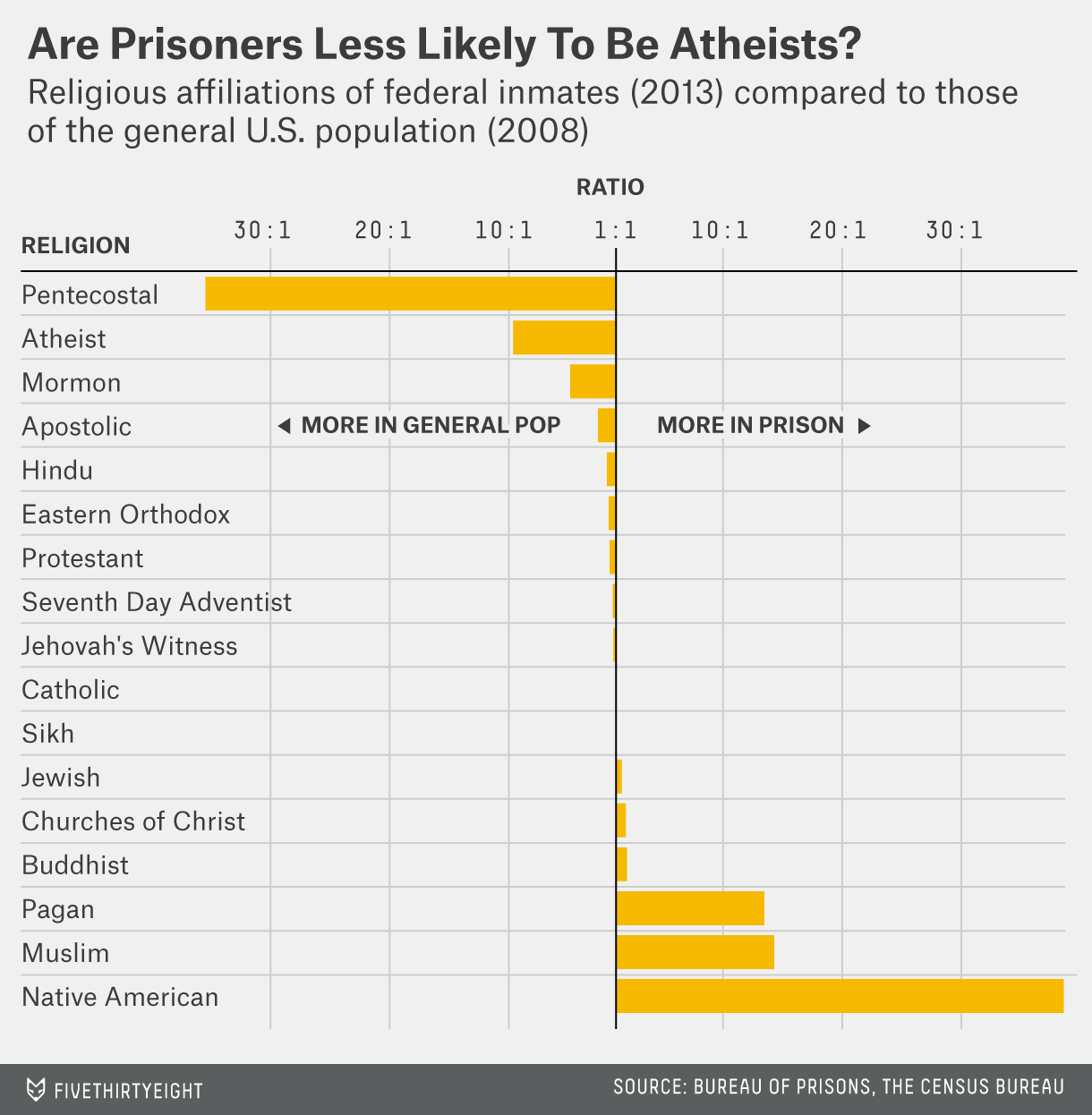 So what explains these discrepancies between religious affiliation inside prisons and outside them? I’ll set out a couple of possible theories.

Ed got me thinking: If few prisoners bother to change their religious affiliation in the official data, the theories I’ve described above are more likely to be relevant. But if prisoners are letting officials know about their change of faith (which I’m told by the BOP is relatively easy to do; it can be as simple as mentioning it to the chaplain), then it’s possible that prison conversion is influencing these statistics.

In 2012, Pew Research Center conducted a 50-state survey of prison chaplains of various faiths (they’re state chaplains though, so they don’t work with the federal inmates I’ve mentioned above — sorry, it’s the best data I could find). Three-quarters of the chaplains they spoke to said “religious switching” was common among inmates where they worked. When asked which affiliations were growing, chaplains were most likely to list Islam (51 percent), followed by Protestant and Pagan. 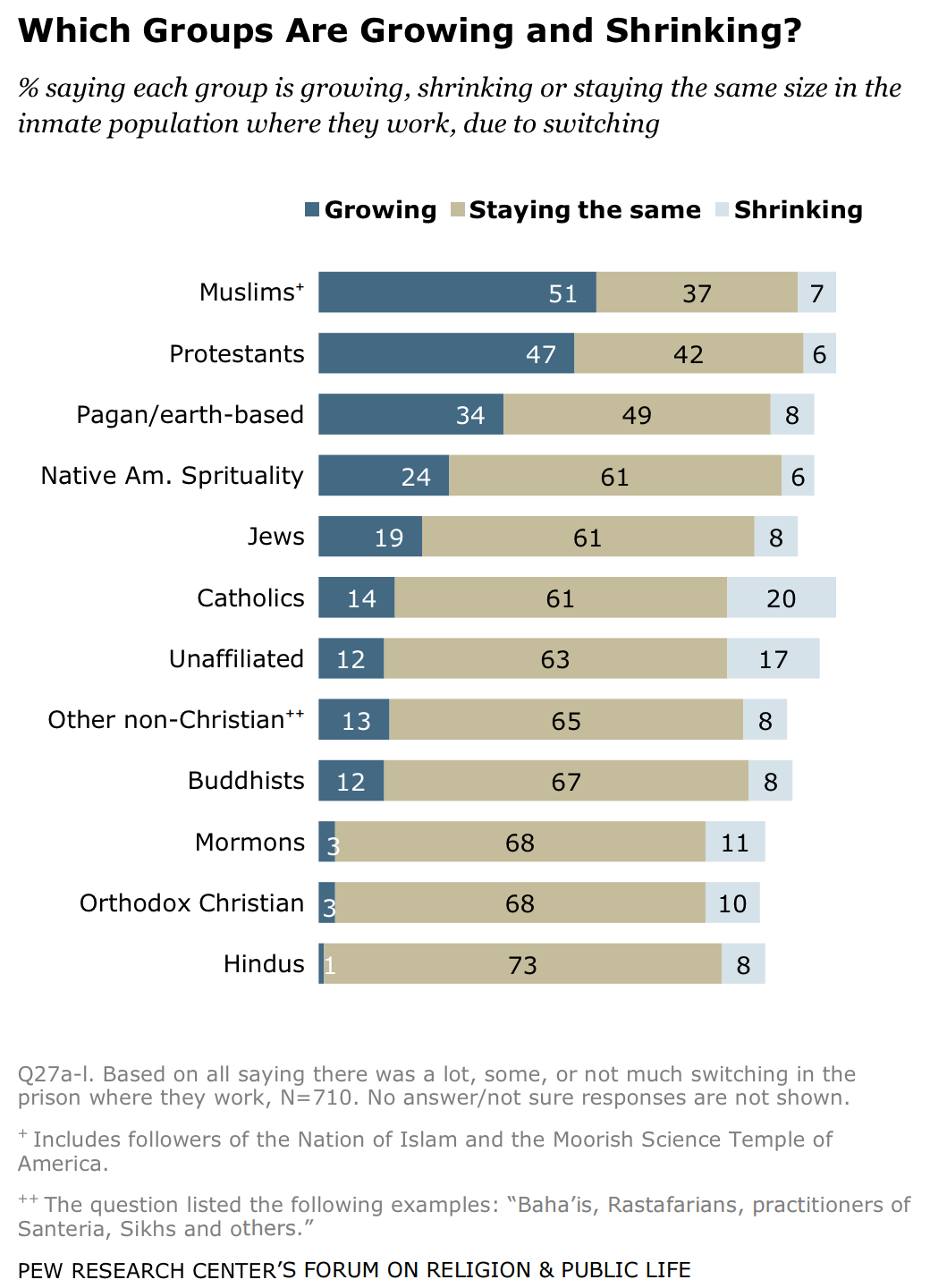 Though almost all of the state prison chaplains describe spending their time organizing religious programs, many suggest that religious influence is coming from elsewhere in the system. Seventy-four percent of the chaplains said that efforts by inmates to proselytize or convert other inmates are either very common (31 percent) or somewhat common (43 percent) in the prisons where they work.