When Mohamed Salah set up for a penalty kick in just the second minute of the 2018-19 UEFA Champions League final, he had a chance to score the potential deciding goal in one of global sports’ biggest contests. With a reported 63,272 fans in the stands, an estimated 380 million to 400 million people watching at home and the European club championship on the line, the pressure to convert was intense.

Fast-forward a little more than 14 months, and the 2019-20 edition of the competition is finally ready to restart after play was suspended in March because of COVID-19. Four teams have already earned a bid to the quarterfinals, and eight others will continue play in the round of 16 for the remaining spots. And as with last year’s final, penalty kicks are likely to play a role throughout the rest of the knockout rounds.

But while the TV audience, the prize money and the trophy — “Ol’ Big Ears” — will all be waiting for the eventual winner, there’s one major factor missing from when Salah slotted home last year’s winning goal: people in the stands.

We already know that stress can affect penalty kicks. A 2007 study in the Journal of Sports Sciences found that psychological factors, like stress, were more influential than ability or fatigue in penalty-kick conversion. It seems like tens of thousands of people screaming at you would have a pretty big impact on your stress level. But do fans really affect the outcome of a penalty kick? Now we can find out: Because of games played behind closed doors this summer, we have data on penalty kicks taken with and without fans in attendance from four of Europe’s top five club leagues.1

For the five years leading into this season, the Bundesliga, La Liga, Premier League and Serie A had annual leaguewide penalty conversion rates between 70.3 percent and 81.7 percent, with an overall across-five-years average of 75.7 percent. There was a broad downward trend from 2015-16 through 2017-18 before conversion rates spiked in 2018-19. In the in-front-of-fans portion of 2019-20, the average rate across the leagues climbed again slightly, to 81.3 percent. 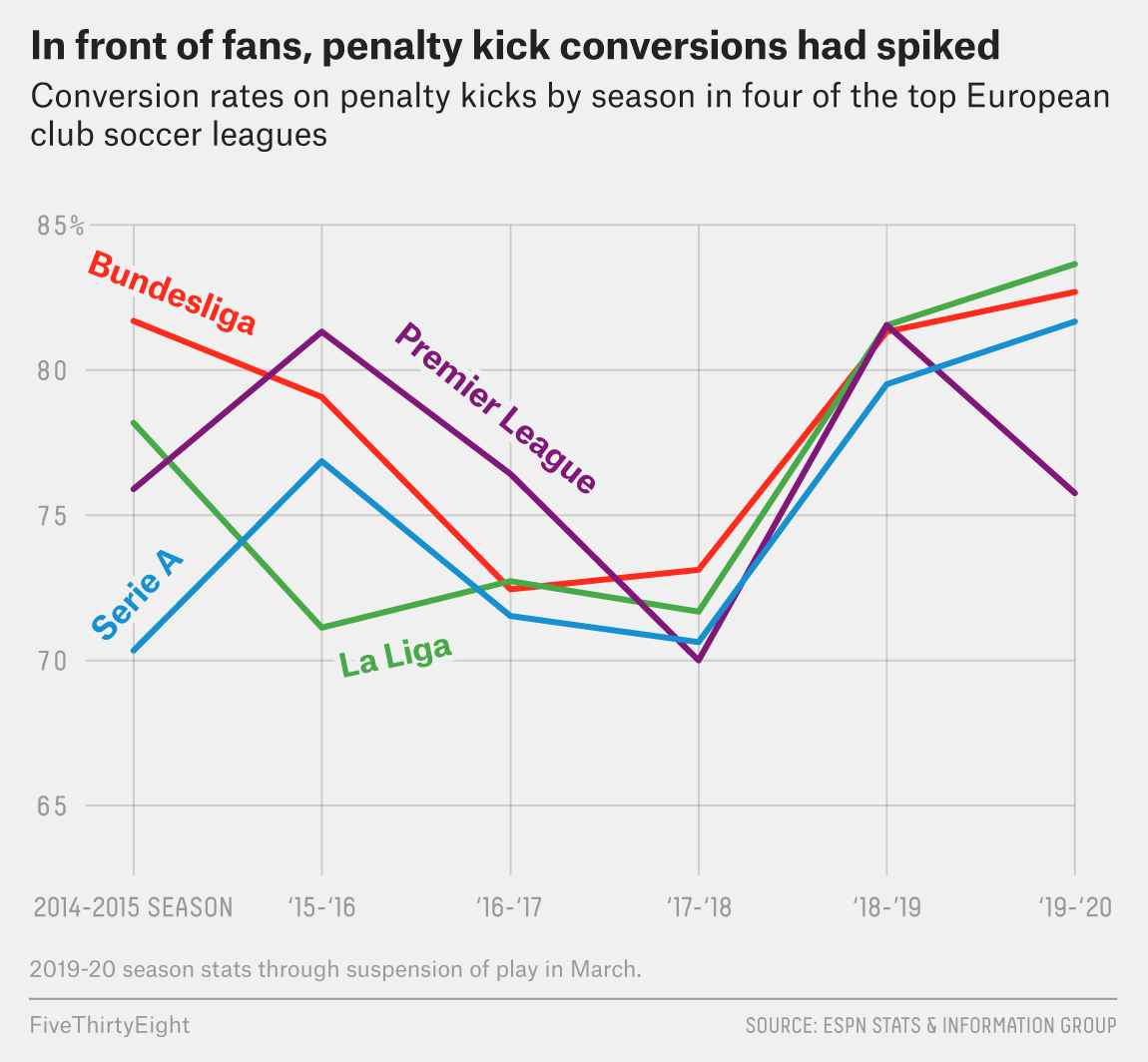 In England and Germany, fewer penalties were awarded this season than the season before. But in La Liga and Serie A, penalties were up — way up. In fact, Serie A blew past its all-time record for spot-kicks awarded with eight games left to play — though a new handball rule is likely to blame for much of that.

VAR (Video-Assisted Review) might have also played a role here. Serie A and the Bundesliga piloted VAR in 2017; in 2018-19 both leagues improved their implementations. La Liga deployed VAR in 2018-19 that season as well, and according to Sport24, VAR changed close to 50 of La Liga’s 75 reviewed penalty decisions. However, by 2019-20, all four of these leagues had implemented VAR, and in two of them, the rate of awarded penalties per game actually went down. 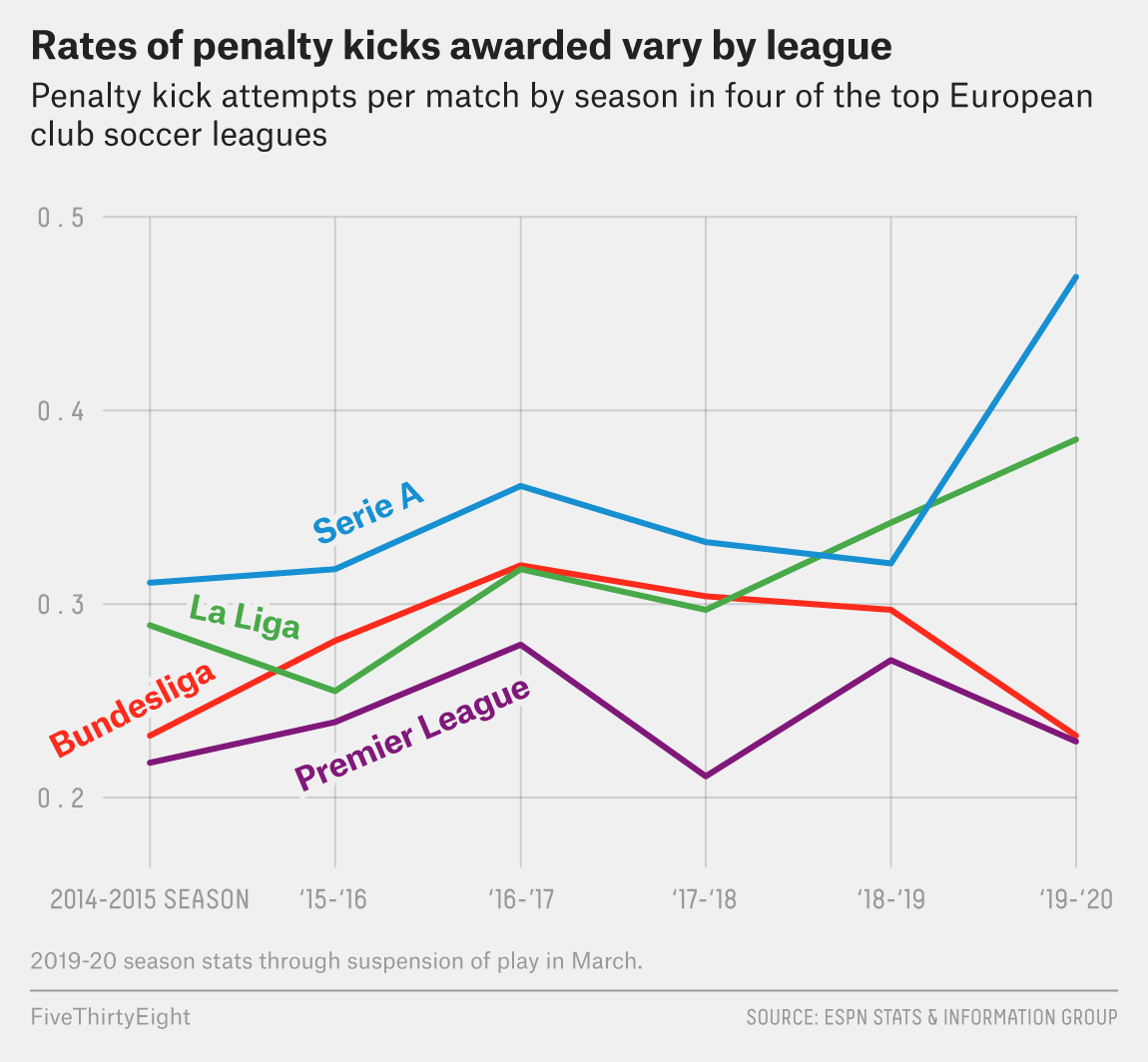 After the break, all four leagues saw at least a slight increase in the rate of penalty kicks awarded. Did officials feel more freedom to make potentially game-deciding calls? Did rusty players commit more in-the-box fouls? Either way, the effect seemed to be universal:

When it came to actually scoring with those opportunities, though, the empty-stadium effect was negligible. Across four leagues, the overall conversion rate hardly changed, slightly dipping from 81.3 percent with fans to 81.1 percent without fans:

That overall change, however, would be different if you discounted the Premier League. Penalty takers in the English top flight buried 22 of 26 attempts, an 8.8 percentage-point increase in conversion rate from before the break.

According to the Journal of Sports Sciences study cited earlier, perceived pressure as it relates to level of competition does affect penalty kicks. With the Premier League title effectively locked up before the restart began, there were fewer important league games left to play. In the Bundesliga, Bayern Munich also ran away with the title — but only 6 points ultimately separated second-place Borussia Dortmund from fifth-place Bayer Leverkusen, making the race for 2020-21 Champions League qualification tighter in Germany than in England.

Pressure could also explain the difference in conversion rates between the Champions League and the four European domestic leagues we’ve been looking at. As mentioned earlier, the success rate across the Bundesliga, La Liga, Premier League and Serie A over that five-year window was 75.7 percent. But in the Champions League — which included the top teams and players from those same four leagues — the success rate was about 71.9 percent,2 almost 4 percentage points lower.

After that 2019 final, Salah told BeIN sports that taking the potential Champions League-winning penalty for favored Liverpool wasn’t the most stressful moment of his playing career. “I shot the penalty which lifted us [Egypt] to the World Cup; I got used to penalties.”

There’s no question that fans can affect the mood and performance of the players they’re watching. A Champions League atmosphere without fans just won’t be the same.

“I’d be lying if I said it was normal and everything was fine because football is all about playing in front of fans and being driven on by the atmosphere,” Burnley striker Jay Rodriguez told ESPN. “They do have an effect on the games.”

But for all the ways this year’s Champions League will change because of the empty stands, the data shows fans can’t apply any more pressure to penalty-kick takers than the athletes already apply to themselves.