I heard a piece of news that sounded strange: The proportion of deadbeat moms (women who do not fulfill their child support obligations) is higher than for deadbeat dads.

When people write to me with a question, more often than not, they’ve had a personal experience that makes them feel invested in getting an answer. It turned out that was true for you, Jack; you let me know that growing up, you lived with one custodial parent while your other parent lived elsewhere — an experience you share with 28 percent of all American children younger than 21.1

You also told me that your dad was awarded custody of your care. That’s not as rare as some people might think — 18.3 percent of custodial parents in 2011 were fathers, according to the latest numbers from the U.S. Census Bureau, which is the source I’m using for all these figures. (Unfortunately, it doesn’t have data on same-sex parents.) While half of custodial mothers had legal child support agreements in place, only a quarter of fathers did (more on the reasons a bit later on).

Then there’s the gray area in between paying nothing and paying everything. The most common amount of child support due to custodial mothers is $4,800 annually, of which $2,500 is typically received (52 percent). For custodial fathers, median annual child support is less — it’s $4,160 — and fathers receive 40 percent of the amount they’re due.

Poverty rates also differ between custodial mothers and fathers, even if you set aside whether or not they’re receiving child support payments. In 2011, 31.8 percent of custodial mothers were living in poverty — the figure for custodial fathers is half that. That gap has persisted since 1993, although it narrowed in 2001 and again in 2009. Looking at the chart below, I’d hazard a guess that was because more custodial fathers lost their jobs in a bad economy. 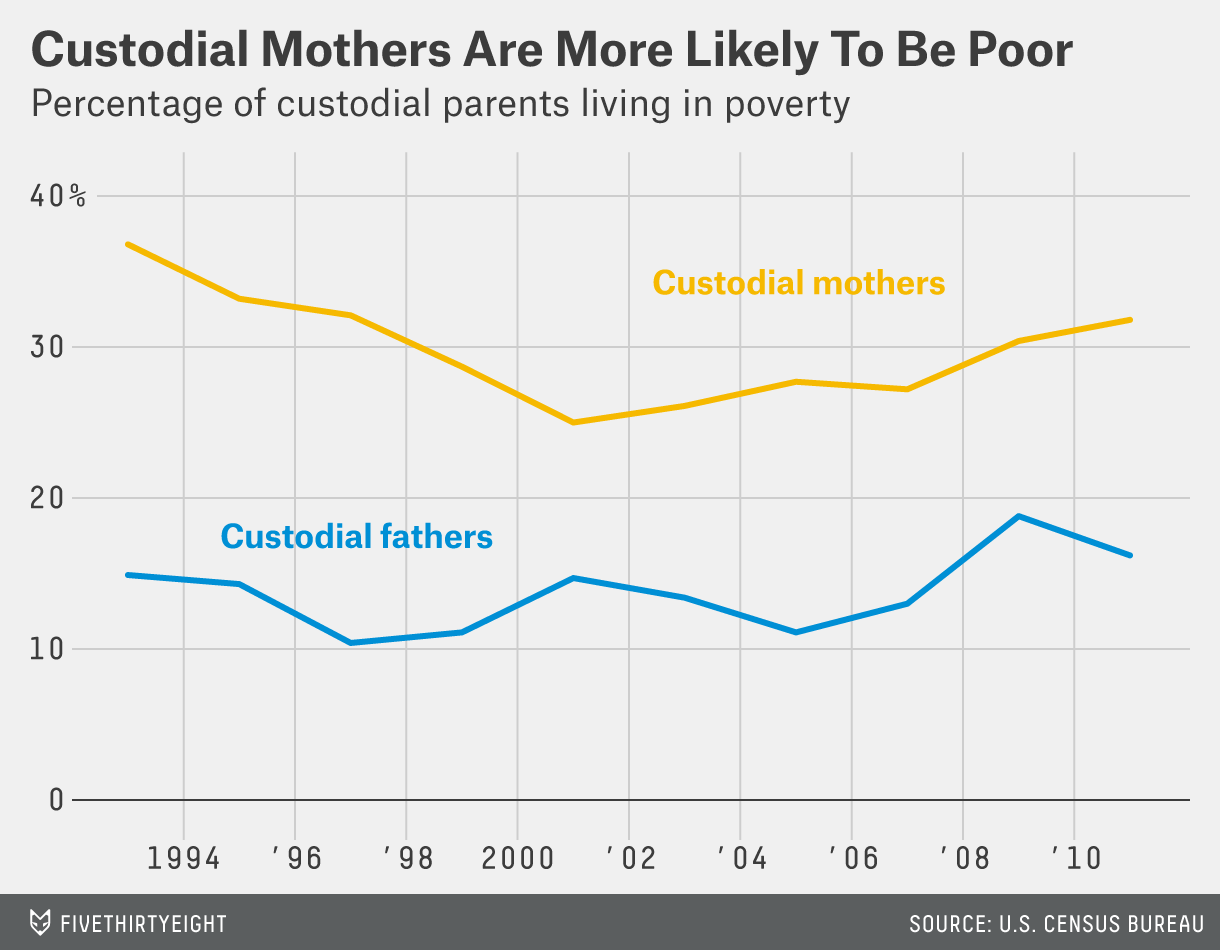 In fact, the overall employment status of custodial mothers and custodial fathers looks very different. Mothers were far more likely than fathers to be in part-time work or working for only part of the year, as opposed to in full-time work, and they were also more likely to be out of work altogether.

After you told me that you had no siblings, Jack, I wondered whether child care might be affecting those parents’ employment patterns. Custodial mothers were more likely than custodial fathers to have two or more children living with them (45.3 percent and 33.7 percent, respectively).2

Custodial dads are also more likely than custodial moms to receive non-cash support from the other parent. That means that moms who don’t have custody are more likely to pitch in for things like groceries, medical expenses, clothes and gifts. 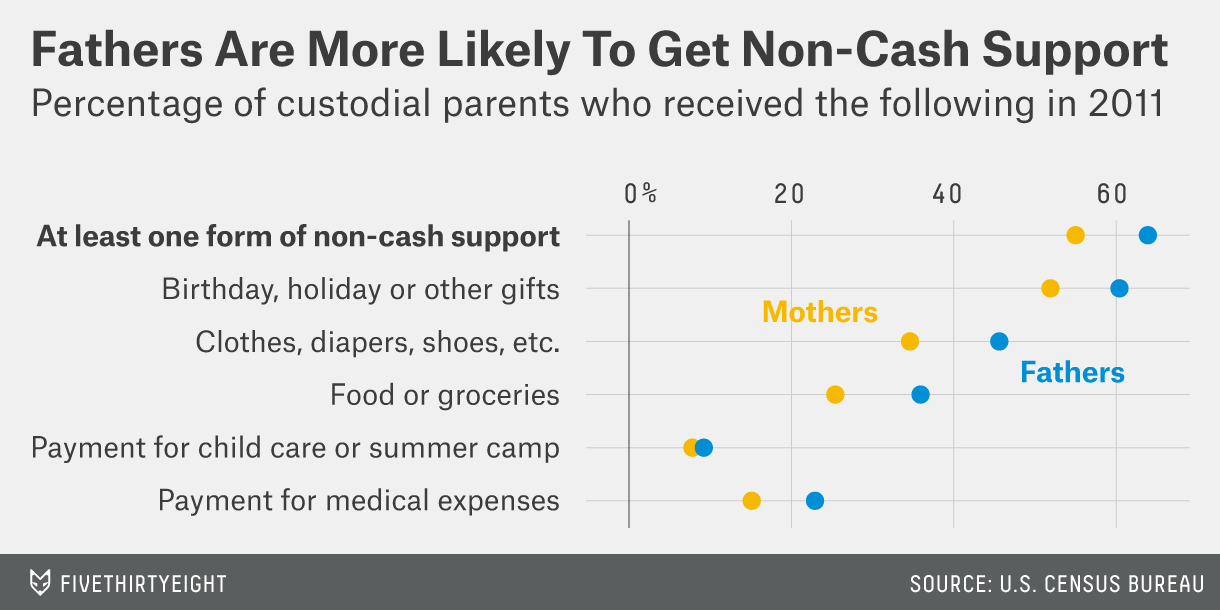 It’s starting to look like the term “deadbeat” is sort of misleading — not least because it’s a pejorative, colloquial term used to refer to parents who evade their responsibilities.

Let’s consider for a moment a separate group of custodial parents: those who weren’t awarded child support in the first place. There are lots of them to look at — nearly half of all custodial mothers and three-quarters of custodial fathers don’t have a legal agreement for child support payments in place. When asked why, custodial fathers are twice as likely to say “child stays with other parent part of the time.” They’re also slightly more likely to cite financial reasons like “child’s other parent provides what she can” or “child’s other parent could not afford to pay.” 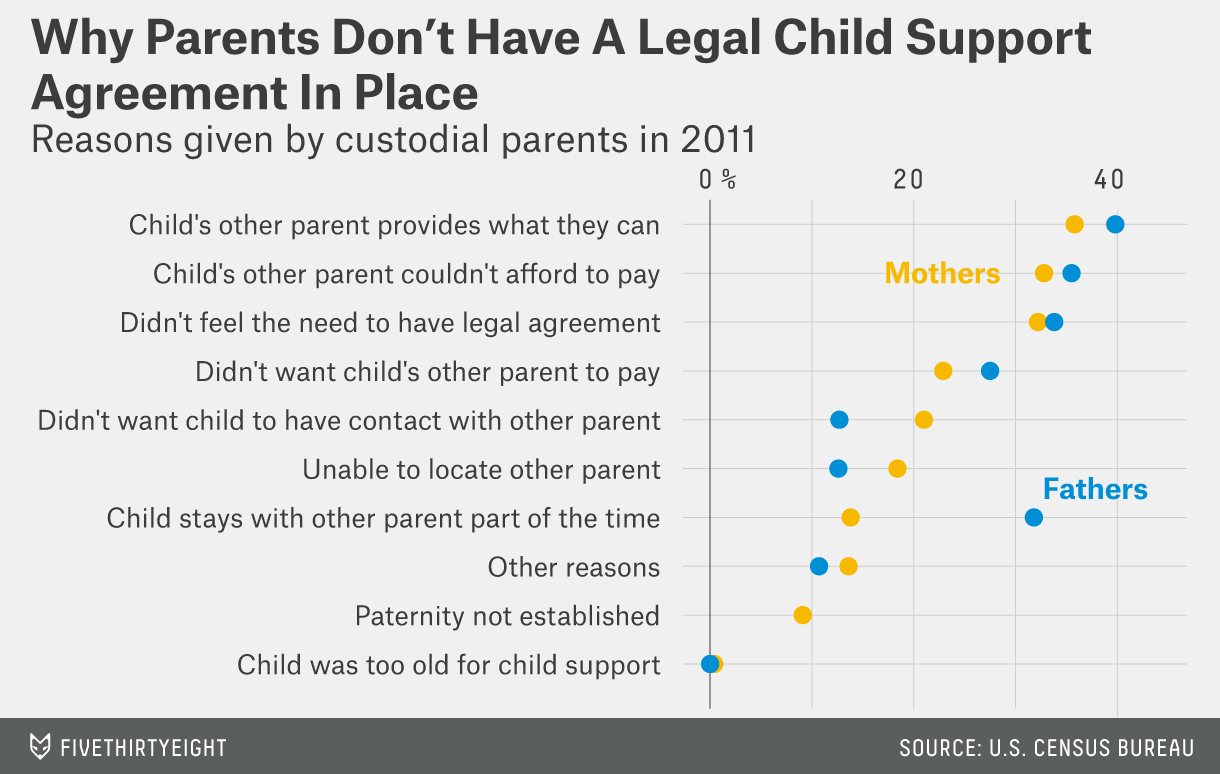 Like race, marital status3 affects the chances of being awarded child support. Only 41 percent of never-married custodial parents are awarded child support, compared with 64 percent of those who are divorced and remarried. Unlike race, however, marital status makes a big difference in the likelihood that a parent will receive the child support payments that he or she has been awarded: Custodial moms and dads who have never been married or are in their first marriages are much less likely to get any of the payments they’re due. 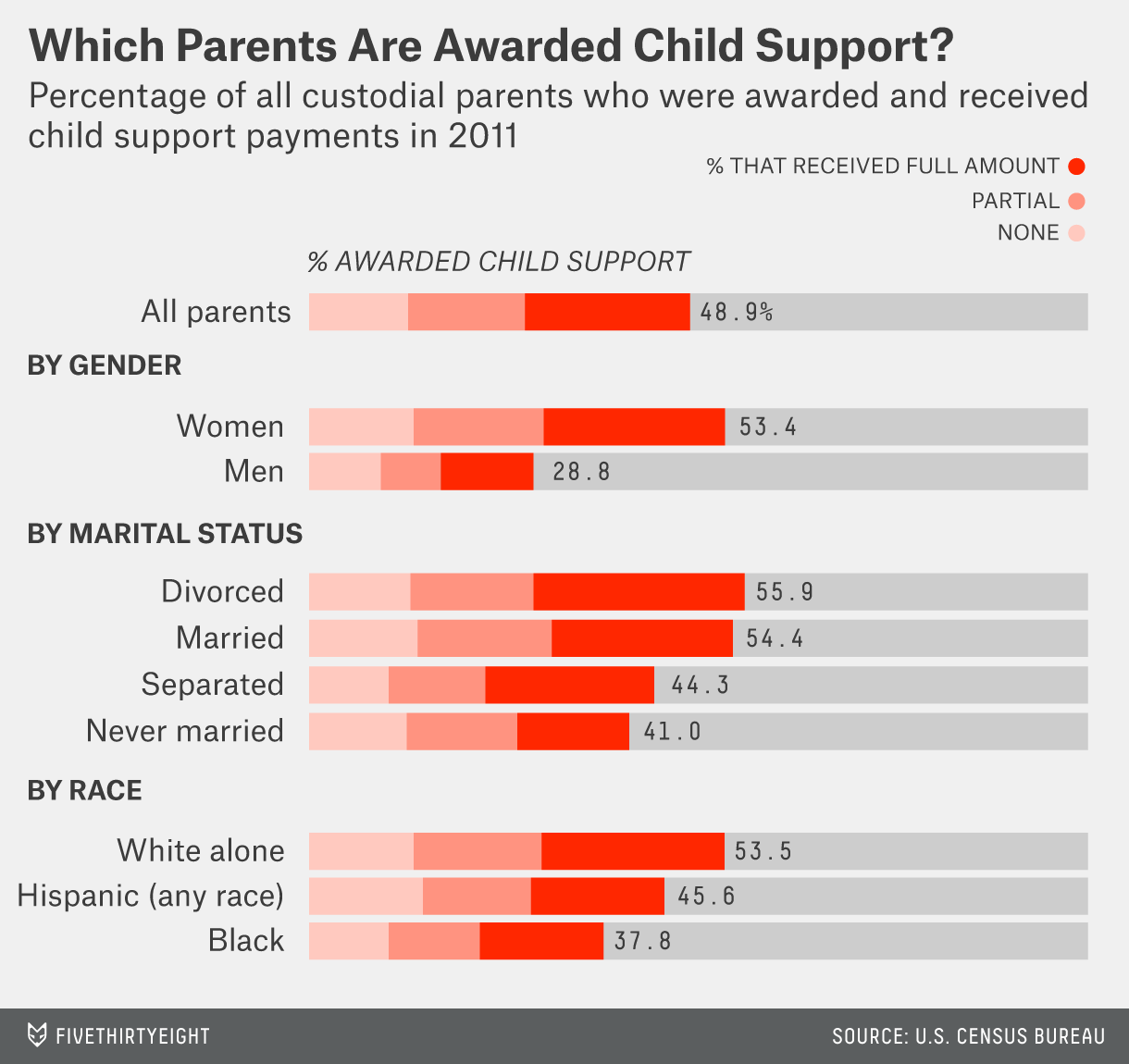 In reality, though, race and marital status are probably related — we know that white Americans are more likely than African-Americans to be married. So we need to understand why marriage appears to be such an important factor in receiving child support payments.

Cynthia Osborne, director of the Child and Family Research Partnership at the University of Texas at Austin, told me that there are two ways that child support can be put in place. The first is when spouses file for divorce; they might settle on custody and child support arrangements as well as the usual property matters. Those, Osborne told me, “tend to be moderately affluent families.” Then there’s another system called the IV-D program, which was established in 1975 to help custodial parents get the money they’re owed by giving the state the right to collect child support payments. Families in the IV-D program are more likely to be “moms on welfare,” according to Osborne.

I’ll admit it, Jack — I was surprised to learn that a slightly higher percentage of noncustodial mothers don’t pay any of the child support they’re supposed to. But looking at the statistics on poverty, working status and the reasons given for not establishing an agreement, it’s clear that on the whole, custodial fathers struggle a lot less financially than moms do.

Can You Find A Trio Of Squares?

Can You Systematically Solve A Friday Crossword?

A Statistical Analysis of the Work of Bob Ross