More polling data is starting to pour in on health care reform and it generally contains decent, but not great, numbers for Democrats. Most of the polls show a bump of some kind in approval for health care reform — but it’s not as large as that implied by the USA Today/Gallup one-day poll that was released on Tuesday. If we take an average of the four polls that have been conducted entirely after the health care bill passed the House, rather (those from Gallup, Rasmussen, Quinnipiac and CBS), they average out to 43 percent in favor and 46 percent opposed. Those are numbers that I think Democrats would gladly take relative to where health care has been in the past, but it’s not exactly as though the bill has become wildly popular — nor is it likely to do so in advance of the midterms.

Of the polls that have come out so far, I would most recommend the one from Quinnipiac, who in essence did two separate large surveys just before and after the health care bill was passed. Quinnipiac’s is by far the deepest of the post-health care polls, both in terms of the sample size and the breadth of the questions that were asked. And unlike some of the other pollsters, they used the same question wording when talking to both the befores and the afters.

Quinnipiac found about a 4-5 point bump in support for the health care bill itself, although a larger bump (8 points) in Obama’s handling of the issue. Obama’s overall approval rating, on the other hand, was little changed.

What’s a bit more surprising is that Quinnipiac also found a decent-sized bump in approval of the Democrats in Congress: from a pathetically low 30 percent to a not-quite-as-awful 36 percent. And most of the bump came from independent voters, among whom approval increased from 19 percent to 33. 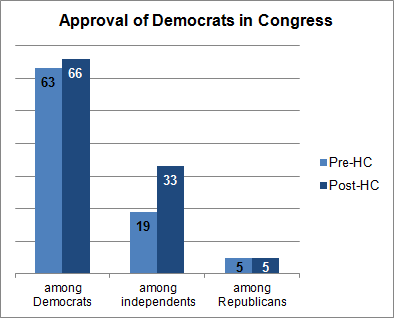 Perceptions of Republicans in Congress also improved somewhat — from 31 percent to 34 percent — but almost all of the bounce came from Republicans themselves: 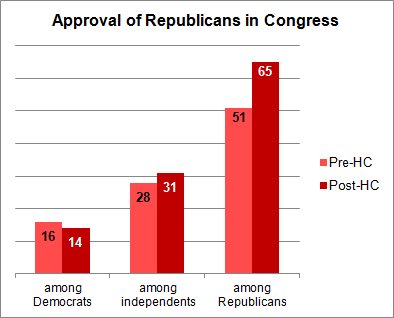 These results parallel those found in February by Public Policy Polling, whose poll showed that health care reform was actually thought of more highly by swing voters than by voters (mostly Republicans) who had already picked a side.

What I think we’re seeing are sort of two competing frameworks for how voters evaluate the performance of the Congress. One is more literal-minded: do we like the policies that the Congress has enacted or tried to enact? And the Democrats don’t score so well there — the numbers on health care are perhaps marginally improved, but they still aren’t very good and perceptions of the Democrats in Congress remain poor overall. On the other hand, voters may also be responding — perhaps more at a subconscious level — to the extent to which each party in Congress looks effectual or not. There, the numbers seem to be a bit better for Democrats — they’ve at least managed to do what Democrats with large majorities are supposed to do. Moreover, the gains may be coming from relatively important groups, such as independents who would still consider a vote for the Democratic party Republicans in Congress, meanwhile, have also gotten some credit for their valiant goal-line stand — but most of it seems to becoming from Republicans themselves, who were already highly motivated to turn out to vote.

There is arguably a similar dynamic with respect to President Obama: the numbers on his handling of health care have improved more than the numbers on the health care bill itself. Voters are certainly not enamored of the policy, but at least he appears to have some follow-through. On the other hand, Obama’s overall approval ratings have not improved much — although could also reflect the fact that health care reform actually isn’t quite that essential in voters’ minds as compared to things like the economy.

On balance, I think if you polled Republican strategists right now and they were being honest, they’d probably concede that Democrats are better off for having brought health care to completion after having invested so much energy in it before. The Democrats have a case they can make now — we’re making the tough decisions and getting things done — which may not be horribly persuasive to much of the electorate but is at least marginally better than the complete directionlessness they seemed to be exhibiting a few weeks ago.

On the other hand, I think if you polled Democratic strategists and they were being honest, they’d probably concede that — electorally-speaking — Democrats would have been better off if they’d found a different direction last year, focusing perhaps on financial reform and then only turning to health care if their numbers warranted it. One of the risks in undertaking health care in the first place, indeed, is that there was essentially no exit strategy: no matter how badly the electorate reacted to the policy — and they reacted quite badly — Democrats would probably have been even worse off if they’d abandoned it somewhere along the way.