The two behemoths’ brands don’t quite swallow up the rest of the tech sector. But it’s close.

On Thursday, Interbrand unveiled its 15th annual list of the top 100 most valuable brands. Topping the list was Apple, with a brand value of $119 billion, followed by Google, whose brand totaled $107 billion. This was the first time any brand had topped $100 billion in value, much less two.

So, the U.S. business landscape is becoming more technology-heavy.

But technology is also becoming more top-heavy. Apple and Google are outliers, at least for brand appreciation. Excluding them, total technology brand value has risen about 11 percent since 2011. Add them in, and the sector’s brand value is up nearly 50 percent.

A better measure is the average technology company’s brand valuation (that is, the average of those ranked in the top 100 by Interbrand). That has risen 38 percent, to $37.9 billion in this year’s rankings. But again, removing Apple and Google, and the typical major technology company has had a paltry 0.7 percent cumulative increase, to $24.3 billion. 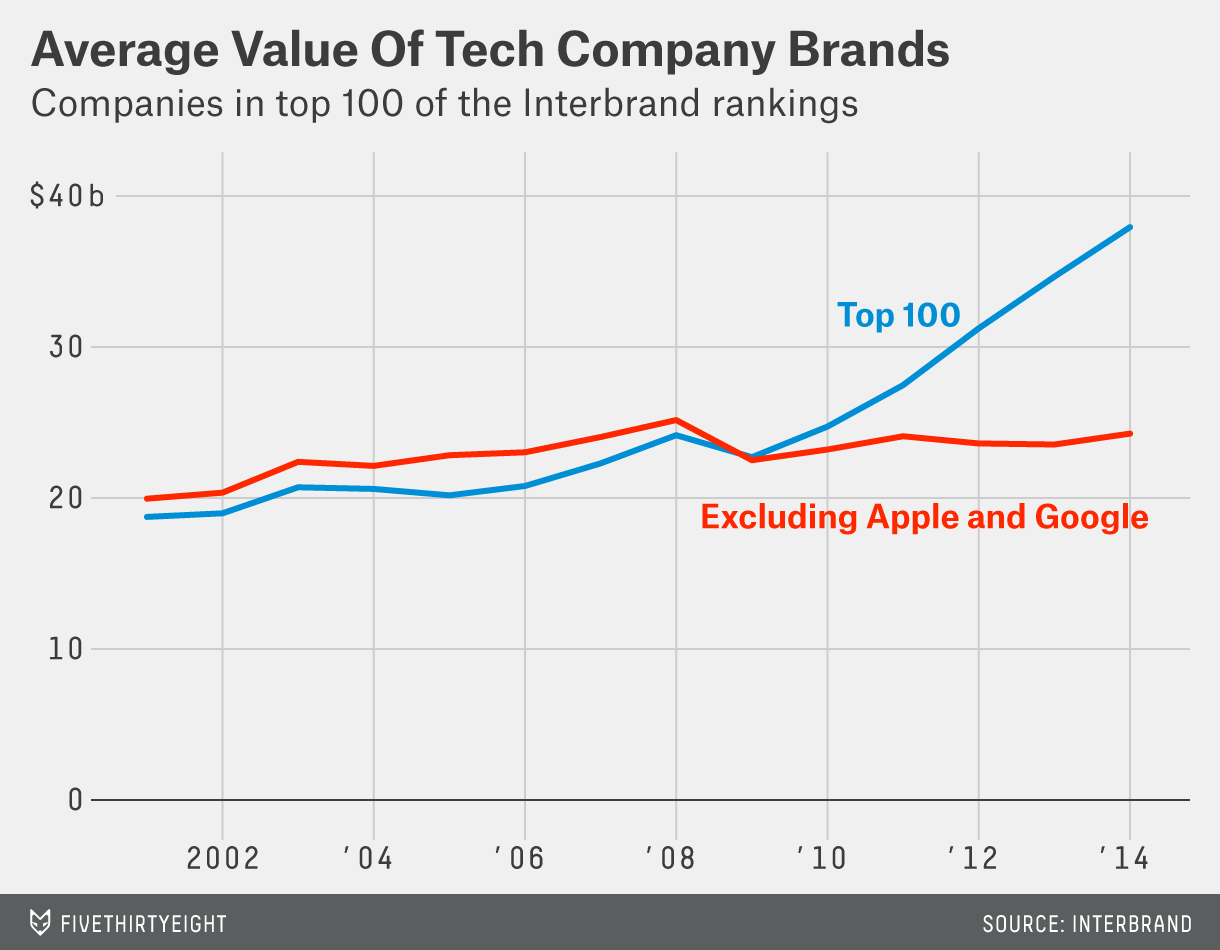 Besides Apple and Google, the typical technology company’s brand value has been flat over the past four years.

Of course, tech and brand are fuzzy concepts.

Which companies technically count as tech is up for debate. There are obvious ones, such as Microsoft, Oracle and Facebook. But how about Amazon? It’s classified as a retail company, yet its brand has risen by 25 percent in just the past year. Ebay? Also retail. Meanwhile, technology brands like Nokia, whose value has dropped like stone in the past year, weigh down the sector.

I spoke with Graham Hales, the global chief marketing officer of Interbrand, about the methodology behind its rankings. Although the method is proprietary, he walked me through the three main steps:

Luxury goods companies such as Burberry will have a higher “role of brand” percentage than companies in more commoditized industries.

But what is “brand value”? It’s hard to pin down, but Interbrand has roughly defined it as an intangible kind of business asset corresponding to a company’s identification by consumers. Think of it as a company’s trust earned — trust by customers they will get a quality product, a promise met, or an image and feeling attained.

For instance, conjure up an image for “smartphone” and you probably think iPhone.