Last week, Grantland’s Bill Barnwell put together a method to determine the fastest (and slowest) teams in the NFL, aggregating the combine and pro day 40-yard dash times for each team’s starting offensive skill players and secondary. It’s a clever way to address the nebulous question of “team speed,” but it made me wonder about alternative ways to quantify which teams are the fastest.

My idea? Use the player “speed” ratings from EA Sports’ “Madden NFL 15” video game and compute the team average for every 2013 NFL roster, weighted by each individual player’s Approximate Value (Pro-Football-Reference’s attempt to generate a single numerical value representing the quality of any player’s season, regardless of position).

By that method of computation, here were the fastest and slowest teams from a year ago: 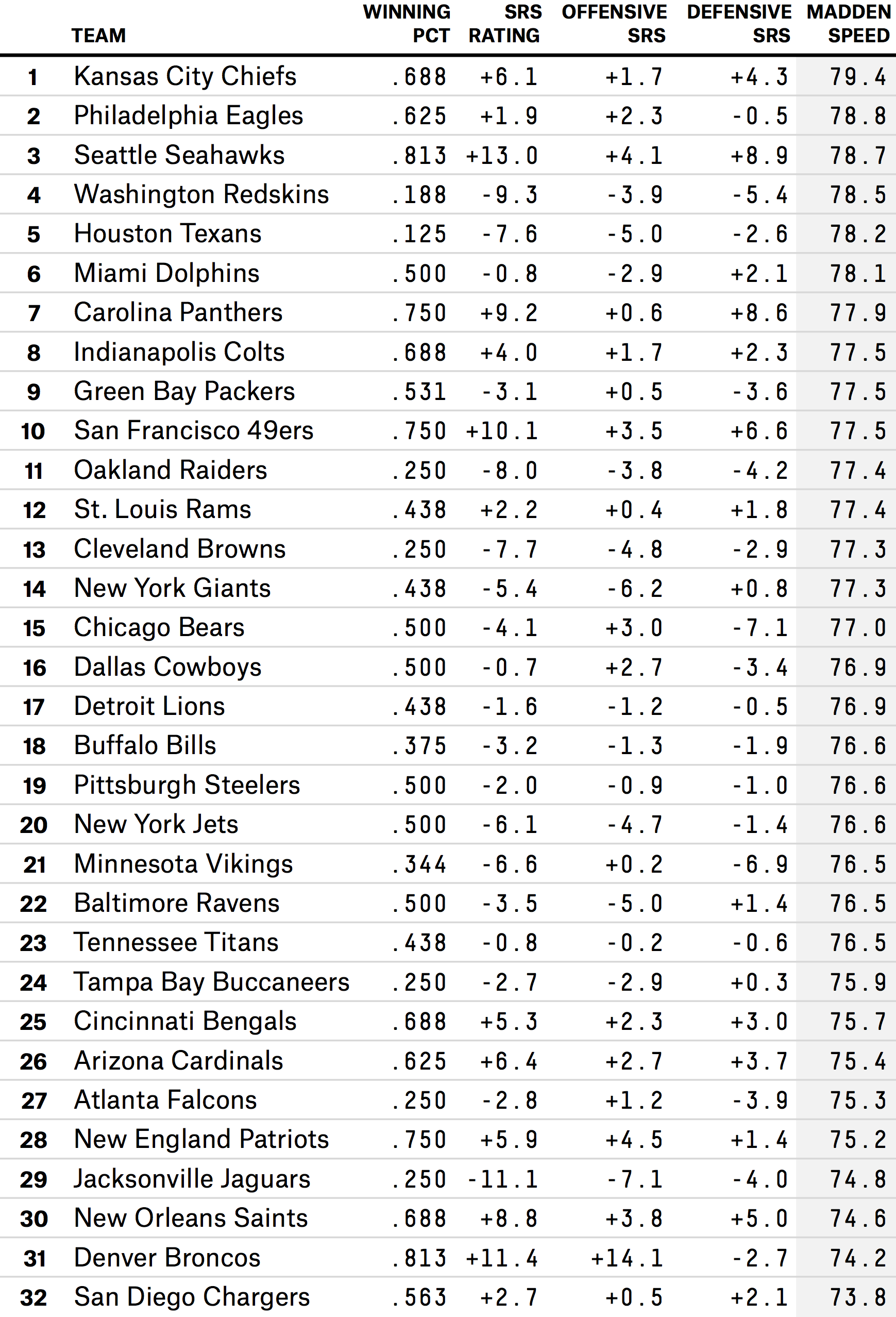 Madden ratings are, of course, subjective at their core, which makes them a matter of fierce debate each year — as you would expect to be the case when fans’ favorite players are put on trial using an arbitrary scoring system. By contrast, 40 times are objective and allow for absolute comparisons (mostly), but the only publicly available versions come from a player’s rookie year, which doesn’t necessarily offer a snapshot of how fast a player is later in his career.

In other words, there’s no perfect way to measure team speed. But there is a mild correlation, -0.31, between the Madden method and Barnwell’s process (the correlation is negative because Barnwell summed all the players’ 40 times, meaning higher is slower). And the two approaches share conclusions. Like Barnwell hinted at in his piece, speed isn’t necessarily associated with good offenses. I found a negative correlation between a team’s “Madden speed” and its offensive Simple Rating System (SRS) score from last season. (If you’re curious, defense had a very slight positive correlation with speed.)

And here’s the twist: In terms of overall team quality (as measured by winning percentage, where the correlation to speed was a paltry -0.056, or SRS, where it was -0.082), how good a team was bore essentially no relationship to how fast its players were. For instance, while the league’s three fastest rosters — Kansas City, Philadelphia and Seattle — had good seasons in 2013, Nos. 4 and 5 on the speed list — Washington and Houston — each won fewer than 20 percent of their games.

Looking at the whole league, it appears Al Davis’s all-consuming obsession with team speed was misguided. In 2013 at least, the speed of a roster was completely incidental to how well a team performed.