When we last looked at how the Republican candidates for president were faring with the facts, there had been just a few debates. But Thursday night’s debate in Jacksonville, Fla., was the 25th time at least two of the candidates have gotten together to argue. A presidential debate, like the campaign trail in general, is often an unwelcoming environment for unadulterated truth. Indeed, our last post on PolitiFact, a venture of The St. Petersburg Times that grades political statements on their validity, came while the campaign was still just simmering. But it’s come to a full boil now, and most of the candidates’ PolitiFact report cards have deteriorated accordingly.

Here are the cautions and caveats from our last post, which still apply:

PolitiFact reporters, researchers and editors grade each statement as true, mostly true, half-true, mostly false, false or “pants on fire” (the scale is pretty self-explanatory, but here is a more thorough breakdown of what each grade means).

Second — and most important — PolitiFact only looks at statements that pique its interest. Here’s how Bill Adair, the editor of PolitiFact, described the process: “We select statements that we think readers will be curious about. If someone hears a claim and wonders, ‘Is that true?’ then it’s something that we’ll check.”

In other words, if Mitt Romney says the sky is blue, PolitiFact doesn’t bother grading the statement as true. So there is a sampling bias at play here. Accordingly, the following numbers should be interpreted with caution. They aren’t perfect indicators of the honesty of each candidate, and conclusions like “Candidate X lies the most” or “Candidate Y is the most truthful” should probably not be drawn from the data.

The candidates’ updated report cards are below, paired with their grades at the time of our last post on Sept. 23 and shown as a percentage of all the statements they have had graded. 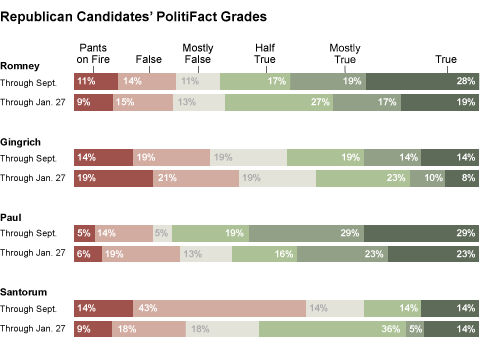 Mr. Romney, Newt Gingrich and Ron Paul have all seen their share of true and mostly true verdicts drop. Only Rick Santorum has improved the overall makeup of his report card, with more trues, mostly trues and half-trues. However, Mr. Santorum had the smallest number of statements graded at the time of our last post (seven) and still has only 22 PolitiFact verdicts now (compared to 108 for Mr. Romney, 48 for Mr. Gingrich and 31 for Mr. Paul).

Interestingly, the main shift in Mr. Romney’s report card was a bump in his share of half-true grades, and a corresponding dip in the share of his true grades. He has had 18 half-trues since our last post.

Mr. Paul, who had one of the best report cards when we last looked at this data, has been hurt the most by the campaign. Sixty percent of his new grades were rated either false or mostly false.

By PolitiFact’s reckoning, Mr. Gingrich has strayed from the facts most often. PolitiFact found more wrong than right in a majority of Mr. Gingrich’s statements that they graded. That is to say, 59 percent of Mr. Gingrich’s grades fell on the bottom half of the scale (pants on fire, false and mostly false).

Indeed, since our last post, Mr. Gingrich has earned six pants on fires, six falses, five mostly falses and seven half-trues. In the same period, he has garnered just two mostly trues and one true.

It’s possible, however, that Mr. Gingrich is adjusting. During the Jan. 23 debate, Mr. Gingrich said, “When I was speaker, we had four consecutive balanced budgets.” PolitiFact rated the statement false, pointing out that two of the balanced budgets he claimed credit for passed after he had left the House.

In Thursday night’s debate, Mr. Gingrich made a similar boast, but altered the wording somewhat, saying, “We balanced the budget with the 1997 Balanced Budget Act, and ultimately had four consecutive balanced budgets.” PolitiFact rated the revised statement mostly true.